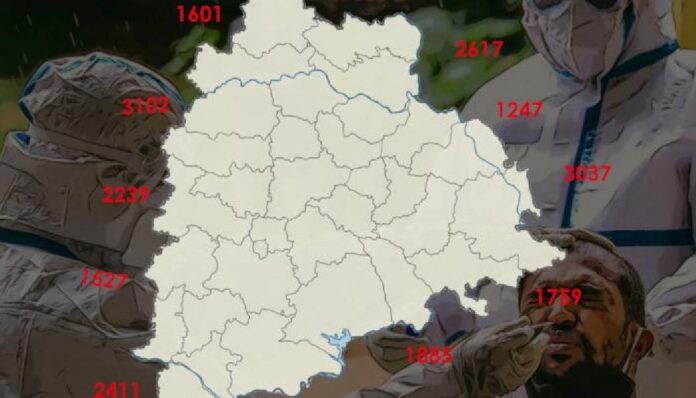 After a detailed survey and investigation, #KhabarLive has collated data and newspaper reports from 12 districts for four days in April and found large discrepancies in each and Every data release in public domain.

Since the COVID-19 pandemic began in 2020, the Telangana government has faced a barrage of criticism over its handling of the health crisis. From not conducting enough tests initially, and issuing bulletins that were inconsistent and incomprehensible to even scrapping the daily health bulletins altogether earlier in February and later retracting the move, the TRS government’s management of the COVID-19 pandemic has been pulled up multiple times by both the opposition and the High Court.

Telangana, like several other states in India, is grappling with the second wave of the COVID-19 pandemic, with cases seeing an alarming rise in recent weeks. However, TNM found that there is a large mismatch between the COVID-19 data put out officially by the state government and those that are reported by districts, which, however, are not made publicly available.

#KhabarLive accessed internal COVID-19 bulletins prepared by District Medical Health Officers (DMHOs) of two districts and compiled district data from media reports for 10 other districts for four days between April 14 and April 17.  Based on this data collected from these districts, #KhabarLive found that the Telangana government is ‘officially’ underreporting the COVID-19 case count, by more than 70% at least.

There is, however, no district data for the number of deaths due to COVID-19 during the same period. The only mortality data available is from the state bulletins.

If only these four days are considered from April, it appears that the state has been downplaying the figures in Vikarabad by 74.46%.

Adilabad: #KhabarLive looked at the data for April 16 and April 17 from Adilabad and compared both the DMHO’s report with the data released by the state health department. On April 17, the DMHO reported 324 cases while the state bulletin revealed that Adilabad had recorded only 92 cases. On April 16, the DMHO report stated that 274 people tested positive for the coronavirus, however the state bulletin claimed that only 85 people had tested positive for the virus. If the two days are considered, it can be concluded that the state had downplayed the COVID-19 cases from Adilabad by 70.40%.

Significantly, the Adilabad edition of Eenadu, the highest circulated Telugu newspaper reported on April 19 that the COVID-19 district bulletin’s release has been stopped as per instructions received from the state government.

The data that #KhabarLive has procured from two districts, is the same pattern across other districts too. A collation of Eenadu reports between April 14 and April 17, show that 12 districts in Telangana had reported 24029 COVID-19 cases, as per data sourced by their journalists from the districts.

However, as per the state government’s official tally, the same 12 districts accounted for only 6189 cases. This means that 17840 cases or 74.24%  went unreported.

In fact, a closer look at the numbers reported by Eenadu showed an increase in the mismatch of the COVID-19 figures with every passing day. On April 14, the total cases according to the data (reported by local newspapers) from the 12 districts was 5012, whereas as per the official state bulletin, the same 12 districts reported only 1245 cases – a difference of 3767 cases.

On April 15, the state bulletin recorded 1401 cases from the 12 districts as opposed to newspaper reports which said 5929 cases were reported from the districts – that’s 4528 (76.37%) missing infections. On April 16, there was a discrepancy of 4550 unreported cases by the state government, while the number of unaccounted infections according to Eenadu and others papers was 4995 or 73.03% on April 17.

It is not just Eenadu, but other Telugu newspapers too have reported the same figures, the data they sourced from the offices of DHMOs.

In the past, the Telangana government has cited a discrepancy in updating district numbers for the mismatch in figures. If you observe the cumulative data for the four days for all the 12 districts considered, the total number of COVID-19 cases as per the district data is 24029, while the state’s official tally has recorded only 6189 cases, during the same time period, in the 12 districts.

The underreporting of COVID-19 cases in Telangana is not new. In July 2020, #KhabarLive had reported the mismatch in figures put out by the districts and the state government. Instead of updating its official tally, the state, however, chose to stop the release of the district health bulletin altogether.

#KhabarLive tried reaching out to the Director of Health for a comment but he remained unreachable.

“The people need to be told how many are dying and at the same time the government should ensure there is no panic by telling people what is being done,” added Dr Sravan.

BJP’s Chief Spokesperson K.Krishna Saagar Rao alleges that since March 2020, Telangana state Government has been under-reporting health data regarding COVID-19 infections. “BJP feels CM KCR should ensure the Health Ministry does its job with sincerity and accountability towards public health. Lack of credible reporting can impair effective decision making and planning for efficient management of COVID-19 infection in the state,” he said. #KhabarLive #hydnews