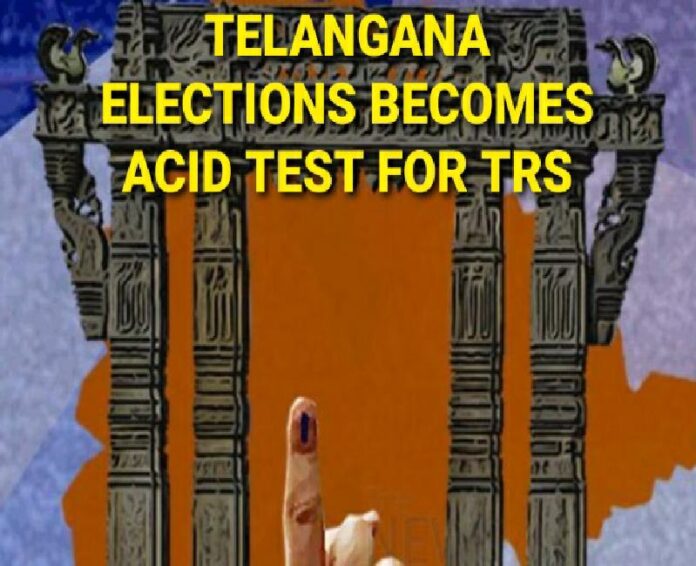 This MLC elections in Telangana becomes the acid test for ruling TRS party despite giving lots of stops to government employees, employment opportunities, pensions and lot more to lure the voters. But the outcome may decide the fate of this entire political drama.

The elections to the Telangana Legislative Council from two graduates’ constituencies. Polls in the two constituencies, each comprising three districts – Hyderabad-Ranga Reddy-Mahabubnagar and Warangal-Khammam-Nalgonda – are going to be a litmus test for the ruling Telangana Rashtra Samithi (TRS), headed by chief minister K Chandrasekhar Rao.

What makes this electoral battle more significant is that these six districts account for 75 out of 119 assembly constituencies in the state, thereby reflecting the mood of educated voters and indicating a possible outcome of the state assembly elections scheduled in 2023.

“The victory or defeat in these MLC elections doesn’t make much difference to the TRS in terms of numbers in the 40-member state legislative council, as it has huge majority with a strength of 36 members. But a defeat will indicate the voters’ perception against the ruling party which will have a bearing on its prospects in the coming elections,” opines political analysts.

The immediate impact of these elections is expected to be on the by-election to Nagarjunasagar assembly seat likely to be held in April, besides elections to Khammam and Warangal municipal corporations, dates for which are yet to be decided.

That is precisely why the TRS has taken the MLC elections to these two seats very prestigiously. The ruling party has already sensed the changing mood of the people with its defeat, albeit with a lesser margin, in the by-elections to Dubbak assembly seat in Medak district, followed by a serious drubbing in the Greater Hyderabad Municipal Corporation (GHMC) elections last year.

ALSO READ:  ‍Tenant Farmers Will Get 'Crop Compensation' Soon As Court Directed To Govt In Telangana

The TRS has taken the elections to the two MLC seats very prestigiously and mobilised all its resources to win these two seats at any cost. For the Hyderabad-Ranga Reddy-Mahabubnagar graduates’ constituency, the TRS president has chosen Surabhi Vani Devi, daughter of former Prime Minister P V Narasimha Rao.

It is a strategic move on the part of KCR since the state has been celebrating the birth centenary year of Narasimha Rao, the only Telangana leader to rise to the position of Prime Minister of the country. Naturally, the TRS wants to cash in on this Telangana sentiment.

KCR himself personally held interaction with state government employees, who constitute large chunk of graduate voters and promised them a salary hike of 29%, as against 7% recommended by Pay Revision Commission.

Since Vani Devi herself is an academician, the TRS made extensive campaign among the teaching community to attract their voters. “It is a master stroke of KCR to field her in the MLC elections, as being the daughter of the former Prime Minister, she commands tremendous goodwill among the educated voters,” analyst said.

On the other hand, Bharatiya Janata Party, which is on high spirits after its victory in Dubbak and an impressive show in the GHMC elections, is keen on repeating its performance in the MLC polls. It has once again fielded its sitting MLC N Ramachander Rao, who has huge support among the advocates, in Hyderabad-Ranga Reddy-Mahabubnagar constituency.

What makes the contest more interesting in this constituency is the entry of Osmania University professor K Nageshwar, who represented the seat twice in the past, as an independent. He is a prominent face among the educated voters.

ALSO READ:  Where Is 'Tribal University' In Telangana?

The Congress fielded former minister G Chinna Reddy and TDP its state president L Ramana, but both have very bleak chances. Besides, as many as 88 other independent candidates are also in the fray.

In Khammam-Warangal-Nalgonda graduates’ constituency, where 71 contestants are in fray, the fight is mainly between TRS candidate Palla Rajeshwar Reddy, the sitting MLC and Prof M Kodandaram of Telangana Jana Samithi.

Kondandaram, once a protégé of KCR during the Telangana movement, fell apart from the latter and floated his own regional party before 2018 assembly elections. Though he has not achieved any success in the electoral battle till now, he commands tremendous respect among the educated Telangana youth. That makes his chances of wining the MLC seat brighter.

BJP has fielded its general secretary G Premender Reddy, who has considerable cadre base in Warangal, but the party has little presence in Khammam and Nalgonda and that might prove disadvantageous to him. The Congress has fielded S Ramulu Naik, a tribal leader who was earlier a nominated MLC in Khammam-Warangal-Nalgonda constituency.

According to Political Laboratory, the TRS’ strategy of first priority vote propaganda has been successful and it helped the ruling party in a great manner.  According to the survey agency, the voters of Hyderabad-Rangareddy-Mahbubnagar voters inclined towards TRS candidate Vani Devi.

Congress candidate G Chinna Reddy may damage the second priority votes of the BJP. Chinna Reddy’s vote bank from Hyderabad, Wanaparthy, Gadwal to Jadcharla was intact. However, the TRS wave was witnessed in Jogulamba and Achhampet areas.

The survey predicted that Ramchander Rao and Vani Devi shared equal votes in Narayanpet, Kalwakurthy, Mahbubnagar areas. Middle-class votes in Hyderabad, Rangareddy Urban went to the BJP. However, rural and lower working-class votes went to the TRS in these areas. Here one has to consider the poll management as the poll percentage increased in a massive way. The TRS successfully implemented its poll management by mobilising voters than the BJP and Congress.

Regarding NLG- KMM- WGL, the TRS succeeded in poll pooling silently. The TRS candidate didn’t face any opposition at polling stations. However, these indications won’t tell anything in favour of the TRS. However, the TRS poll management instilled confidence in their candidate though Prof Kodandaram, Theenmar Mallanna and Rani Rudrama Devi are in the fray.

It is tough to tell that Theenmar Mallanna and Prof Kodandaram would trouble the BJP or the TRS. The TRS mainly depended on vote pooling, hence, it provided transport, food and other arrangements. However, indications came that the second priority votes of Palla, Kodandaram and Mallanna went to the BJP. However, the BJP has failed in poll management in Khammam and Warangal except for Nalgonda.

The polling percentage is 18-20 per cent more than the last time. The result would depend upon whether these additional votes went to the opposition party, or TRS.

These are all predictions based on opinions collected as survey, but reality always differs, the election results are on March 17, and we have to wait and see the outcome on the results day. Keep the fingers crossed! #KhabarLive #hydnews