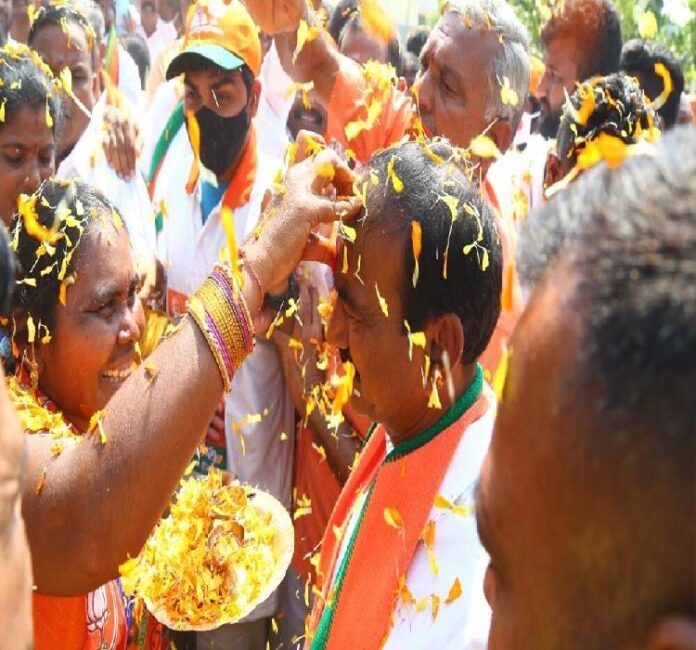 This is the question that causes concern among the top-level leadership of the TRS party though on the face of it party working president K T Rama Rao dismissed it as an insignificant poll as far as the TRS was concerned. He commented that the party had seen many ups and downs during the last two decades.

Do not overestimate the power of money. Do not underestimate the intelligence of voters. If this lesson the two main parties TRS and BJP can understand, may be the next elections will make some sense. It’s time the TRS and BJP go in for a micro level analysis.

The very fact that TRS lost in Shalapalli village where Dalit Bandhu was launched and in Himmat Sagar village of Veenavanka mandal of TRS candidate Gellu Srinivas Yadav and the areas of Captain Lakshmi Kant Rao is something which the TRS needs to introspect. They should first recognise that anti-incumbency factor is there.

From the initial reactions that have been pouring indicates that the ego bubble of the TRS has not yet burst. The reaction of the TRS working president KTR saying, ‘In the last 20 years TRS has seen many highs and lows and this one election result will not be of much significance or consequence’ gives an impression that the party is unable to digest the defeat. In Indian politics we have seen that every ruling party has a handful of leaders who act like three monkeys of Mahatma Gandhi. We will not see any evil, we will not hear any evil and we will not speak any evil. Here the evil means anything against the party. It is this coterie which refuses to see the ground reality and their feedback most of the time is so powerful that the leadership starts believing them rather than the ground realities.

Before we look at what all could have gone wrong with TRS, due credit needs to be given to Harish Rao for the votes which the TRS got in this election. Let’s see what has gone wrong with TRS. It felt that party was important and not the individual. Akin to what the then president of Congress party Dev Kant Barooah said, ‘Indira is India, India is Indira’.

Secondly, the arrogance of TRS came to fore as it started distributing huge amount of money. Along with it, the overenthusiastic leaders threatened the voters that they have record of all voters and those who did not vote will be denied benefits of welfare schemes.

Third they went on harassing and abusing Eatala. They also were under the impression that if they attack BJP on the issue of unprecedented hike of gas and petrol prices, it would get them some votes. But it did not happen.

It’s true that the prices are increasing every day. But as KCR often says “We are a responsible government, yes….,” still TRS did not bother to reduce even five per cent of the taxes the state levies on gas and petrol and provide relief. May be this would have helped them get more votes than paying anything from Rs 6,000 to Rs 12,000 per vote.

It is also a clear indication along with direct cash benefit schemes, governance is equally important. Hopefully, all political parties will realise it’s time to have a rethink and reduce the power of money in future elections.

The BJP too should not get elated over this victory. They should understand that 90 per cent of the credit for victory goes to Eatala. Hence it’s time all political parties assess who are real leaders in the party. Party is just a platform. Human resource is also important in politics.

The BJP should now stand by the people and raise the problems being faced by them at the ground level and debate on the omissions and commissions of the government if they dream to come to power in the next elections.

What the TRS is not able to understand is why even the schemes like Dalit Bandhu failed to attract the voters. According to preliminary assessment, they feel that there was a lack of coordination among the leaders who were drafted for campaign and there were irregularities in the distribution of money.

The manner in which Eatala was treated and forced out of the party had also evoked a lot of sympathy for him. The intense campaign and cadre support from the BJP were also an added factor for the victory of Eatala, feel the TRS leaders.

What has come as a major shock for the TRS was that the party had lost even in Shalapally village where the Dalit Bandhu scheme was implemented. The party leaders also feel that the TRS candidate could not match the popularity of Eatala who had been continuously winning the polls from this constituency.

The leaders felt that the distribution of money among voters had also left a negative impact on the party prospects. This led to dissatisfaction among the voters and some of them even staged a dharna stating that they were not paid, said another TRS leader. But one thing is certain that the credit for the party getting 82,348 votes to a great extent goes to Finance Minister T Harish Rao, who had left no stone unturned and had touched almost every house in the constituency. #KhabarLive #hydnews