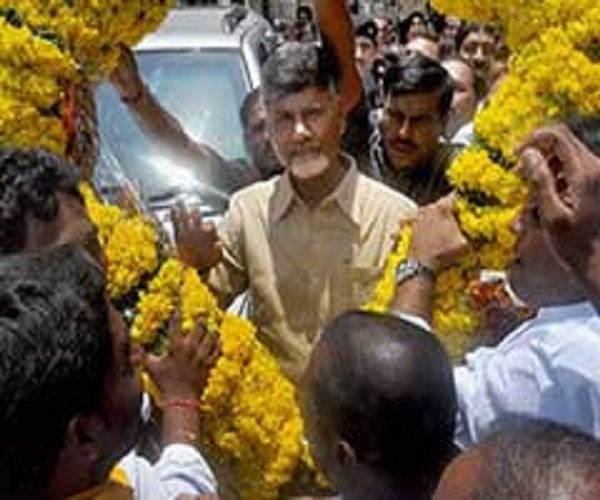 Presently, Naidu’s political party that had brought about a ‘sea-change’ in a region is now fading away from its birthplace.  This in short is the chequered story of the Telugu Desam Party in Telangana.

It was the TDP that changed the course of politics in the region by stretching its arms towards the down-trodden and the Backward Classes, and inviting them to represent various constituencies in the Assembly and Parliament.  Such was the strong foundation laid by TDP founder and matinee idol N T Rama Rao.

Of course, the prevailing political situation in the erstwhile undivided state of Andhra Pradesh was ripe for the TDP to dislodge the ruling Congress, which had been power virtually since Independence.

The TDP could establish itself soon after taking birth on 29 March, 1982 in Hyderabad. In those days, the total strength of the opposition in the Assembly including, Left parties and Janata Party, was mere 60. The brute majority that the Congress enjoyed then created an impression among the public that there is need for a viable alternative to the grand old party.  Such historic reasons enabled the TDP to emerge victorious in the 1983 Assembly elections and it was the first ever defeat for the Congress.

Some revolutionary steps like abolition of Patel-Patwari system brought the new party closer to the general public. Despite electoral reversal at the hands of the Congress party in 1989, the TDP could manage things and tried its level best to be alive in people’s minds.

One can rate the performance of TDP in the 1989 elections and arrive at a conclusion that the murder of Congress’ MLA from Vijayawada (East) Vangaveeti Mohana Ranga Rao had influenced the electorate that led to the defeat of TDP. It was a political murder that took place due to the tense local situation between two warring groups and it negatively impacted the poll prospects of TDP.

The TDP, however, registered a landslide victory in 1994. As years rolled by, a ‘change of guard’ took place in TDP as a result of dethronement of NTR. Although seen as the person mainly responsible for the dethronement, Chandrababu Naidu managed things to retain power in the subsequent elections of 1999 by aligning himself with BJP. For bifurcation of AP, the TDP had to bell the cat, as part of its political strategy to deliver a death blow to the Congress, by writing to the Union government headed by Congress party in 2008. But the Congress took the challenge as a strategy to counter TDP and moved further in the case of bifurcation. The political games of the two parties ultimately led to the bifurcation of AP.

Following the creation of Telangana, the TDP compromised its future in this region and its influence started dwindling day by day. The maintenance of the party in Telangana was smooth when it was in power in residuary AP during 2014-19.

What is the main reason for the present plight of TDP in Telangana?  Is it really possible for the leadership to rejuvenate it and bring it back on track?  Is erosion of the credibility of leadership in this region a real cause for the present situation?  These questions are making rounds in political circles as well as in public domain. The party has been in a precarious situation and could not protect its MLAs & MPs in the aftermath of the 2014 and 2018 polls.

The party’s flip-flop on the demand for separate state of Telangana made people think otherwise about Naidu. Some questions remained:  What would have happened if Naidu had taken the issue forward when he played key role in the formation of the NDA government at Centre headed by Vajpayee in 1998 & 1999?  The present chief minister of Telangana K. Chandrasekhar Rao (KCR) was a keen follower of Naidu in those days. He got an opportunity in Naidu’s cabinet as Transport Minister in 1997 and continued till the elections of 1999.

But Naidu disappointed KCR by not continuing him in the cabinet and chose to replace him with K. Vijayarama Rao, former director of CBI, as part of caste equations, presumably on the advice of his ‘guru’. This caused heartburn for KCR and that led him to part ways with TDP in the name of launching an agitation for T-state.

Had Naidu favoured bifurcation in those days and moved further in that direction,  the NDA government, which was running with the help of Naidu’s support (with 29 MPs),  Telangana State would have been realised along with the creation of three new states of Uttaranchal (now Uttarakhand),  Chhattisgarh & Jharkhand in 2000. These three states had been created following the unanimous resolutions adopted by the respective Assemblies of Uttar Pradesh, Madhya Pradesh & Bihar. On the same lines, Telangana could have seen its birth with the unanimous resolution of the Assembly of undivided AP.

Had Naidu positively moved forward on T-issue then, Telangana would have been a reality in 2000 itself. TDP would have got a golden opportunity to become first in ruling the new state as it enjoyed a majority in the Assembly of undivided AP. Probably by virtue of being staunch follower of Naidu, KCR might have been the choice of the latter and KCR could have become chief minister on the lines of Ajit Jogi of Chhattisgarh.

It is a different matter that KCR paved the way for himself to become first chief minister of Telangana on his own strength by projecting himself as the one and only warrior in realising the new state.

Now what are the options before Naidu to resurrect TDP in the new state of Telangana?  Will he find suitable ‘head’ in place of L. Ramana, who has switched to TRS?  Naidu has ruled out the chances of bringing new president for TTDP from his family. It is an uphill talk for Naidu to rejuvenate his party in Telangana as he himself caused erosion of its base due to his own policies. Only time will decide the destiny of TTDP under the leadership of Naidu. #KhabarLive #hydnews