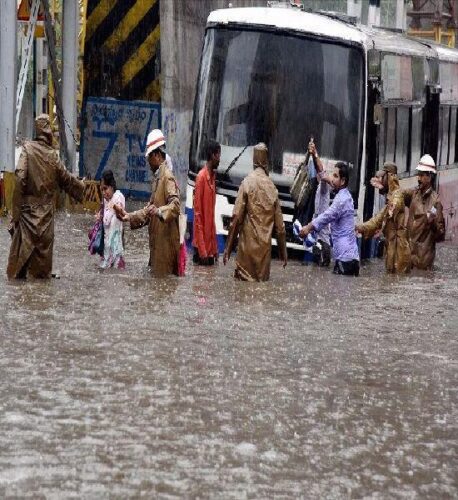 The recent rains creates havoc in Hyderabad by flooding several low-lying areas and kept the normal life at stake. The continuous rains for three days make the life terrible in Hyderabad.

Amidst heavy rains in Telangana, seven gates of Osman Sagar and Himayat Sagar reservoirs in Hyderabad were opened. This led to about 40 families being briefly evacuated along the bank of the Musi river in the city. Officials with the Greater Hyderabad Municipal Corporation (GHMC), fearing urban flooding, began visiting low lying areas along the Musi river, directing the residents to evacuate their homes and temporarily shifted them to schools and mosques.

This is not the first time Hyderabad has experienced flooding. The city faced major inundation in 2008, 2016, 2017, and recently in 2020. Excess rains in October 2020 caused floods that left close to 36 people dead, several lakh people suffering property damage and the flooding cost the exchequer over Rs 8,600 crore. To overcome future urban flooding, the city now has plans to redesign existing stormwater drains and build new drains. The Municipal Administration and Urban Development (MAUD) department began implementing the Strategic Nala Development Plan (SNDP) in January 2021, under the GHMC. The body carried out a study of the stormwater drainage system within GHMC limits and is in the process of calling tenders for projects worth Rs 854 crore. The project, however, will take a few years to complete and municipal officials say that until then, urban flooding will remain an occurrence in Hyderabad.

Recently, tenders were issued for the construction of a six-lane major bridge on the Tank Bund opposite the Marriott Hotel for an estimated cost of Rs 55.78 crore, and two other bridges costing Rs 12.75 crore. These projects also involve the reconstruction and redesigning of drains to increase their floodwater carrying capacity. “We identified a few choke points in drains and undertook a few expansion works and do carry out annual desilting of the lakes and drains but often the problem is garbage choking these drains. It affects the capacity of the present system to carry floodwater,” GHMC Chief Engineer (Maintenance), M Devanand said. The office oversees the annual desilting of lakes and the Musi riverbed using earthmovers, which is undertaken ahead of monsoon to prevent urban flooding.

The task usually begins in January. However, this year, the desilting process began only in May. “The work was delayed as a lot of cleaning work was already undertaken throughout November and December 2020 as part of clearing the flood silt. So it was decided not to undertake desilting immediately,” Devanand explained. The GHMC has spent Rs 44 crore so far this year on the desilting of 256 drains. “Desilting alone won’t prevent urban flooding. It is only aimed at keeping the drains clear for smooth water flow,” he added.

Bhaskar S Rao, president of the GHMC Contractors Association, however alleged that GHMC workers refused to undertake the desilting work between January and April this year as they were not paid for their work during the October 2020 floods. According to him, this amounted to up to Rs 40 crore. “We undertook the work in May only because the officials said it was needed to prevent another flooding. The payment for the pre-monsoon delisting work will also be delayed.

The GHMC has no money to pay us as the state government has to release funds to them,” he said.
“The delays affect our ability to bid for future projects as we are left with no capital. Many GHMC contractors have also stopped taking up the tenders due to this recurring issue of delayed payments,” he added. Though the GHMC claims that all 256 drains have been cleared, the association says that works are still pending in 40% of the areas. “We stopped the works a week ago due to the rains,” Rao added.

According to the GHMC, though it was delayed, the desilting work will be sufficient to tide over this year’s monsoon, provided Hyderabad doesn’t face unseasonal excess rainfall. “Once the projects under SNDP are executed, the city will have adequate protection from floods but even that won’t be enough if there is an excess rainfall. The projects, however, will take time to complete, there are certain areas that have been identified as encroachments. The administration is serious about removing them and plans are being drawn for the rehabilitation of the people who reside there,” Devanand said, adding that clearing up encroached areas will not be an easy task. #KhabarLive #hydnews