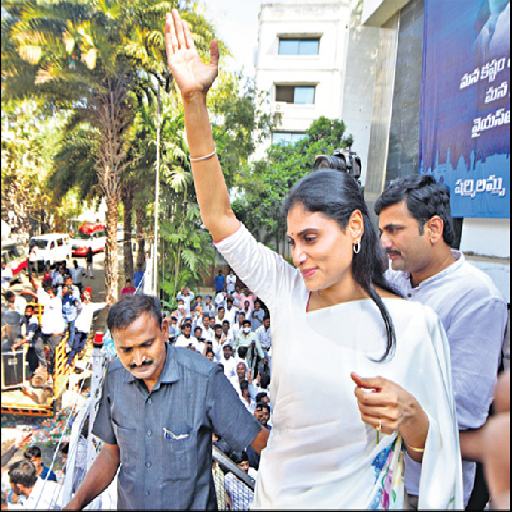 Budding politicians YS Sharmila’s new party can make a change in Telangana politics, but it remains to be seen if she will have any real impact.

Her decision is surprising, since her brother Y.S. Jagan Mohan Reddy, is the current chief minister of Andhra Pradesh and the leader of the YSR Congress Party. She has campaigned for Jagan in the past, but has not been an active member of the party.

Sharmila’s family also hails from the Andhra region, which coupled with the fact that her father was a staunch opponent of Andhra’s bifurcation, have led many to question why she was floating a party in Telangana.

The ruling Telangana Rashtra Samithi (TRS) has been the dominant party in the state. It has managed to weaken the Congress and the Telugu Desam Party by encouraging defections. While these two parties have been reduced to insignificant players, recent developments suggest there is space for other parties to grow in the vacuum left by the Congress and TDP.

Sharmila apparently hopes to exploit anti-incumbency sentiments against Telangana chief minister K. Chandrasekhar Rao, coupled with the help of her father’s legacy. A similar formula had helped her brother Jagan become the chief minister of Andhra Pradesh. During the campaign for the 2019 Andhra Pradesh assembly elections, Jagan unseated the Telugu Desam Party by promising Rajanna rajyam, or the welfare state that YSR oversaw.

Therefore, it was not surprising when Sharmila outlined her party’s three main objectives as welfare, equality and self-reliance.

Rajasekhar Reddy’s welfare and populist schemes have ensured that his legacy endures, even though he was killed in a chopper crash in 2009. Schemes like the Arogya Sri health scheme and fee reimbursement for poor students helped fuel his popularity.

YSR strongly opposed KCR’s demand for a separate Telangana state and was a proponent of a united Andhra Pradesh. Even as the Telangana movement began taking off, YSR managed to steer the Congress to victory in the 2009 united Andhra Pradesh assembly elections. Indeed, the Congress performed impressively in Telangana, winning 50 seats in the region. The TRS ended up with just 10 seats in that election, even though it had teamed up with Chandrababu Naidu’s Telugu Desam Party in a bid to defeat the Congress.

It will not be easy for Sharmila’s party to gain a foothold in Telangana, said Tirumalai Inukonda, analyst and retired professor of Delhi University.

He said that Rajasekhar Reddy was able to come to power in 2004 because of his promise of free power for agriculture in a state marked by agricultural distress and a large number of farmer suicides. After coming to power, he created a strong base among other sections with his welfare schemes.

Inukonda told #KhabarLive  that while Sharmila seems to be falling back on her father’s welfare agenda, it might be difficult to convince voters. “The KCR government has matched YSR’s populist schemes, introducing news ones which provide input subsidy to farmers and financial assistance for marriage,” he said.

What the people of Telangana are looking for now is not YSR’s legacy but an alternative political agenda to KCR’s perceived “feudal rule”, the professor said.,

In Andhra Pradesh, Jagan’s YSR Congress was able to grow after it poached the rank and file of the Congress. After the Manmohan Singh government approved the formation of Telangana in 2014, it sparked a mass exodus of state-level Congress leaders, with Jagan accommodating many of them.

It will be hard for Sharmila to poach talent in a similar way. While many Telugu Desam Party leaders have already joined other parties, the state Congress, with Revanth Reddy as its new president, is expected to be re-energised.

Sharmila is being described by various parties as an “agent” of either Jagan or KCR. Launching her party, Sharmila took potshots at all the parties. She also vowed that if she were to come to power, she would prioritise the interests of the Telangana state over any compromise with her brother, the Andhra CM.

The YSR Congress has disowned Sharmila’s political outfit. Jagan’s close aid and party general secretary Sajjala Ramakrishna Reddy said Sharmila has entered politics in Telangana against the wishes of her brother. KCR and Jagan had nurtured a partnership, which saw the YSR Congress cease its activities in Telangana after it came to power in Andhra Pradesh.

“We wish to have cordial relations with our neighbouring states, more so with Telangana. Therefore, our leader Jagan Reddy does not like to meddle with the politics in the neighbourhood,” Ramakrishna Reddy said.

Perhaps to drive home the message that Jagan was not okay with Sharmila’s move, the Andhra chief minister and his sister paid tributes separately to YSR’s grave on his birthday on July 8.

In 2012-13, when Jagan had a 16-month stint in jail, the YSR Congress would have become a rudderless boat, had Sharmila not taken the reins. Sharmila infused energy into the party’s rank and file by undertaking a marathon 3,000 km long padayatrathen.

But surprisingly, Sharmila stepped out of the political limelight after her brother became the chief minister in May 2019, which fuelled speculations that differences over sharing of power had cropped up between the two siblings. When a reporter recently asked Sharmila why Jagan did not give her due importance after the party came to power, she shot back, “You should ask this question to him.”

The result is bit evident – the Telangana people admires YRS golden rule but it seems Sharmila will face brickbats from real Telanganites, of course, some bouquets also given to her by some artificial admirers and opportunists. #KhabarLive #hydnews