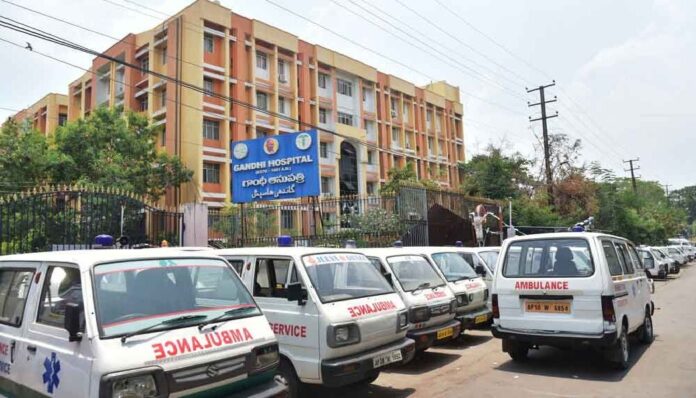 In Hyderabad, several cases have come to the fore with patients and their attendants complaining that ambulances are charging prohibitive rates even for short trips of suspected and confirmed Covid-19 patients.

Not just Covid patients but also non-Covid patients are forced to pay exorbitant amounts for ambulance service be it to take patients to hospitals for admissions or shifting the bodies for final rites.

Patients, who have fallen prey to these unchecked charges, complain that they have been asked to shell out sky-rocketing prices, even for travelling a short distance in a basic emergency.

Amid the second phase of Covid-19, Gandhi Hospital was once again converted into an exclusive Covid care facility. Following which around 900 non-Covid patients who were undergoing treatment for various ailments at Gandhi Hospital were referred to Osmania General Hospital, Chest and Fever Hospitals.

Even those being treated in the Intensive Care Unit (ICU) were discharged and sent to different hospitals or homes. All these patients had to pay for an ambulance while shifting from Gandhi to other hospitals. Vamshi Kumar, a suspected Covid-19 patient from Gandhi Hospital, alleged that he had paid Rs 7,000 for the ambulance van.

There have also been such instances of patients not getting government ambulances in time. Taking advantage of the helpless situation of people, private ambulance service providers are charging exorbitant prices to patients.

It has been learned that they charged somewhere between Rs 5,000 and Rs 7,000 to ferry patients to a hospital located just a few kilometres away. Sharing the experience of paying huge money for an ambulance, Mohammed Jahangir said that to take his brother home from hospital the ambulance charged him Rs 7,500 for the distance of 15 km.

Another patient said that when they were asked to leave, every other patient’s family members were in a panic about how they would arrange for an ambulance. “Everyone was rushing outside the hospital and were bargaining with the private ambulance service providers,” said B Satiah, who was watching the goings-on.

However, the ambulance association admitted that it takes at least three hours for the government ambulance to pick up a patient. “So, patients with non-Covid infection are also struggling to get an ambulance due to the increase in demand,” said the association.

“There is no mercy for the dead for transporting from hospital to crematorium or graveyard as they are being charged in thousands for ambulance services,” said a family member of the deceased. #KhabarLive #hydnews