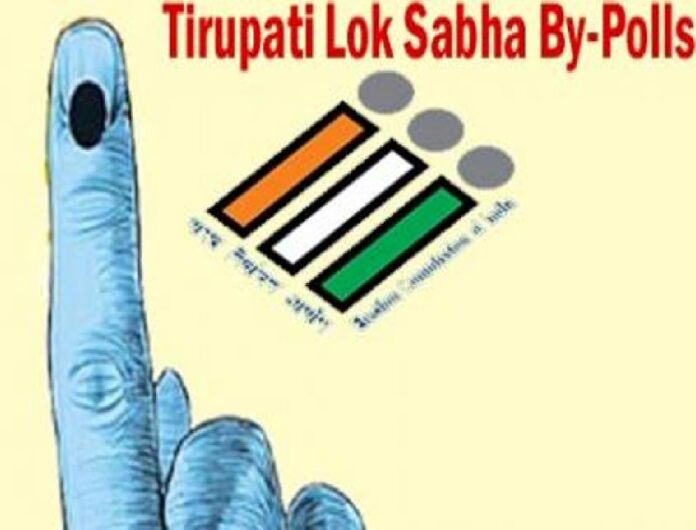 Democracy without decency! That’s the trend of electioneering by the principal political players in the electoral battlefield of Tirupati Lok Sabha constituency.

There is no place for religion, caste in democracy and politics as stated by the statute of this country. But every principal norm of electoral practice of democracy is simply and voluntarily being violated by the main contenders in the by-polls at Tirupati. Dividing people on the lines of religion, caste is prominently seen in the electioneering process.

BJP’s in-charge of Andhra Pradesh affairs Sunil Deodhar lambasted the ruling YSRCP candidate Dr Gurumurthy for not having darshan of Lord Venkateswara, despite being a Dalit. Another MLA of the ruling party in this same parliamentary constituency preferred to bear the Holy Cross on Good Friday, rather than claiming himself as a Hindu. BJP in-charge raked up this issue in the backdrop of fierce attacks made by several Hindu organizations, including self-styled ‘protectors’ of Hindutva ideology, against Dalits on various forums and social media.

Caste factor is one factor that rules the fate of elections at Tirupati. It assumed significance with the film actor and Jana Sena Party Chief Pawan Kalyan’s role in by-polls here. Initially he wanted that his party should be in the fray with support of his friendly party BJP.  But BJP’s thoughts go in a different way.  It picked up a retired IAS officer of Karnataka cadre and former chief secretary of Karnataka government K. Ratna Prabha and fielded her as its nominee with the support of Pawan.

Interestingly the same Ratna Prabha too faced court cases following Jagan’s alleged involvement in several cases, during deputation period in YSR ‘s regime in undivided AP. Now she is pitted against Jagan ‘s candidate. Tirupati is a peculiar constituency that has some predominance of Balija community.  Because of this reason only Pawan (who belongs to Kapu community) whole-heartedly wanted this seat by claiming that it would be easier for his party to win.

But with more reasons, BJP took the opportunity to contest by strategically fielding candidate from SC Madiga community with a hope to garner more votes than its competitors like TDP and YSR Congress party whose candidates are from SC Mala community.

The AP government’s acts on some issues may come in handy for the opponents of ruling YSRCP.  BJP’s alliance partner Pawan Kalyan ‘s new film ‘Vakeel Saab’ got raw deal at the hands of the state government. The intention of YS Jaganmohan Reddy  government may be good and understandable to curb the exploitation in the name of screening benefit shows with exorbitant rates. ‘Whose benefit these shows are being conducted for?’ was the question from AP Information Minister Perni Nani that made sense.

This practice has been followed since many years with the permission of successive governments.  But this time Jagan ‘s government whipped the ban on benefit shows that considerably,  adversely  influenced gross collections of the movie. Since the hero of that film Pawan Kalyan happens to be the political bête noire of chief minister Jaganmohan Reddy, this issue flared up and flames of discontent were fanned in some sections. This development may influence Balija community that has soft corner for Pawan.

Stones allegedly pelted at Chandrababu Naidu’s election meeting in Tirupati LS seat may also have some impact. TDP planned to bring this incident to the notice of Central Election Commission and AP Governor by painting it in a political colour. Who is in need of pelting stones at Naidu?  Ruling YSRCP asks. It claimed that it took place because of melee among TDP workers and it was a creation of TDP. This incident raised several eyebrows in the last leg of campaigning in Tirupati by-polls.

The BJP-Jana Sena combine would have got more mileage had Pawan Kalyan participated in the election campaign as decided earlier. The actor had to confine himself in home isolation due to Covid scare as his personal staff tested positive.

Who will have the last laugh at Tirupati, is the million-dollar question as three main contenders YSRCP,  TDP and  BJP-Jana Sena combine are relying on their carefully knitted poll strategies. They have already readied their arguments for their possible victory. If YSRCP wins the seat, it would be the acceptance of people of its 22 months of ruling and nothing but a go-ahead sign for its agenda.

What particular purpose will be served additionally on the part of YSRCP by winning one more seat?  Had it succeeded in getting SCS with 22 MPs?  These questions are causing irritation to the ruling party naturally as it on the same question earlier thought that resignations of all 25MPs would be a powerful weapon to achieve SCS. If TDP manages to get the people’s mandate, then it may be viewed as a slap on the face of YSRCP government and its policies implemented hitherto.

It would give a new lease of life to TDP that had to boycott recent elections held for zilla and mandal parishads due to lack of competitive spirit following ruling party’s winning spree in ULB and RLB polls! In the event of BJP winning the seat, it would enable the party to draw a road map for expansion in AP. It had got four Lok Sabha seats of Kakinada,  Rajahmundry,  Secunderabad and Karimnagar on its own in the 1998 mid-term polls in undivided state of AP that rejuvenated the party in the state. In subsequent elections of 1999, BJP won seven LS seats, including Tirupati with alliance with TDP.

The Congress may not be the main contender here as it has been decimated in 2014 elections itself following AP’s bifurcation. It has found a neat burial for itself due to that infamous decision.

Actually Congress candidate Dr.Chinta Mohan is considered to be the most eligible person to seek vote from Tirupati electorate with whose support he enjoyed victories on six occasions earlier besides becoming Union minister three decades ago in PV Narasimha Rao ‘s government! Such glory has become past for Congress now and there may be no signs of rejuvenation for it even in days to come.

It’s simply an uphill task for Congress to get entry into both central and state’s legislature on its own. #KhabarLive #hydnews