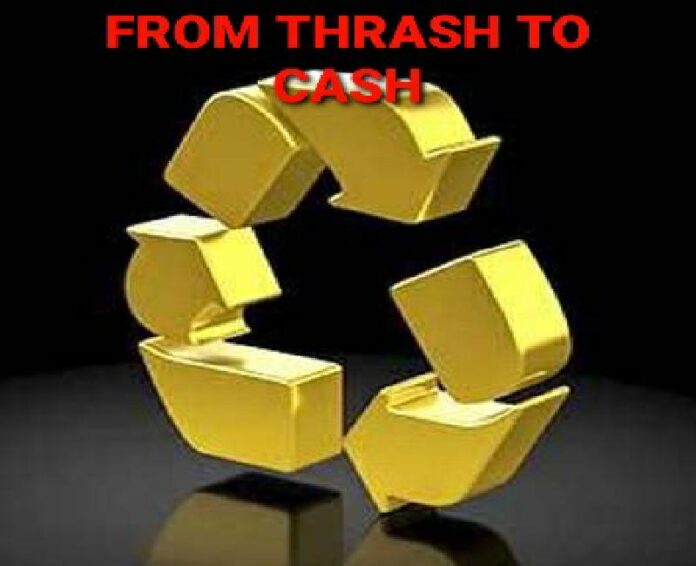 The IIT Delhi team patents eco-friendly tech  ‘from thrash to cash’ to recover fuel and metals from e-waste.

It is not unknown that there is wealth lurking in electronic waste. Some of the stuff that resides in e-waste are lead, cadmium, chromium, biphenyls and an assortment of metals such as copper, zinc, silver and gold.

A team led by KK Pant, professor in the Chemical Engineering Department of IIT Delhi, has set out to mine the wealth from electronic dumps. The result of his efforts, funded by the Department of Science and Technology, is a technology to do so.

It involves a three-step process: Pyrolysis (decomposition of materials in high temperatures), separation of metals, and recovery of individual metals.

Then, a low-temperature roasting technique is employed to recover metals such as copper, nickel, lead, zinc, silver and gold from the metal mixture. According to a write-up on the subject in IIT Delhi’s website, the process can recover 93 per cent copper, 100 per cent of nickel, zinc and lead, and 50 per cent of gold and silver present in the residue. “It is a green process in which no toxic chemicals are released into the environment,” says IIT Delhi.

ALSO READ:  How Is An 'IVF Pregnancy' Different From A 'Natural Process'?

For their project, titled ‘Self-Sustainable E-waste Recycling: Generating Wealth from Waste via Zero Discharge Technology’, the team was awarded the 2020 SRISTI-GYTI (Gandhian Young Technological Innovation) Appreciation,besides other awards over the last five years.

The team has successfully installed a 10 kg/h (kilogram per hour) pyrolysis plant for e-waste recycling at IIT Delhi. It converts all types of e-waste into combustible gases of 28 MJ/kg calorific value, liquid fuel of 30 MJ/kg calorific value, and a metal-rich solid residue. The gaseous product is primarily composed of hydrogen and methane whereas the liquid product is rich in hydrocarbons suitable for energy generation. The pilot plant is also equipped with a scrubbing system to capture halogenated compound traces in the combustible gases.

Pant says his team has successfully demonstrated the application of the technology for recycling discarded printed circuit boards, computers and mobile phones. It can also be employed for recycling plastic waste.

Besides providing a sustainable solution for e-waste recycling, the technology has the potential to generate jobs in the waste recycling industry. #KhabarLive #hydnews