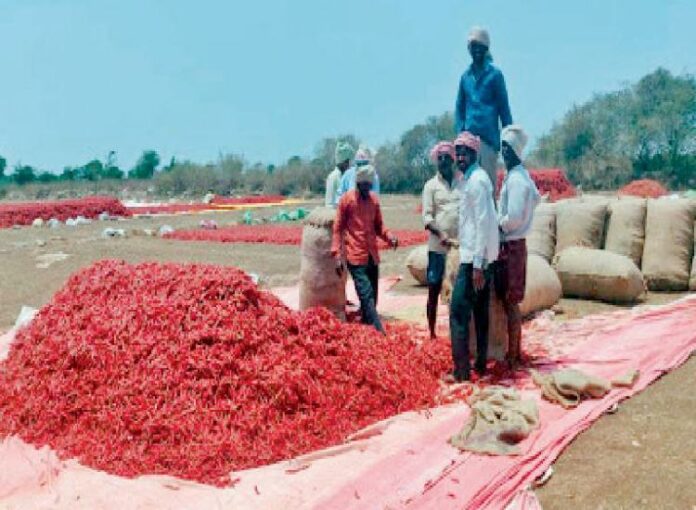 The impact of the virus is so damaging that farmers lose out on precious revenue because almost three to five quintals of the produce is lost per acre. A farmer invests around Rs 1.10 lakh to Rs 1.25 lakh per acre to raise chilli. They can earn some surplus only if they can produce over and above ten quintals per acre.

Gemini virus, which is transmitted by whitefly, causes infections like leaf-curling, leaf-rolling, wrinkling and scorching of intravenous areas. It affects chilli plants and results in dropping of pods.

K Brahma Reddy, a tenant farmer from Konigerla, said that he raised chilli on two acres against a lease amount of Rs 25,000 per acre. However, because of Gemini virus, pods fell by fifty percent. He said that he has invested Rs 2.50 lakh so far and it would be difficult to even get the input cost.

Chilli is raised on 56,000 acres in Khammam district. This is 2,000 acres more compared to the previous year. Many farmers turned to chilli as prices touched Rs 20,000 per quintal last year. Its price presently is between Rs 9,000 and Rs 14, 000 per quintal based on the seed variety.

District agricultural officer G Anasuya said that farmers should apply treckderma while ploughing the field. Crop pattern should be changed after every two to three years, she said. #KhabarLive #hydnews