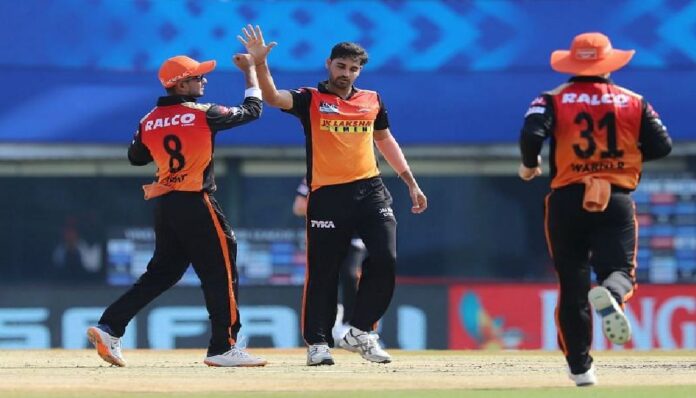 After the winning the match with Punjab Kings, the pace bowler Bhuvneshwar Kumar has given a rattling shock of hamstring injury and doctors advised him to go for rest.

Eatlier, during the match Sunrisers Hyderabad (SRH) sweating as he walked off the field during the game against the Punjab Kings (PBKS) with a thigh strain, as revealed by commentator.

Bhuvneshwar Kumar was clinical with the ball during the game and bowled a tight first over, in which he conceded only six runs. In his next over, he accounted for the wicket of the dangerous KL Rahul. The batsman ended up dragging a good length delivery straight to the man at mid-wicket.

Bhuvneshwar Kumar bowled his third over in the powerplay and finished with figures of 3-0-16-1 before he left the field. He didn’t return to the field to bowl his final over, with Siddarth Kaul and Khaleel Ahmed taking the responsibility of bowling the death overs.

With T Natarajan already sidelined due to a niggle, Bhuvneshwar Kumar’s injury could be a massive headache for the Sunrisers if it is serious. The franchise is already in trouble, having lost their first three games of IPL 2021.

Bhuvneshwar Kumar has had a history of injuries over the last couple of years. He underwent a sports hernia surgery early last year, which kept him out of action for a while.

The pacer made a comeback in IPL 2020 but was ruled out in SRH’s fourth game of the season. In a match against the Chennai Super Kings (CSK), Bhuvneshwar Kumar bowled 3.1 overs before pulling his hamstring.

Kumar immediately walked off the field, and after subsequent scans, it was revealed that he would be ruled out for the rest of the tournament. The pacer then underwent a lengthy rehabilitation process and got back to action last month.

Bhuvneshwar Kumar featured in all the five T20Is against England in March and was quite impressive with the ball. He picked up four wickets while maintaining an economy rate of 6.38 and followed this up by picking up six wickets in the three-match ODI series.

So far in IPL 2021, Kumar has accounted for three wickets in four matches and conceding over nine runs per over. #KhabarLive #hydnews