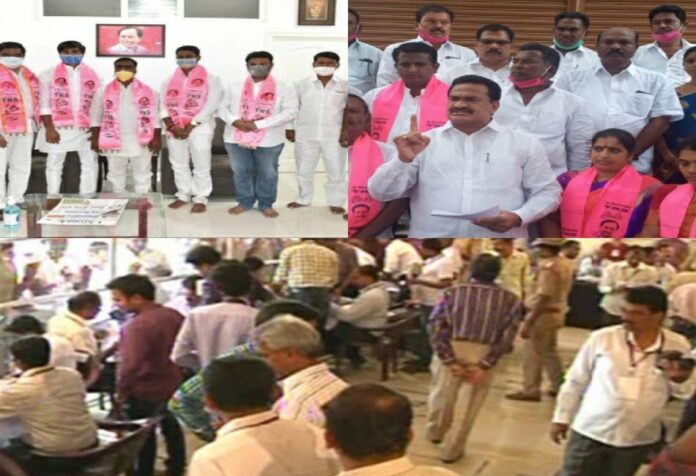 It is evident that TRS party constituency level leadership is unhappy with their bosses and colleagues with widespread differences in party activities and decisions. This leads to groupism politics supported by internal conflicts in the party.

Intra-party squabbles in the TRS come to the fore in the presence of party MLC Kavitha and Minister for Roads & Buildings, Legislative Affairs and Housing Vemula Prashanth Reddy recently.  The fight for supremacy between the two TRS leaders surfaced at a private event attended by the MLC and the minister.

In fact, in many constituencies, similar circumstances prevailed in the district. Zilla Parishad chairman Vithal Rao and Armoor MLA Jeevan Reddy entered into a wordy duel in the presence of Kavitha and Vemula Prashanth Reddy at the inaugural function of a private bio-plastic plant inauguration in Lakkampalli SEZ in Nandipet mandal on Monday. The minister had to intervene and pacify the clashing leaders.

The incident, which took place in the presence of two ministers and the MLC, is soon on the lips of everyone in the party. The Zilla Parishad chairman, Vithal Rao, breathed fire on the MLA, Jeevan Reddy, for obstructing him with the help of the police to prevent him from taking part in the event. Prashanth Reddy had to intervene and calm the clashing TRS leaders.

In the Armoor constituency, the fight for supremacy between Vithal Rao and Jeevan Reddy reached a crescendo. The two leaders are charting their independent course of action whether it is taking part in the inauguration of development works, or implementing the Palle Pragathi programme.

Earlier, such an incident was reported in a programme held at Makloor. The dispute came to the notice of TRS supremo K Chandrasekhar Rao for resolution.

Latest incident once again exposed the differences among the TRS leaders. In Nizamabad’s urban constituency, too, the same situation prevailed. At the time of the last elections, TRS politburo member and senior leader AS Posetty launched a scathing attack on MLA Bigala Ganesh convening a media conference. The issue created a lot of sensation at that time.

Before the 2018 Assembly elections, MLA Baji reddy Goverdhan and former MLC Bhupathi Reddy did not see eye to eye in Nizamabad rural Assembly constituency. The fight for supremacy has come to an end with finally Bhupathi Reddy quitting the TRS.

In Vemula Prashanth Reddy’s Balkonda Assembly constituency, the internecine clashes among TRS leaders did not come to the fore so far. At the time of the last Assembly elections, former Speaker of the Assembly KR Suresh Reddy joined the TRS giving rise to speculation that there would be a fight for supremacy between Prashanth Reddy and Suresh Reddy. But, so far such incidents did not come to the fore.

These quarrels did not limit themselves to the Armoor constituency alone. In other constituencies, too, more or less such a situation prevailed. In Bodhan, local MLA Shakeel Amair, local municipal chairperson’s spouse Sharat Reddy also engaged in such a clash. The differences between the two did not surface, but Sarath Reddy is seething with discontent with the unnecessary intervention of the MLA in the affairs of Bodhan municipality. The TRS leaders are understood to have plans to take their issue to the notice of TRS deputy supremo Kavitha. #KhabarLive #hydnews