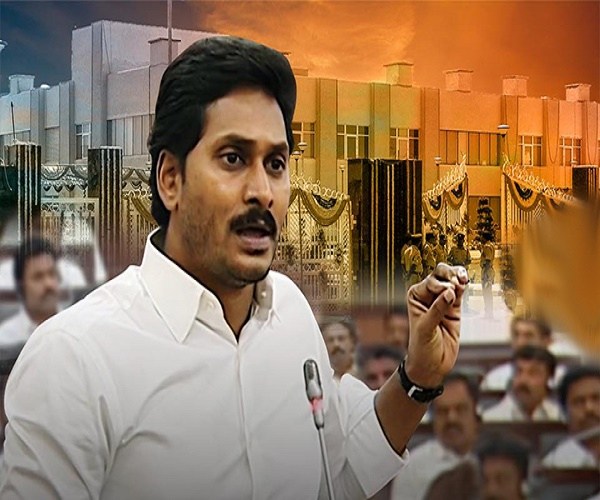 The victorious YSRCP in Andhra Pradesh since in power from May 2019, Jagan Reddy’s YSRCP has won elections at all levels in Andhra — parliamentary, assembly, municipal & panchayat with thumping majority.

Cut to 2021, Jagan’s winning streak continues despite the debilitating Covid pandemic that saw the state, at one point, rank among those with the highest active caseloads. Experts say the CM’s welfare schemes amid the pandemic are what helped give the party a big boost.

Neither local body election is contested directly on a party symbol; instead candidates are backed by political parties.

The victories are another feather in YSRCP’s electoral cap — it has now won elections held at the parliamentary, assembly, municipal and panchayat levels since coming to power.

In the panchayat polls held this February, probably the first major electoral challenge after the 2019 assembly polls, the ruling party had managed a similar sweep by winning more than 90 per cent of the seats. These polls too are not directly contested by parties.
In the municipal elections held in March, the YSRCP secured more than 98 per cent of seats.

“…Even during Naidu’s regime (from 2014 to 2019), we saw the TDP win local body polls. That is because there is a mindset among people that local bodies should not be against the state government,” Rao told #KhabarLive.

However, he pointed out that the margin of victory YSRCP has been claiming is unprecedented.
“What we are seeing in YSRCP’s case is a landslide victory. That was not the case earlier and this is something unprecedented.”

Meanwhile, for Naidu and his Telugu Desam Party (TDP), the principal opposition party in Andhra, the losing trend has continued.

In both the ZPTC and MPTC polls, Naidu’s own Kuppam constituency was lost to candidates backed by the YSRCP — all four ZPTCs and more than 95 per cent MPTC seats.

In districts such as Chittoor, Srikakulam and Guntur, once considered TDP strongholds, YSRCP-backed candidates won more than 95 per cent of the seats. The opposition party had in April said it would boycott the polls as it claimed the electoral process lacked transparency.

According to Rao, what is working in YSRCP’s favour is Jagan’s focus on welfare schemes amid the pandemic. Despite the economic worries brought on by Covid, the CM had ensured no welfare scheme was halted. To this end, the government faced a lot of flak from the opposition for borrowing heavily and diverting a majority of these amounts to welfare schemes.

There are at least 28 welfare schemes being run by the Y.S. Jagan Reddy government, of which 23 have Direct Benefit Transfer (DBT). While a majority of the beneficiaries are women, there’s a scheme for everyone, from fishermen, barbers to washermen and tailors.

“During the pandemic, many lost jobs, were income-less, businesses shut down and it was hard to survive. At that time, imagine if you’re getting some money in the form of schemes, will people not be satisfied?” Rao said.

“This turned out to be a major boost to Jagan’s rule. Not once did any welfare scheme stop and he made sure of it. Even salaries to government official were delayed, but people did not miss out on welfare schemes … and this became their oxygen.

In May this year, Jagan had said around 1.41 crore of the total 1.6 crore households had benefitted from at least one of his welfare schemes, and that Rs 95,528 crore has been given to state residents via DBT in the last two years.

Another Rs 37,000 crore had been given to voters via indirect schemes such as interest-free loans to small traders, medical fee reimbursement and so on.

The state had also announced a Rs 10 lakh fixed deposit for children who lost both parents during the pandemic.

In June, the state government said it had spent about Rs 1.3 lakh crore on welfare schemes. The state had also borrowed at least Rs 1.27 lakh crore in the last two years from the Centre, pushing the state debt up to Rs 3.84 lakh crore. Before Jagan came to power in May 2019, the state’s total debt till March that year was Rs 2.58 crore.

The TDP has tried to counter the ruling party’s victory march by playing up Jagan’s religion — the CM is Christian. However, that ploy clearly did not work given that in the temple town of Tirupati, the YSRCP managed a comfortable victory in the Lok Sabha bypoll held in April. The party candidate won by a vote margin of 2.7 lakh votes.

That in a state like Andhra Pradesh, where caste equations dominate the political landscape, YSRCP has managed a series of wins is unusual, say analysts.

According to senior political expert Purushotham Reddy, the ruling party’s vote share has not seen any significant change from 2019, indicating that caste equations have neither particularly changed nor have loyalties shifted.

“There has hardly been a 4-5 per cent increase in vote share. And it is not like Kammas have started voting for Jagan or the backward communities have shifted their support … they still remain loyal to their leaders. But, it looks like they might have refrained from voting,” Reddy said.

He also pointed out how Jagan’s decision to scrap the Kapu community reservation — the five per cent Naidu had granted before the 2019 polls under the Centre’s scheme of 10 per cent reservation to EWS sections — earned YSRCP the support of OBC sub-castes.

“Kapus will anyway vote for Pawan Kalyan. Naidu expected to win their votes with the reservation and earned ire from other backward community castes for this massive reservation promise. Jagan strategically scrapped the reservation; this did not hurt his vote bank, rather it earned him votes from OBCs,” Reddy said.

The difference in vote share has made all the difference for the TDP. The party’s waning fortunes have continually cost it. Following its 2019 poll defeat, a number of TDP’s members defected to YSRCP, from legislators to ground cadre and mid-level leaders. In some cases, leaders joined the YSRCP just 48 hours before polls.

What started as an anti-incumbency sentiment against Naidu, has now only grown stronger with Jagan’s welfare schemes, said Reddy.

“This is not a small thing for TDP, a party with a history of more than four decades is being crushed now in AP,” added Rao.

Meanwhile, the BJP and the Congress, both national parties, are as good as absent when it comes to Andhra. While the BJP has one MLC, the Congress has no elected representatives in the state.

Rao noted that for the Congress, lack of unity within the state unit, formidable candidates with regional support and ground cadre has made the party practically invisible. This for a party that consistently gave Andhra a CM for decades, which included Jagan’s father Y. S. Rajasekhar Reddy who was elected for two consecutive terms in the 2000s.

During the 2014 assembly and Lok Sabha polls, the Congress bore the brunt of bifurcation as Andhra voters blamed the central government for the creation of Telangana. Subsequently, a significant number of party cadre moved to the YSRCP given their allegiance to late CM Y. S. Rajasekhar Reddy, Jagan’s father, explained Rao.

“Even the PCC chiefs (Sailajanath and Raghuveera Reddy) held minister posts in the past, but do they have a strong ground appeal? They do not,” Rao said.

The BJP, which never had a strong presence in the state, is similarly floundering. It has no ground cadre or regional leaders to speak of. Consistent with their pro-Hindutva ideology, the party has instead tried to dent support for Jagan by playing the religion card.

“The BJP and even TDP ran this entire campaign on how there are ‘increased’ attacks on temples under Jagan’s rule. There were a spate of attacks last year. Looks like all of that did not have much effect,” Rao said. #KhabarLive #hydnews