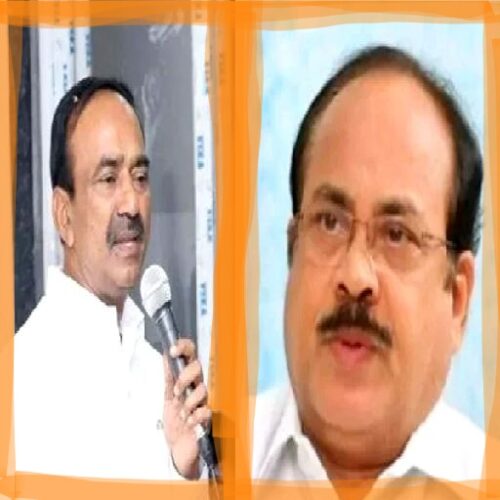 The main cause of worry to handle the groupism politics in forthcoming elections. On the same, BJP in Huzurabad is apparently split into two groups, as one group supporting former minister Enugala Peddi Reddy and another supporting Eatala Rajender makes the scene more confusing.

As such, Eatala Rajender, who joined the BJP in Delhi, returned to Hyderabad amidst tumultuous welcome by his large posse of fans.
Eatala is reported to be facing rough weather in his Huzurabad due to alleged non-cooperation by the BJP seniors.

Eatala not calling on Peddi Reddy, who is incharge of Huzurabad Assembly constituency, even for the sake of courtesy and not seeking his support has become a moot point in the party circles.

Peddi Reddy, who plans to run for the next Assembly elections from Huzurabad, set up his office and running the party activities.  He found himself in a bind, with Eatala, resigning from the TRS and joining the BJP.

Peddi Reddy was apparently angered at the party elders not taking him into confidence while admitting Eatala into the BJP.

It may be recalled that Peddi Reddy, at a recent media conference, warned of an impending tsunami in the party if Eatala was admitted into the BJP. However, he questioned the BJP leadership for taking a decision without consulting him.

Peddi Reddy’s aides feel that it is not just suffice for Eatala to join the BJP consulting the leadership at Hyderabad and Delhi. Going by Eatala not consulting Peddi Reddy, his followers try to reason saying that Eatala would only encourage only those who have crossed over to the BJP from the TRS.

Several councillors of the BJP in Huzurabad and many single window directors have resigned from the BJP to join the TRS.  When approached for his clarification, Peddi Reddy said that he reached Hyderabad to get his father admitted to a hospital. He claimed that he has no intimation about the field officers’ meeting. “As my father is indisposed, I reached Hyderabad to get him admitted to a hospital.”

Not only Eatala, but also the top leaders of the BJP in the constituency are apparently not giving due respect to Peddi Reddy, causing severe indignation to his followers.

They accuse Eatala of not even giving information to Peddi Reddy about the rally taken out by him in Huzurabad soon after his return from Delhi.

Some say that the information was sent to Peddi Reddy only on the date of the rally, objecting to the practice.

An ordinary mandal level BJP leader called up Peddy Reddy to alert him about field officers’ meeting, causing much heart-burn to Peddy Reddy.

Later, district unit of the party president Krishna Reddy called up Peddi Reddy to inform him about the meeting.

The invitation circulated through WhatsApp about field officers’ meeting included the names of Bandi Sanjay, Eatala Rajender and district in-charge Premender Reddy, sending out a message that Peddy Reddy has nothing to do with Huzurabad Assembly segment. This has upset the Peddi Reddy’s followers.

A senior leader in the party, who wished not to be named, criticised that Telangana president of the BJP Bandi Sanjay should learn how to respect the party seniors. #KhabarLive #hydnews