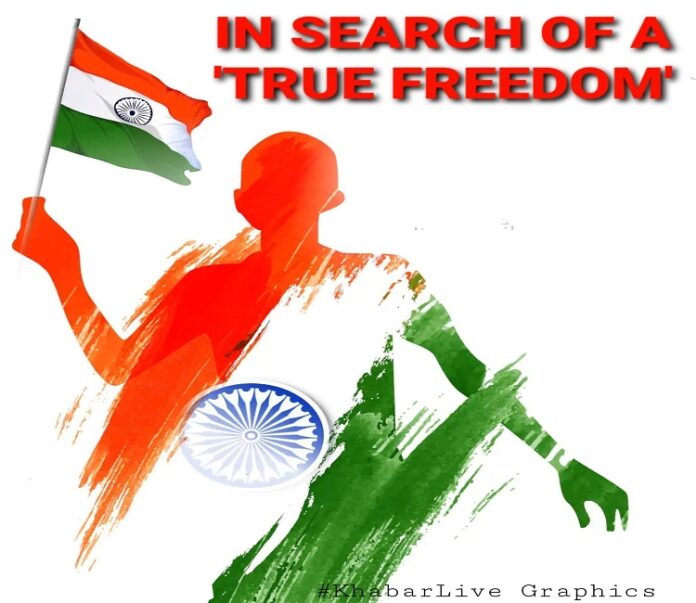 Despite many achievements in various fields deserve huge applause 75 years since independence, social freedom is still elusive and nowhere seen. As the story of India’s successful non-violent struggle has inspired many thoughts and movements across the globe, and it is one achievement that every Indian should feel proud of it.

The Prime Minister has in January rightly appealed to people to write about freedom fighters and events associated with India’s independence. It is important that we remember the men and women who have the generous concern and the brave commitment to sacrifice their prime days for our today.

We have come a long way from those days of channelizing our main resources, thoughts, and energies for the development of the primary sector and eradicating extreme poverty. The transition of India from being an entity composed of different princely states with individual interests to a country that not only stands united today but fought patriotically as one against external aggressions is no mean achievement by any yardstick.

Today, our significant advancement in science and technology, defence, literature, medicine, and the economy at large has captured the world’s attention so much so, India today is regarded not just as an economic powerhouse but also a responsible world leader. That India’s ambition to be part of the UN’s permanent seat garnered overwhelming support from many countries is a testament to the fact that we are no longer a country with a begging bowl.

It is however prudent to ask Is India’s growth inclusive. If India lives in its village, as Gandhiji had said, the progress of the nation should thence be measured by the condition of the villages in India. The question which then arises is- “Are our villages self-sufficient today?”

Renewed focus on Subhash Chandra Bose and his Indian National Army is a heartening development, as freedom struggle, in as much as we would love it to be, is not just about Gandhiji and his followers. Also noteworthy is the little yet significant development in the acknowledgement of tribal movements in the North East, long ignored in mainstream narratives of India’s freedom movement; that native writers had to undertake painstaking efforts to rewrite the forgotten stories from scratch notwithstanding, several articles and books have appeared on the subject in recent times.

However, taking the opportunity to evaluate the progress we have made so far, and more so the challenges faced, there are some glaring unfortunate developments and the lack of concrete remedial initiatives thereof that is worth contemplating today.

The fact that hundreds of years of exploitation in the hands of the British have finally ceased for good is a momentous occasion worth celebrating in any sense. Sadly though, a country formed on the underlying principle of non-violence has seen domestic violence right from the moment it was unchained. 75 years later, even as our achievements in many fields deserve applause, social freedom is still elusive to us.

We still have certain sections of our society that have witnessed countless exploitations and discrimination. What will freedom mean to those thousands of families living in the slums of Mumbai and to the hundreds of thousands of Adivasis who are subjected to social stigmas even today? They may be free of exploitation from foreign force but are facing the same hardship if not graver from their countrymen, and there is certainly no guarantee that the latter is milder to tolerate.

Social divisions such as -Hindu- Muslim, North-South, and the high caste-low caste exists below our artificial portrayal of a socially unified Indian, which manifested into unfortunate incidents on many occasions. In the words of Dr. B R Ambedkar, ‘So long as you do not achieve social liberty, whatever freedom is provided by the law is of no avail to you.’ The issue of social disparity is an issue as old as our civilization. The British made good use of it to further their agenda of divide and rule.

Seventy-four years after the British left, it remains ever fertile to seeds of discord. It is a collective failure on the part of those running the government thus far and no political party can claim to have no responsibility for it. If the present government has received flake for introducing controversial bills in parliament like the Citizenship Amendment Bill and the Instant Triple Talaq Bill, the governments before have been accused of failing to address social disharmony efficiently, if not ignorant of it altogether.

While the economic impacts of the unprecedented onslaught of the pandemic are surely felt by many countries and it will be incorrect to measure India’s growth development based on current situations, the prevalence of extreme poverty, loss of livelihood and the aforementioned lack of social freedom is a concern India cannot overlook in its effort to portray the India shining image; this should be a commitment irrespective of which party rules.

For India to therefore effectively play a role as a world leader, it has to focus on its domestic issue. We might have comparatively fared better considering our Independence is not even a century old. But seventy-five years surely could have placed us in a far better position than we are at present.

It will be a befitting tribute to our freedom fighters to ensure that the freedoms they have fought and laid their lives for, are thriving and blooming today in the world’s largest democracy. Happy Independence Day! #KhabarLive #hydnews