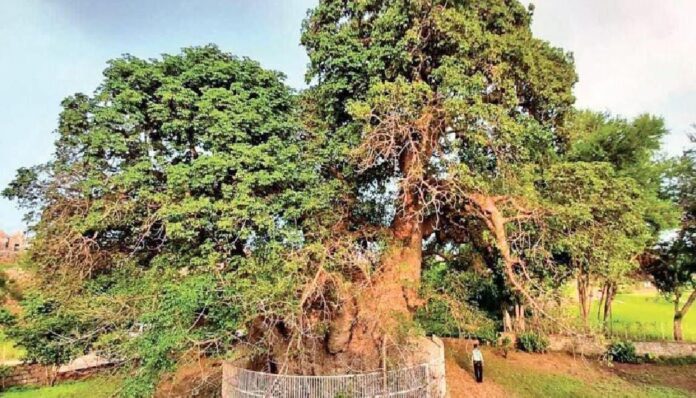 Hyderabad’s own ‘Sleepy Hollow’, a 500 years old Hathiyon ka Jhaad, lives on and stays strong in the Golf Course at Naya Quilla of Golconda fort in Hyderabad.

As the myth goes, the tree’s most intriguing feature is its hollow — big enough to accommodate 40 people.

Over 500 years and counting, Hyderabad’s own Sleepy Hollow, Hathiyon ka Jhaad, lives on and stays strong in the Golf Course at Naya Quilla. It has witnessed the harshest of calamities, changing weather patterns and rapid urbanisation, but still remains deep rooted in the Deccan soil.

Known for its massive circumference of 25 m, the Baobab tree is native to Madagascar and was brought to Hyderabad by fakirs centuries ago. It got its name, Hathiyon Ka Jhaad, because of its gigantic form and wiry folded trunk which resembles an elephant.

While the tree provides breathtaking views regardless of the season, it is in its element during the monsoon, especially when there’s a light drizzle and a cool breeze. To preserve this rare element of the Deccan history, a grilled enclosure has been installed around the tree.

Is it possible to have more such trees in our city, which out live us to bear fruit and shade for the generations to come? Historian Mohammed Safiullah believes so. “Probably the reason why this tree could live this long is because it has mostly been cut off from human habitation and interference. I wonder what stops the Horticulture Department from regenerating more such trees. It can experiment with techniques such as dwarfing,” says the deputy CEO of the State Wakf Board and the honorary managing trustee of the Deccan Heritage Trust. He goes on to add that the officials can try using its branches to grow more such trees, which would eventually grow up to this size.

As the myth goes, the tree’s most intriguing feature is its hollow — big enough to accommodate 40 people. There’s an interesting story behind this. During the Qutub Shahi rule, a group of 40 notorious robbers hid inside the tree during the day and committed crimes throughout the kingdom at night. One fine day, someone found smoke billowing out of the tree and in no time sentinels were dispatched to look into the issue. To their surprise, they found the thieves cooking and living a cozy life in the tree. #KhabarLive #hydnews