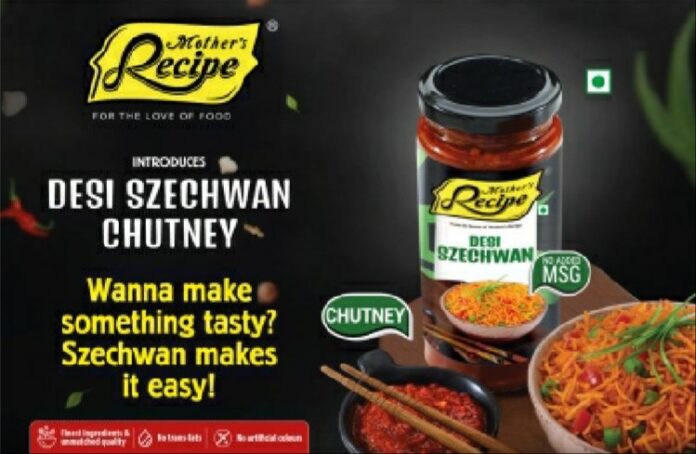 The Szechwan chutney, an Indo-Chinese fusion sauce, has become a kitchen staple in India. It is adaptable beyond being just a condiment. This tasty, yet versatile chutney adds a burst of flavours to dishes, and allows home cooks to experiment with fusion flavours.

Mother’s Recipe, under its subcategory called ‘Recipe’, has launched ‘Desi Szechwan chutney’, which marks the brand’s entry into international foods and global cuisine.

According to the ‘India Chinese, Hot & BBQ Sauces Market Outlook, 2023’ report, the overall market for Chinese, hot and barbeque sauces in India is anticipated to reach more than Rs 700 crore in 2022-23.

Due to the increasing appreciation of the customers for different cuisines, increased retail consumption, easy availability of sauces, etc., the market has grown with a CAGR of more than 15 per cent during the review period starting from 2011-12 to 2016-17.

Desi Szechwan chutney from the ‘Recipe’ brand is a perfect blend of spices, along with chillies, ginger, garlic and onions. It is an absolute treat to your taste buds. You can use this tasty chutney with almost anything and everything. It can be used as a dip or to stir fry. It can be added to rice/noodles, or as a marinade for paneer or chicken.

Shailesh K Khurana, chief Operating officer at Desai Brothers (Mother’s Recipe brand), points out that the brand operates in categories apart from pickles. These include the likes of cooking paste, readymade chutneys, papads, sauces, and also curry and rice mixes.

He adds that the company was in the Chinese sauces business much before it entered the Szechwan sauce category – by way of acquisition of a sauce brand named Elmac, roughly eight years ago.

“Chinese sauces are very popular in the eastern part of the country. We acquired the whole brand and its operations to build a presence in the Chinese foods space in India. That space, in India, is made of products like red chilli sauce, soya sauce, Szechwan sauces and so on,” says Khurana.

“This is a segment we’ve been monitoring for the past 10 years. We expect this whole category to grow to around Rs 500 crore by 2023. The category is growing at a CAGR of 15 per cent, roughly, year on year.”

Khurana adds that the portfolio of Mother’s Recipe products has penetration in different channels in India – namely general trade, modern trade, modern retail, and e-commerce. The Szechwan chutney was first launched on e-commerce platforms and Khurana mentions that the company is actively working to generate trials among consumers with a pack that is priced at Rs 10.

“We’re also using social media to build the brand and increase visibility among our audiences. We have found that in general, the younger generation is more likely to buy our products than the previous generation. They are more open to trying new products and brands.”

“We want to be a partner in making food better, not to replace food itself. If you’ve cooked a meal, we want to enhance it, not compete with it. The product will not take away from the food that is cooked, in terms of taste. The ‘Recipe’ brand stands for being a cooking aid, not a rival.”

Talking about the challenges brought on by the 2020 COVID-induced lockdown, Khurana says that at the time of lockdown, distribution was, indeed, a challenge. E-commerce, as a distribution platform, saw tremendous growth for the company at the time, as modern trade and retail outlets were shut.

“Every nook and corner in general trade became relevant for the company. It was a channel that was left out in the past few years, but it is seeing increased relevance. There had to be a drastic and quick change in the way that we communicated with our audience too. OTT platforms saw an increase in relevance and we had to adapt to the change that we saw happening in the world around us.”

Kalyan Karmakar, a food consultant, recalls that Mother’s Recipe is a brand that has been around for a long time. It has a certain equity associated with it. “In the past, we never considered brands and home cooking so closely. However, now with Mother’s Recipe, you immediately associate the name with traditional food or home-cooked food and so on.”

“When you see a brand like Ching’s with a Szechwan sauce or a hakka noodles product, it seems to fit more naturally in our minds. But with this brand, the term ‘Mother’s Recipe’ is dominant. Using just the word ‘Recipe’ as a brand name for this new line of products doesn’t hold a lot of meaning,” Karmakar explains.

“Szechwan sauce isn’t typically something a mother has a recipe for in any case…,” he muses.

As far as the Rs 10 price point for sampling sachets goes, Karmakar points out that with the habit of ordering in, one also gets accustomed to receiving small packets of mayo, sauce, etc., along with the food. “This will be an easy way of getting the customers acquainted with the product. If this sauce isn’t used as regularly as any other popular sauce, then it makes sense to make it available at this price point.”

Divyapratap Mehta, founder of consulting agency Intertwined Brand Solutions, points out that Mother’s Recipe, as a brand, is best known for its pickles and cooking pastes. He adds that the concept of a ‘Mother’s Recipe’ can differ in a country as diverse as India. In India, eating habits vary according to state, religion, and so on.

Mehta has worked as national planning director at Publicis in the past and has roughly nine years experience in the field of strategy and planning. He feels that the company has stayed within the context of ‘Mother’s Recipe’ by introducing this product. The Indian mother is also evolving. Szechwan and Desi Szechwan are a major part of the Indian palate anyway.

“It makes sense from a business perspective, as there is a market for these products. Chinese food is consumed by the masses in India, and you can find it even in the remotest corners of the country. Indo-Chinese food originated in Calcutta and it’s become very popular throughout India. There are so many Chinese restaurants owned by Indians too,” Mehta concludes. #KhabarLive #hydnews