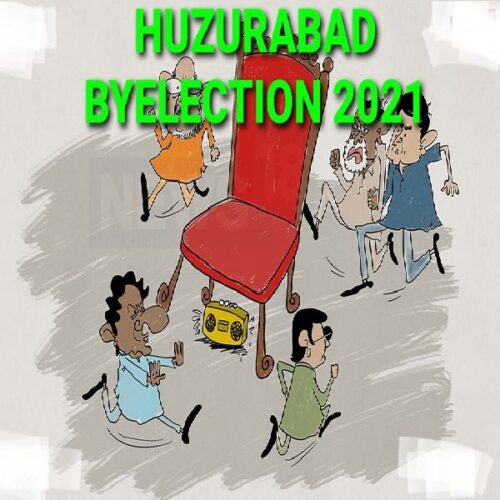 An interesting political fight for a byelection seat turns into a prestige war. Each party which are in fray showing its supremacy in political game. A fantastic political drama is unfolding in Telangana.

Each party has worked out a script and wants to test its efficacy during the Huzurabad elections. Sharmila’s performance in the last few days is nothing but a repetition of the kind of theatrics Andhra Pradesh had witnessed when YSRCP was in opposition.

The most interesting part is the lateral entrant Sharmila of her new party YSRTP feels that aping the strategies adopted by YSRCP in Andhra Pradesh would give similar results, TRS wants to see that there is no political space for any other party to even call themselves as major opposition. The BJP on the other hand wants to use the Huzurabad byelection as another steppingstone and is firing the guns over the shoulder of former minister Eatala Rajender.

For example, recently she held a meeting with youth. If one watches the video clips going viral on social media, it shows that all-out efforts are on to make people believe that she is the savior of Telangana which is gripped by problems and that it is not a rich state as being claimed by TRS. A young man on the stage had superb voice modulation and delivered his lines perfectly in an emotion-choked voice saying he had lost his parents and does not have a job and pleaded with Sharmila saying “Akka (Sister), you should stand by us. This government has done injustice to youth,” etc. What followed was equally interesting. She went near him patted him on his back, took the microphone and said, “I will stand by you and will make you people stand on your legs.” The slogan is akin to what Jagan had said during his walkathon. “I have heard you. I am there for you. (Nenu Vinnanu, Nenu Unnanu).

ALSO READ:  How To Make Correction In Aadhaar Card Without The Mobile Or Registered Number?

The real twist comes here. The Congress party has come out with another video clip of the same person which shows that he is an employee in some organisation and is part of the orchestra team. It is going to town with the video clips asking people not to get misled by such theatrics.

On the other side, the BJP cadre has already launched door-to-door campaign for Eatala. Here, too, some element of drama is taking place. The cadre has been distributing wall clocks and seeking votes. One of them created ‘hulchul’ in Huzurabad by shouting at the cadre that they have no right to seek votes as Eatala had done nothing for the constituency and even destroyed the wall clock.

The ruling TRS party too adopting a multipronged strategy. Chief Minister K Chandrashekar Rao is coming up with a slew of announcements for different sections of society. He is also getting ready to announce modalities for implementing the recently announced welfare scheme for SCs. At the ground level, party leader Harish Rao is ensuring that the cadre consolidates the vote bank in favour of TRS. The party working president, KTR, has deputed teams to assess the people’s mood and the strategies being adopted by opposition parties. He wants to prove the point that the party that matters more than the candidate.

In short, Huzurabad has now become a ground for show of strength for all parties. And very interesting to see the winner of this multi-cornored fight. Ultima  the result will show the area of dominance and winner.  Let’s wait and see. #KhabarLive #hydnews