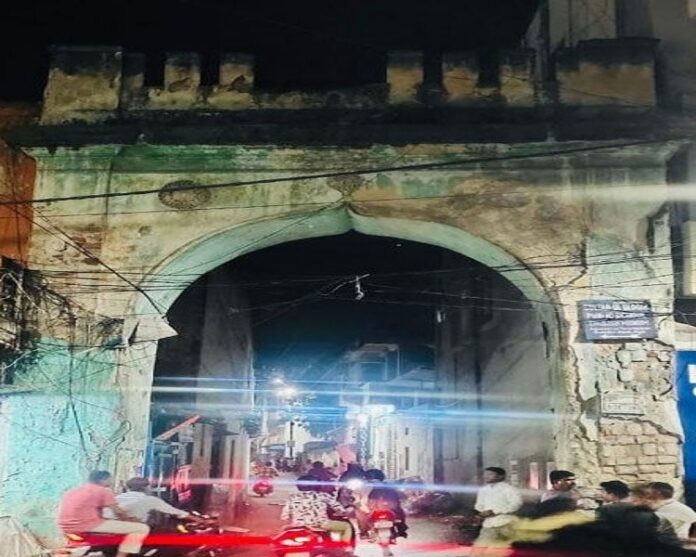 The historical monuments are in sheer neglecting in Old City areas of Hyderabad.  They are crying in dilapidated state for renovation and attention. In this category, the historic Hussaini Alam Kaman is one focussed in this report.

A historical arch known as Hussaini Alam Kaman (gateway) on the busy road between Doodbowli and Hussaini Alam has been in dilapidated condition for the last several years. The condition of the historic structure continues to pose a serious threat to commuters as well as the inhabitants.

Locals expressed their concern over the Kaman’s condition and also the other historic structures in Old City and pleaded with the government for the restoration of historic Kaman to prevent any incident. Activists said that there are several such historic arches and other structures which needed to be repaired, as these age-old structures are facing utter neglect by the State government.

Amjadullah Khan, the spokesperson of Majlis Bacho Threek said that despite the crumbling condition of the monument many people pass under the Kaman every day and it is the major road for the commuters reaching Doodbowli towards Hussaini Alam. “Observing the condition of the Nizam’s era Kaman and also the safety of citizens, it has to be renovated as earliest,” he added.

“The structure needs immediate attention or else the parts of this entrance will collapse. Due to lack of maintenance, the plaster is gone and only broken stones remain which is posing danger.”

Even after several representations to the authorities, no official has ever visited the historic structure. No initiative has been taken to renovate the arch which is continuing to pose a threat. The condition of the arch is in a dilapidated state where the chunks of roof and walls continue to fall. Commuters passing through the Kaman are unaware of the threat,” said Shaik Kareem, a resident.

The situation is worse during the monsoon. It is a worrying issue that, during rain, the mud falls from the wall and roof. Earlier, the Kaman was inspected by local leaders, but no one came again to work out a solution,” said Naveen Kumar, a nearby shopkeeper.

Recalling the recent incident, Amjadullah Khan said that after a part of a dilapidated arch at Sultan Shahi, Bela fell on a person leaving him critically injured. A portion of Kaman was also demolished by the authorities in last year’s flood. “To prevent such incidents and protect the citizen’s life the Kaman has to be renovated,” he added. #KhabarLive #hydnews