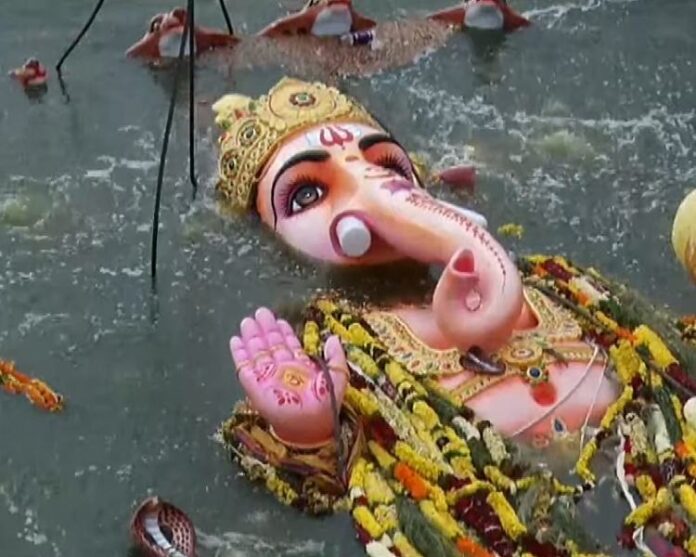 This year despite the severe protest by environmental lovers and high court of Telangana, later the decision of the Supreme Court to ban immersion of PoP Ganesha idols is a move that should be welcomed by all. This issue had been a bone of contention for past many decades. Now, we have to stop it in the name of god.

It is unfortunate that Bhagyanagar Ganesh Utsav Samithi which shows reverence towards the lord did not feel it necessary to see that they did not add to the pollution of the water, which is part of Pancha Bhutas, one of the five elements of nature.

It has always been more of a fight for one-upmanship between the so-called torchbearers of Hinduism and the government of the day which always buckled under pressure and allowed immersions in Hussain Sagar lake.

It was more of a blind argument that it was part of religious tradition – which is not correct. It has been only a practice and there is lot of difference between tradition and practice. This practice of open celebration of Ganesh Navaratri was first started by the ‘Father of Indian Unrest’ and there is a history behind it. In 1857 Sepoy Mutiny took place.

This rebellion posed serious threat to the rule of the East India Company. At that point of time, Bal Gangadhar Tilak felt that there was need to unite Indians and believed that nothing more can bond people than a common idol equally worshipped by all and turned a private household Ganesh Chaturthi celebration into a public event.

The practice of organising it as social and religious function began in 1893 and the puja mandaps served as a meeting place for the common people cutting across caste and community barriers and defied the ban of social and political gathering by the British.

This practice which began in Maharashtra later spread to Gujarat and some other states and in 1954 it was imported to Hyderabad.

But over a period, unhealthy competition of display of wealth crept in, leading to huge Ganeshas made of PoP coming up at every street corner in different shapes and themes.

This marked the beginning of alarming pollution of lakes and rivers. People forgot that pollution kills the organism in water that not only keeps it pure and healthy, but also keeps common pests like mosquitoes in check.

If one looks at Hussain Sagar, it cannot be restored to its original form though there has never been lack of money for cleaning process. What was lacking was will power by the rulers of the day. Australia first gave close to Rs 10 crore and offered technological assistance.

Japan International Cooperation Agency gave Rs 310 crore between 2006 and 2012. The Netherlands Embassy gave monetary assistance to the tune of Rs 74 crore for the Greater Hyderabad Environment Project. In 1994, the Centre had given Rs 694 crore to protect 10 lakes across the country, which included the Hussainsagar.

Though immersion of PoP idols in water bodies is illegal and banned by CPCB, successive governments did not think of creating artificial ponds. The move started only recently.

Now, in the wake of the apex court not permitting immersion of PoP Ganeshas in Hussain Sagar from 2022, one has to see what measures the government would take for immersion of the huge idols. Better late than never. #KhabarLive #hydnews