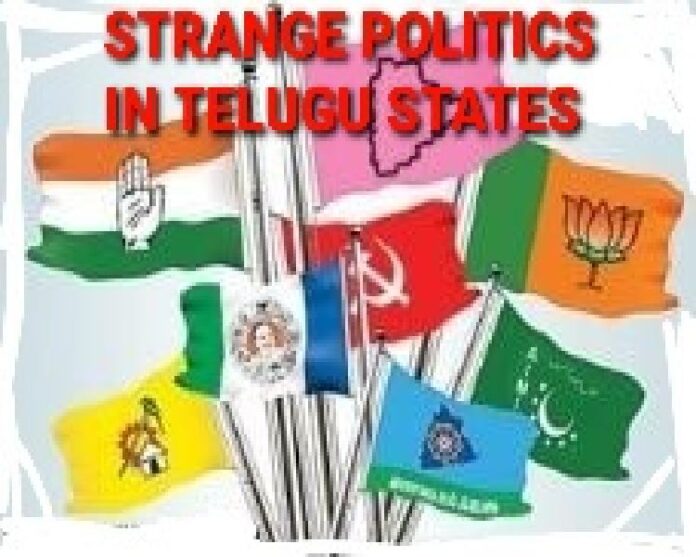 Always people pin-point on strange happenings in politics and same is the present scenario in Telugu States of Telangana and Andhra Pradesh.

There is no better example of the saying “politics makes strange bedfellows” than the two Telugu States where allies and friends, rivals and enemies acquire an entirely new definition.

But the Jana Sena struck an alliance with the TDP at some places in the recent ZPP and MPP elections. TDP and Congress have joined hands with each other in TS while in AP, the Congress is a big ‘no’ for the TDP.

TDP leaders fear if they join hands with Congress in AP, the ‘sin’ of State bifurcation will stick to their party, and their standing among the people will go from bad to worse.

The people of AP still see the Congress as the villain of State bifurcation. In the two Assembly elections after bifurcation, the party has not been to win even a single seat in residuary AP. Keeping this in view, the TDP will not have an alliance with the Congress in AP at any cost.

In Telangana, a contrary situation prevails – here, State Congress leaders vehemently oppose any alliance with TDP. However, under pressure from the party high command, the Telangana Congress leaders grudgingly accepted a tie-up with the TDP in the last Assembly elections. Perhaps as a result of this alliance, the Congress failed to win a sizable number of seats in the previous assembly elections in Telangana in spite of support by TDP and other opposition parties.

However, in the changed political scenario in Telangana, the State Congress now wants to continue the relations with TDP and the latter seems to be positively inclined.

In Andhra Pradesh, the TDP is ready to have an alliance with the Jana Sena, which officially is an ally of the BJP.

After the rout in the last Assembly elections in Andhra Pradesh, the TDP has tried its best to woo the BJP and revive their past relationship. However, the BJP is not ready for an alliance with TDP as it remembers the bitter experience of the past.

ALSO READ:  Why The Humble 'Sehri' Is My Favourite Part Of Ramzan?

Rebuffed, the TDP is now trying to woo Jana Sena. Political observers say that a TDP-Jana Sena combination would be far more potent than a BJP-Jana Sena alliance, in AP.

On its part, the Jana Sena is gradually distancing itself from the BJP and veering towards the TDP. Its backing of the agitation against the Union government’s decision to privatise the Vizag Steel Plant and supporting the TDP in the MPP elections indicates this.

There is every chance of the TDP, Jana Sena and Left parties coming together in AP to take on the ruling YSR Congress Party.

At the same time in Telangana, the Congress, TDP, TJS and Left parties appear to be headed towards an alliance against the ruling TRS.
These alliances may be the result of the TDP in Andhra Pradesh and the Congress in Telangana having realised that they cannot defeat the ruling parties in their respective states on their own. #KhabarLive #hydnews