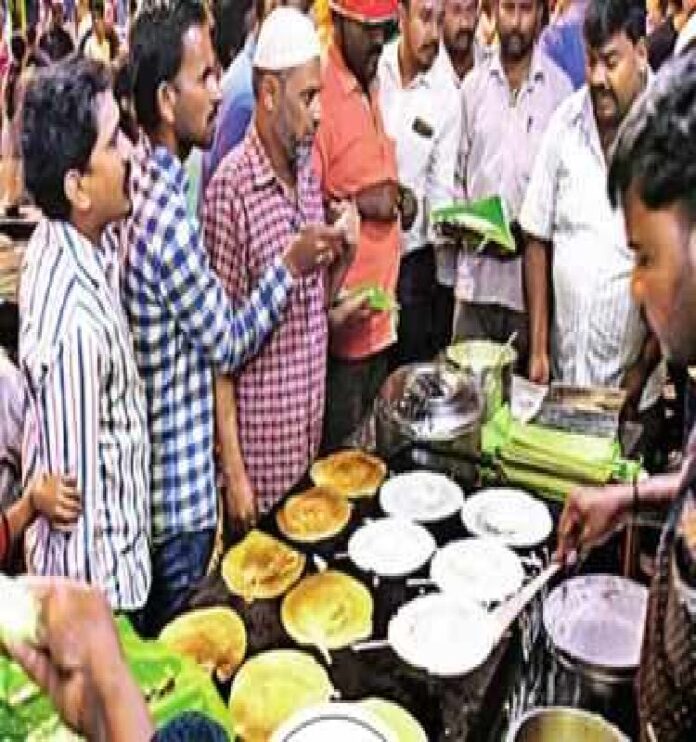 Steep rise in oil prices have made food more expensive. And daily wagers who struggle to find work have less money to spare in Hyderabad. The agony and apathy of food vendors is horrible.

It was past 3 pm when Venkataiah ate his first meal – a bowl of rice with daal and on side of vegetables bought from a streets food vendor in Ashok Nagar. The 50-year-old rickshaw puller had started work at 9 am, but he had barely made enough to pay Rs 30 for the plate of food, even though it was Rs 20 cheaper than at the stall he frequented earlier.

As he ate, Venkataiah worried about how to pay for his next meal. “There is so much costly affair [inflation] and no guarantee of what I earn in a day,” said he said, who is from Mahbubnagar disyrict and lives alone in Hyderabad. He usually sleeps at a night shelter in Ameerpet. When there is no space there, he sleeps on the footpath. These days, his daily earnings rarely cross Rs 300, of which he spends Rs 150 on food and other essentials.

Lalita Rao, who ran the food stall where Venkataiah had bought his meal, also complained about “price rise”. To run the stall, she must buy vegetables  rice and flour. The biggest daily expense, however, is the cooking oil. Lalita uses palm oil, among the cheapest of edible oils. Even this costs het Rs 130 per litre. In May this year, edible oil prices reached an 11-year high – palm oil prices had gone up by 54.5%, year on year.

“There is no profit because everything is expensive,” said 32-year-old Lalita Rao, who started the stall in August after the restaurant she worked at shut down. “There is no action being taken against this. Why is the government not paying attention?”

ALSO READ:  Can Modi Govt Save Itself From ‘Damage’ Caused By BJP IT Cell?

“Price Rise” is a word that crops up in every conversation around the food stalls in Hyderabad. For daily wage workers, it is a double blow. The lockdown to contain the spread of Covid-19 last year and devastating second wave of the pandemic had already depleted their earnings. Now, soaring food prices have meant there is less to eat for the same amount of money.

Street food vendors, meanwhile, struggle to keep businesses afloat. While their daily costs have gone up, the slightest increase in prices can drive away their customers, among the poorest in the city.

As of July 2021, India’s urban retail rate of inflation, measured year on year, was 5.8%. Much of this was driven by a sharp rise in the price of edible oil and fuel. The urban inflation rate for cooking oils and fats was 27.9%. The urban price of pulses, a food staple, went up by 8.9%. The overall food and beverages inflation rate in urban areas was 5%.

Fuel prices, which rose by 14.1% in urban India between July 2020 and July 2021, have periodically driven up food costs in Hyderabad.
In the food stalls of the State capital, the effects of inflation are painfully evident.

Bhagwan Das, who runs a stall in Moazamjahi matket, tried charging Rs 50 for a plate of paratha and vegetables instead of the usual Rs 40. He switched to the old rate when he started losing regular customers. “People do not have the money to spend,” said 22-year-old Das.

After the lockdown last year, Das had started cutting costs. He used the slightly cheaper palm oil, instead of soybean oil. “There are not too many customers so why should I spend so much on the oil when I continue to spend on the vegetables and gas?” demanded Das. “Before the lockdown I served around 100 plates and now I am serving barely 40.” Rising vegetable prices have also driven cauliflower off his menu.

Ganesh, who also runs a stall in Chatminar, stuck to Rs 30 per plate. “My rates are the lowest and if I increase them then there are nine other food stalls on this street where my customers can go,” he said.

But since Ganesh has not changed the oil or vegetables he uses, his earnings have taken a hit. Fuel prices have also gone up – on September 1, the price of liquefied producer gas, or LPG, cylinders was hiked once again. The price of a cylinder is currently Rs 950. After spending Rs 700 per day, he barely makes Rs 1,200.

“We are just getting by and I cannot close the stall because I have my children to look after,” Ganesh said.

Even though lockdown measures have eased, thinning crowds have hit business. Deepak, a food vendor in Tolichowki, now charges Rs 50 per plate instead of Rs 30 but is still suffering losses. Before the lockdown last year, he employed 12 workers, each earning Rs 300 to Rs 400. Now, he employs just three. “There is not much work left, now that there are barely any customers,” he said. If business did not pick up by Ugadi, he said, he would shut shop.

No work, no food

Many of the workers who frequent these stalls buy food from what they earn that day. But many such daily wage workers said finding work had become like winning a lottery.
Take 47-year-old Sudama, who had been standing at the labour chowk in Mehdipatnam since 8am daily. At noon, he gave up and went to eat lunch at Deepak’s stall.

“Earlier, we would stand here and all of us would have got work and gone home by noon,” said Sudama, who is from Bihar’s Munger district. Before the 2020 lockdown, he regularly got work as a skilled labour, making about Rs 300 per day, and had no trouble paying Rs 3,000 as rent for the room he shared with four others.

According to a survey by Azim Premji University, as of September-October 2020, the earnings of casual and daily wage workers had fallen by 13% in one year. About 90% of the respondents said they had reduced food intake during the lockdown. By the end of 2020, the survey found, the food intake of 20% of the respondents had still not improved. The effects of inflation and the second wave of the pandemic are still being measured. But the food stalls of Hyderabad paint a bleak picture.

For workers like Sudama, buying lunch now means eating into meagre savings. “If I do not earn then I just sleep hungry,” he said. Sometimes, he heads to the nearby gurudwara to eat at the community kitchen. “There are so many of us who are dying of hunger here,” he said. #KhabarLive #hydnews