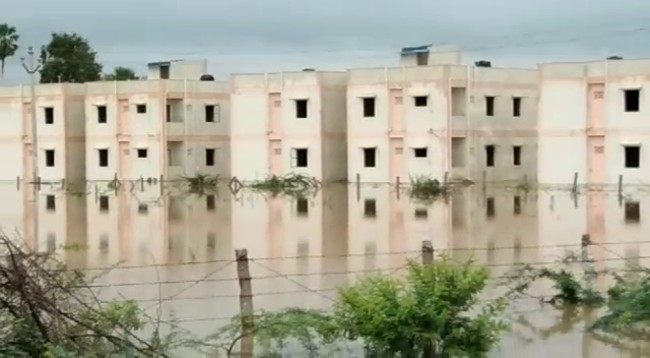 The much-hyped welfare scheme of Telangana government is 2BHK Houses for poor and needy. And some alloted houses across Telangana, the residents of 2BHK houses said that the rains caused heavy damages, and asked officials to repair the houses.

The recent incessant rains in parts of Telangana have revealed the questionable quality of construction and choice of location for some of the 2BHK houses built under the double bedroom subsidised housing scheme by the state government. In Siddipet district, in an R&R (rehabilitation and resettlement) colony for families displaced by the Mallannasagar reservoir project, the rains have resulted in water seeping through the roof and walls in multiple houses. In one house, the floor caved in, causing the furniture in the house to topple. A TV screen mounted on the wall also came crashing down onto the floor. They have expressed concerns over the structural integrity of the houses, requesting officials to repair them.

Nagamani, one of the residents of the R&R colony who had moved there from Yeti Gadda Kistapur, which is one of the villages affected due to the project, said, “I was visiting this house and standing right outside when we heard sudden noises. The TV fell down onto the floor, and so did the chairs. We have been very scared since then. We gave away our valuable lands for Mallannasagar and came to live here, on our sarpanch’s assurance, without making any fuss, but the houses are of such quality. We request Chief Minister KCR and other officials to fix these houses.” Another resident said that it felt like an earthquake had occurred when the objects caved in.

ALSO READ:  Is Modi Govt Killing 'Bitcoin' To Launch Its Own 'Lakshmi'?

Residents of the colony said that the rains have led to cracks appearing in the walls and water has been seeping in through the roof and walls. “Such small rains have caused so much damage. What can we expect in the days to come?” a resident questioned, requesting officials to repair the damaged houses. The R&R colony, situated in Mutrajpally in the Gajwel-Pragnapur municipality of Siddipet district, has around 2,500 2BHK houses and 3,000 open plots, spread over 600 acres.

In Vangapalli of Yadagirigutta mandal in Nalgonda district, 2BHK flats under construction were seen heavily inundated, with water flooding the entire ground level of the buildings. With Alair and Yadagirigutta seeing excess rainfall, a red alert has been issued for low-lying areas in the region. #KhabarLive #hydnews