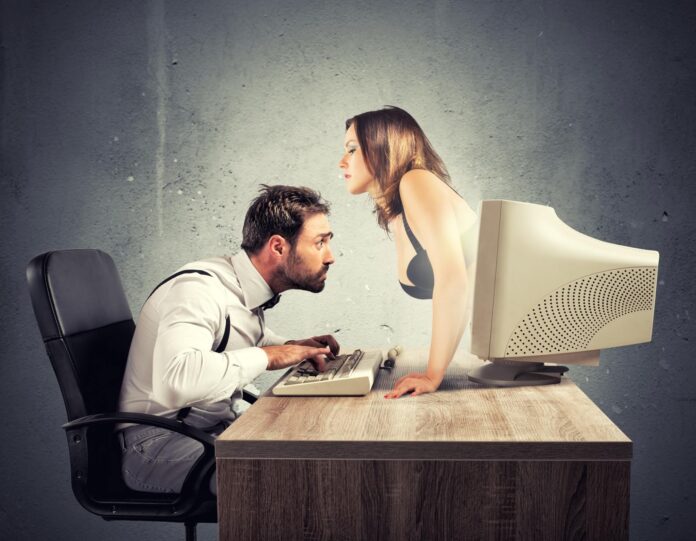 ‘Sextortion‘, a cyber crime which has been observed in the West, has officially arrived in India with a bang to ruin the life’s of gullible people.

The Cyber police in Hyderabad have received at least five complaints over the last two months where citizens, after visiting pornographic websites, found themselves being extorted with records of their online activities as leverage.

Cyber police officers said that sextortion is done using various methods. One modus operandi consists of chatting with an unsuspecting victim posing as a girl and getting them to send compromising pictures of themselves, which are then used for blackmail.

Another involves placing links on pornographic websites which, if clicked on, record the victim’s activities. A particularly serious form of sextortion also includes extorting sexual favours from the victim instead of money, officials said.

In Hyderabad, sextortion has been on the rise since the lockdown. Sridhar, an MBA graduate, died by suicide recently.

Sridhar, a 26-year-old MBA graduate died by suicide on 23 March. Shortly after, his sister, who does not want to be identified, got a ransom message on Facebook from one Rekha Sharma.

The sister provided Rekha Sharma with the mobile number of a relative. Someone who referred to himself as Tejas called soon. “He demanded Rs 21,000 as final settlement to delete a video. He spoke in Hindi mostly and his English wasn’t good. It sounded like he was from north India,” said the victim’s sister. Tejas reportedly revealed to the family that Rekha Sharma has three managers – Moin Khan, Robin Khan and Javed.

Rekha Sharma happened to be a fake handle created to lure men to perform sexual acts while on video call. Her handlers were men who emerge for blackmail once the acts are recorded.

Only the encounter with Tejas revealed to Stidhar family that he had taken his life to escape sextortion.

Sextortion refers to the practice of coercing someone to pose nude or perform sexual acts on camera, to later blackmail them to pay for the video footage or images. Sextortionists, like extortionists, threaten to make public the lewd video content.

“This is the trending modus operandi,” Cyber Crime officer told #KhabarLive, “With the profile of a lady, a gang targets a person, makes him strip during a video call, and screen records the activity.” The footage is then used for sextortion. Cases of sextortion have increased rapidly especially after the COVID-19 lockdown, he added.

According to police, apart from Facebook, cases of sextortion are rampant on online dating apps as well. In January this year, according to media reports, a 38-year-old former teacher was arrested for uploading her profile on matrimonial websites to “trap people”.

Sextortionists are also on the prowl on Zoom, the popular app now used by millions for online office meetings and for online education. Cyber experts say that calls on such apps are not encrypted, thus paving the way for hackers to easily enter these chats and record videos.

In Hyderabad, even minors have even been victims of sextortion. Recently, a minor was targeted after being befriended by someone on Facebook. Reports claim that the alleged perpetrator forced the child to send nude pictures of his parents. The matter was taken to the police, who registered a case of criminal intimidation and extortion. The police did not reveal details of the case’s progress.

“I was shocked when I realised that my brother had hanged himself,” said Sridhar sister, even now traumatised by his untimely demise, which now seems to be the result of an incautious interaction on Facebook. “When I took a look at my brother’s bank transactions, I noticed that on a single day he had made six transactions, which totalled Rs 36,000,” the sister said.

Hyderabad police investigation has now revealed that Sridhar fell victim to sextortion after chatting with a Facebook friend named Neha Sharma. He stripped at her behest during a video call, said police sources.

“How I wish my brother had exercised caution. How I wish he had spoken to us,” said the victim’s sister, mourning his loss.

The police have registered an FIR against five suspects. Police said that several other victims have also been coming forward to report cases. “A person is humiliated with nude pictures and sexually explicit content. The victim will most often resort to taking one’s own life than step into a police station to fight the case,” he said.

While police sources say that they have some leads in Sridhar’s case, the sister claims that the cops haven’t made any headway yet and that her calls to the police remain unanswered.

Hyderabad police have arrested two members of the gang that allegedly trapped Sridhar. A hunt is on for three other members, police sources said.

“With the rise in pornographic content, certain extortion gangs bluff a victim, and blackmail them, even without evidence,” said Vijayashankar, an expert in cyber laws.

Cyber cop said that most of these exchanges happen through e-mails. Certain reports suggest that some scammers claim to have hacked into the home security cameras of victims, without actually doing so.

A cybersecurity firm called Avast is also of the opinion that most sextortion e-mails end up being fake claims. This firm is believed to have blocked over half a million sextortion attack attempts in January, 2021 alone. According to Avast, most of these attacks targeted nearly 4,000 English-speaking users in India.

As per a research conducted by cybersecurity firm Sophos, India is among the top10 countries from where sextortion mails originate.