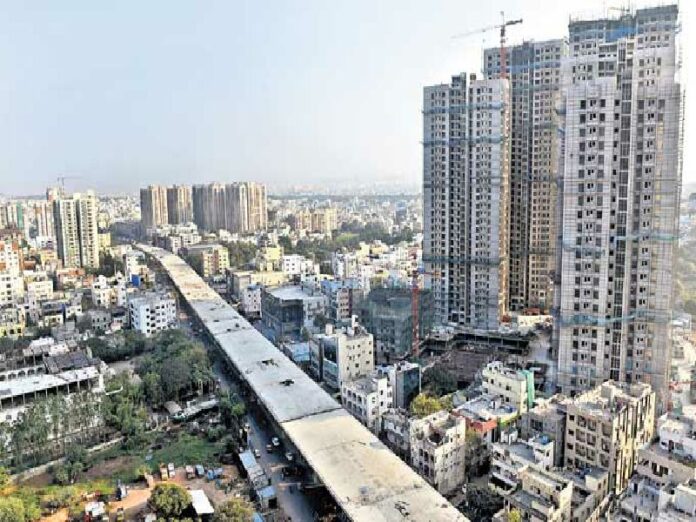 The long pending flyover work since last year due to pandemic resumes in Shaikpet area of Tolichowki in Hyderabad. The civicbody assures the completion before September as scheduled.

The Greater Hyderabad Municipal Corporation (GHMC) has taken steps to intensify the works on the Osmania University Colony flyover at Shaikpet in Tolichowki, which was taken up to ease traffic congestion on the stretch from Rethibowli to Gachibowli. The civic body is aiming to have the project completed and open it for vehicular movement by the month of September.

The stretch from Rethibowli to Gachibowli is also an Intermediate Ring Road and heavy traffic is witnessed on the stretch almost round-the-clock. This apart, the stretch forms an important connectivity from the core area to the bustling IT hubs in Hitec City and Financial District.

During the peak hours, bumper to bumper traffic is witnessed on the stretch and ends in throwing up traffic chaos, and resulting in motorists spending long time in reaching their destination apart from exhausting more fuel. Considering all these factors, the municipal corporation is constructing the six-lane flyover to ease traffic congestion on the stretch with an estimated cost of Rs 333.50 crore.

The two-way flyover will facilitate in crossing the Seven Tombs junction, Film Nagar junction, OU Colony junction and Whisper Valley junction and is planned to ensure smooth flow of traffic towards IT hubs.

Works are being taken up at brisk pace with an aim to complete the project by September-end this year, GHMC officials said. “The initial delay in acquisition of land and properties and other aspects were covered a bit during the lockdown by executing different works,” said the official.

ALSO READ:  Why Covaxin Controversy Deepens As Health Experts Say 'No' To Use?1

“During the lockdown, 20 foundations were taken up and completed utilising the traffic-free roads from March 22. Moreover, 17 pier caps were installed at very critical locations during the lockdown period,” the official added.