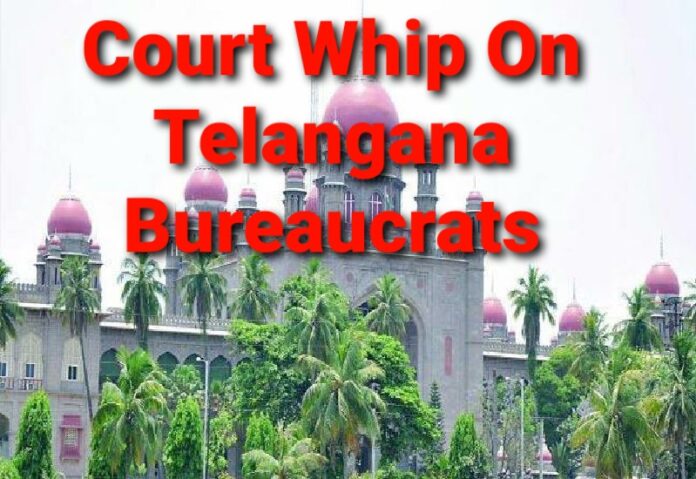 The Telangana High Court has cracked the whip on bureaucrats for contempt in land acquisition cases as it sentenced to jail five officials including two district collectors during the last one week for disobeying its orders.

By sentencing bureaucrats to jail, the High Court has sent strong message to officials involved in contempt cases that they can’t escape punishment for willful disobedience’ of court orders.

Two orders sentencing the contemnors have given hope to many petitioners who have approached the court against top officials for disobeying the court’s directions.

Several top officials in the state are facing contempt cases, especially pertaining to land acquisition for construction of irrigation projects

The jail term for the two officers, however, was suspended for six weeks.

The court, which convicted the government officials for unlawfully dispossessing some farmers in Siddipet district, directed Venkatarami Reddy and Jayachandra Reddy to pay Rs 25,000 and Rs 50,000 respectively to farmers towards legal costs.

The court also imposed a fine of Rs 2,000 on Rajanna Sircilla District Collector Krishna Bhaskar, who served as Collector of Siddipet between August 2018 and June 2019, for not following the orders.

Justice M.S. Ramachandra Rao also ordered that adverse entry be made in the service records of the two collectors.

The judge pronounced the orders on petitions by a group of farmers who alleged that they were forcibly dispossessed of their land for constructing Mallanna Sagar reservoir as part of the Kaleshwaram Lift Irrigation Project. The petitioners complained that the requirements of Land Acquisition Act were not met despite orders by the court.

In 2017, Telangana government issued notification to acquire land under Right to Fair Compensation, Rehabilitation and Resettlement Act-2013 for construction of the reservoir with a storage capacity of 50 TMC of water.

Nearly 15 persons of Vemulaghat and surrounding villages had filed a writ petition stating that the objections they had raised were not taken into consideration. They contended that the details of Mallannasagar project report in Telugu which they had sought were not furnished to them.

The High Court had directed the government to make available the information sought on or before July, 9, 2018. The petitioners later filed a contempt of court case alleging that the court directions were not complied with by the officials.

Justice M.S. Ramachandra Rao passed the order on a contempt petition filed by 11 landowners from Anantagiri village of Sircilla district, whose land was submerged by a reservoir of the Kaleshwaram project.

The officials disobeyed the earlier interim orders of the court to not carry out any construction work that could affect the petitioners’ land unless they were paid compensation. The court had also ordered that the compensation should be paid as per the rules of land acquisition and benefits under the rehabilitation and resettlement policy.

The petitioners filed contempt petitions after the construction work continued submerging their lands and they were not paid compensation. The convicted officials were also directed to pay Rs 10,000 as legal cost to each of the petitioners.

In another case, the High Court on Tuesday summoned IAS officer A. Sharath to be present before the court on March 17 to explain as to why he has failed to implement a court order on Gudimalkapur market when he was commissioner of marketing department.

A bench of Chief Justice Hima Kohli and Justice B. Vijaysen Reddy passed the orders on bureaucrat’s contempt appeal challenging the order of a single judge that had convicted him in a contempt case with Rs 5,000 penalty.

The bench expressed its unhappiness over the official disobeying the order of the single judge bench to address the grievances of members of the vegetable commission agents welfare association. #KhabarLive #hydnews