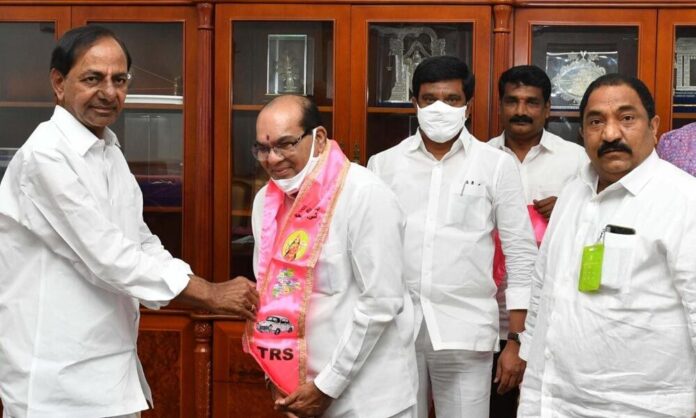 Earlier, there were two MLAs of Telugu Desam Party in Telangana Assembly including M Nageswara Rao from Ashwaraopet and Sandra Venkata Veeraiah from Sattupally Assembly constituency. While Sandra Venkata Veeraiah had already changed loyalties, Nageswara Rao remained in TDP stating that he had no intentions to leave the party. However, the Aswaraopeta MLA,on Wednesday resigned from the TDP.

ALSO READ:  Is Andhra Pradesh At The Edge Of 'Constitutional Crisis'?

Nageswara Rao met Legislative Affairs Minister Vemula Prashanth Reddy and expressed his willingness to join TRS. Later, he along with Veeraiah met Assembly Speaker Pocharam Srinivas Reddy at his residence and gave a letter stating that the TDLP was being merged into TRSLP. This has ended the Telugu Desam Party’s presence in the Telangana Assembly.

A bulletin would soon be issued by the Assembly authorities notifying the merger of TDLP with TRSLP. The Legislative Affairs Minister took both the MLAs to the Chief Minister K Chandrashekar Rao, who included the leaders by offering party ‘khandua.’

With this, the strength of TRS in the Assembly has gone up to 101. The party wise strength in the 119 members Telangana Assembly is TRS (101), AIMIM (07), Congress (06) and BJP (02). While one member is independent another seat is vacant. The vacant Nagarjunsagarwould bypoll on April 17. #KhabarLive #hydnews