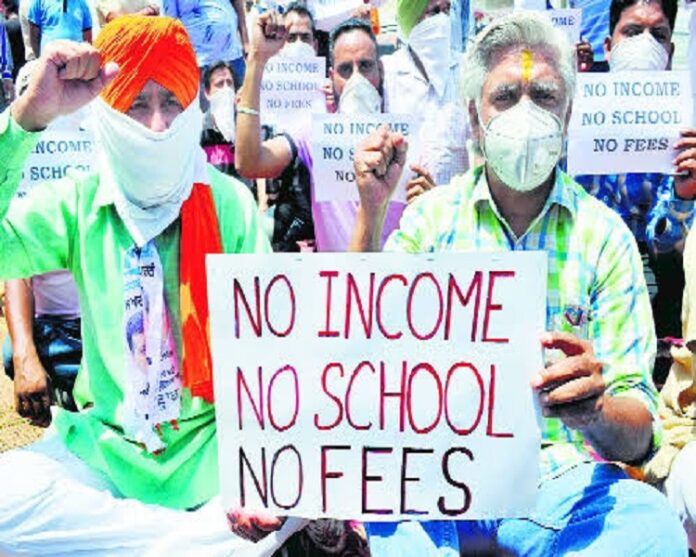 In Telangana, about 9,500 of the total 11,500 private schools are categorized as budget schools. These schools cater to about 33 lakh students. Almost 3500 schools already closed in this about a lakh of teachers lost jobs and upto 15 lakh students career gone in dark.

According to the Telangana Recognised Schools Management Association (TRSMA), about 3500 private budget schools are closed and about a lakh teachers from these schools have changed their professions to sustain their families.

While welcoming the Telangana government’s decision to reopen all educational institutions from September 1, managements of private budget schools in the state have sought monetary support in the form of unsecured loans to help them overcome the financial distress as a result of remaining shut for nearly 18 months.

“After the Telangana government’s announcement that students would be promoted to the next class without mandatory attendance and assessment, nearly 75 percent of students have stopped attending classes.

About 50 percent of these schools could not conduct online classes. Many of the students are unreachable. Many have started going to work along with their parents for daily wages. As per our date, 3500 private budget schools in Telangana have been shut down,” Madhusudhan Sadula, general secretary of TRSMA and national vice-president of National Independent Schools Alliance (NISA) told #KhabarLive.

Speaking to #KhabarLive, Dr. Kulbhushan Sharma, national president of NISA pointed out that the grim situation has led to many school owners across the country ending their lives by suicide. He said about 30 crore people associated with education and allied sectors have been affected nationwide due to the shutdown of schools.

30-year-old Pradeep who ran a budget school in Telangana’s Jagtial district and a young couple, Subramaniam and Rohini, who ran a school in Andhra Pradesh’s Koilkuntla had died by suicide recently unable to deal with the financial constraints. “These are not suicides. These are institutional murders due to policy failures. In today’s scenario, it is not easy to run a budget school and we don’t need any more deaths,” said Sharma, demanding support from the government.

“Schools have remained shut for long. Over a lakh teachers have found other professions, and students are not interested in education. It is an education emergency,” added Madhusudhan.

TRSMA state president Yadagiri Shekhar Rao appealed to parents to send their children to schools without any concerns. “We are ready to open schools, duly following all Covid protocols. It is our responsibility. But we want the government to support schools with an unsecured loan of Rs 10 lakh to Rs 25 lakh to stand on our feet,” he added.

According to TRSMA, these schools are mostly run from rented spaces. As they have been shut for 18 months without any operations, owners have not been able to pay rent, electricity charges, property taxes, and EMIs for loans availed for establishment and expansion.

The association has demanded the state government to extend the moratorium period for existing loans of all schools for one more year. Many school owners have availed loans from private financiers and are facing harassment as they are unable to repay them. “The Centre has now extended the support under the Credit Guarantee Fund Trust for Micro and Small Enterprises (CGTMSE) to traders too. This should be extended to schools too,” he said.

As the Telangana government is yet to issue guidelines for the reopening of private and public educational institutions, the managements have called for a comprehensive policy to allow operations of schools while containing the spread of Covid-19. NISA and TRSMA have sought an inquiry into the deaths of school owners and demanded an ex-gratia of Rs 50 lakh to the families of the deceased. #KhabarLive #hydnews