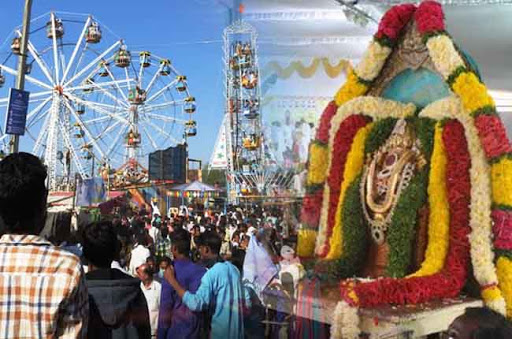 Nagoba Jatara is one of the most important Jataras of the Gond and Pardhan tribes of erstwhile Adilabad. The Jatara receives devotees from across Telangana and the adjoining States.

The chief deity of the Jatara – Nagoba (Sri Shek – Cobra) – is the supreme deity (Persa Pen) of the Gonds and Pardhans. The Buigota Khandan of Mesram Clan in particular celebrates the Jatara. 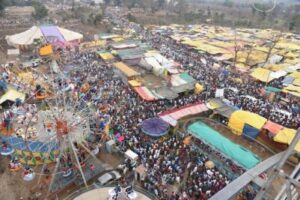 The Nagoba Jatara is an annual fair held at Keslapur of Indervelly Mandal, in Adilabad District. Keslapur is 20 km from the ITDA headquarters Utnoor and from Gudihathnoor on the National Highway No 44. The Jatara is held on Pushya Amavasya (new moon day in February).

The Jatara
Few elder members of the Mesram clan go barefoot to the river Godavari few days before the Jatara, bring holy water and keep it near the Banyan Tree in front of the Nagoba Temple.

Women folk of the Buigota Khandan of Mesram Clan prepare an earthen ‘lingam’ and later make mud balls out of it and arrange them in seven concentric circles one above the other. The mud balls are used to plaster the floor of the Sati shrine on the premises of the Nagoba Temple. The clan priest and village headman prepare seven lumps of mud and decorate them with vermillion paste to make the Sati.

ALSO READ:  Why The 'Reservation Battle' Between 'Adivasis And Lambadas' Can Spell Trouble For TRS In Elections? 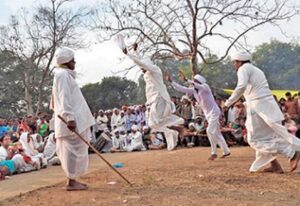 Bheting
New brides of the clan in white saris come in a procession and enter the Sati shrine and worship the seven miniature stones representing their seven divine ancestors. They are then led by older women to worship the Nagoba, after which they are recognised as full-fledged members of the clan entitled to participate in all socio-religious rituals and rites.

Then the Katoda – clan priest – washes the deity Nagoba with the holy waters of Godavari and worships with seven coconuts and other offerings. Thereafter, all tribals and non-tribals are allowed to have darshan of the deity. Some devotees also sacrifice fowls, goats, etc. at some distant place.

The procession of decorated carts from far-off places to Keslapur is a sight to behold during the Jatara. Hawkers sell many interesting local and exotic items.

Durbar
Professor Haimendorf, Advisor to the erstwhile Government of the Nizam’s Dominions, introduced in 1940s a tradition of Durbar in the afternoon after the darshan of the deity. The local tribal leaders by sitting on one side will put the local problems before the Ministers, MLAs, the District Collector, Project Officer, ITDA Utnoor and other officials sitting on the other side to address them then and there itself.

ALSO READ:  The Story Behind 'Greying Hair Obsession' In Women 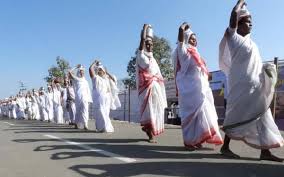 The Legend
Nagoba has a lengthy legend recited by Pardhan tribal bards in accompaniment of musical instruments for several days. The narration includes many adventures of tribal heroic men and women including long travels to bring rare things, carrying a ‘kalash’ of sacred water of Ganga, observing penance under banyan trees surrounded with anthills, etc. The heirs and predecessors of one Jejkal Dev are said to have passed on the sacred Kalash to their next generations. The Gonds and Pardhans still symbolically observe the legendary practice of worshipping the sacred Kalash kept on the branches of a banyan tree, travelling barefoot for several days to the river Ganga (i.e. Godavari) to fetch sacred water and so on.

The chieftain Jejkal Dev is said to have found the barren town Bowurmachua (present Keslapur) and converted it into a fertile land by constructing tanks for irrigation. The Archaeology Department has recorded a barren town near Keslapur. Even today, remains of the town and several temples can be found in a village located in between Utnoor and Keslapur.

Yadavas of Devagiri (Maharashtra) ruled the region for some time during the 12th century. The Gond chieftains took over and the Jathara has been celebrated uninterruptedly.

The temple seems to have been reconstructed during the Qutb Shahi period and renovated during the Asaf Jahi period. However, except ruins, no concrete structure was in existence some five decades ago, as per the account of Dr Kancharla Mohanrao, a Tribal Welfare Department officer. There was only a thatched hut as a shelter to the deity. Half-a-century ago a brick-cement temple was built.

Government Support
Now the temple is being renovated. The State Endowment Department is providing funds in addition to contributions from clans. The Government is arranging public utilities for devotees.

The State Tribal Welfare Department has been supporting the Nagoba Jatara with a budget. This year, though the annual fair is not being held in view of the pandemic, traditional worship will be continued by the clans for four days from February 11 to 14. #KhabarLive #hydnews