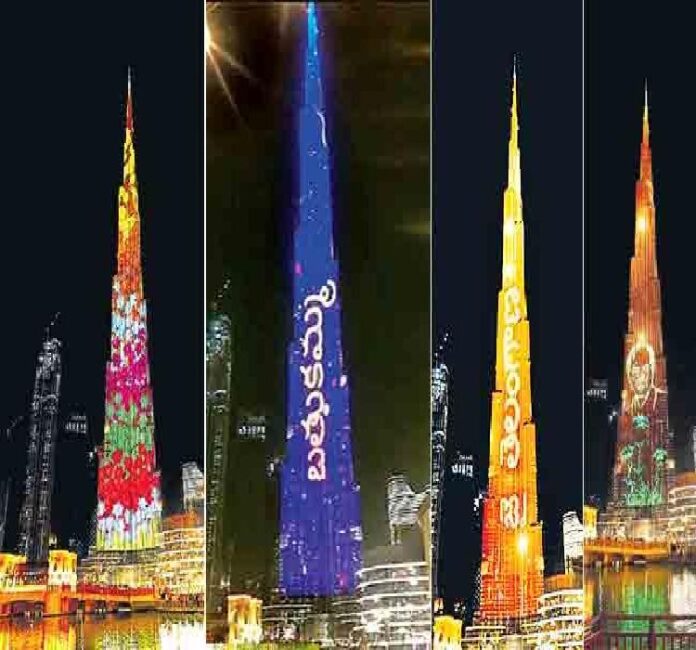 Telangana Chief Minister daughter Kalvakuntla Kavitha-led cultural organisation Telangana Jagruthi scripted history with the screening of Bathukamma at Burj Khalifa of Dubai. Many witnessed the live event with joy and fervor and the premises echoed with ‘Jai Telangana’ slogans.

World’s tallest building Burj Khalifa in Dubai on witnessed a unique show that celebrated Telanaga’s Bathukamma, a colorful floral festival celebrated by the women folk in the state.

ALSO READ:  Protest Against The Sudden Change in Exam Pattern In National Institute Of Tourism And Hotel Management At Hyderabad

Telangana Legislative Council member Kalvakuntla Kavitha who heads cultural organization Telangana Jagruthi and other leaders from the State were present at Burj Khalifa to witness the rare show.

Kavitha, a former MP and daughter of Telangana Chief Minister K. Chandrasekhar Rao, shared glimpses of the show with Netizens.

The show was live across various platforms around the globe. Telangana Jagruthi made arrangements to play the Bathukamma documentary on the big screen for invited delegates and separately for the local people.

The screening featured the map of India, map of Telangana, Chief Minister KCR, Bathukamma flowers, with specially composed song ‘Alipoola Vennela’ playing in the background highlighting the heritage of India and Telangana. The slogans of Jai Hind, Jai Telangana, and Jai KCR on the Burj screen echoed with tears of joy and pride among the viewers.

ALSO READ:  How A 'Dalit' Academic And Activist Became The Target Of A Vicious 'Online Campaign'?

Bathukamma, the symbol of Telangana culture and the State government’s official festival, was celebrated from October 6 to 14.

Ever since the formation of Telangana state in 2014, Bathukamma has been celebrated as the state festival.

Telangana Jagruthi, a cultural and literary organization that was formed during the statehood movement for Telangana in India, has been working to preserve and celebrate the cultural heritage of Telangana.

This year, the organization launched a Bathukamma Song Allipoola Vennela, which is already a superhit this festive season composed by music maestro A R Rahman, directed by ace Indian director Gautham Vasudev Menon and brought to life by a talented team of artists to add more to the festive season. #KhabarLive #hydnews