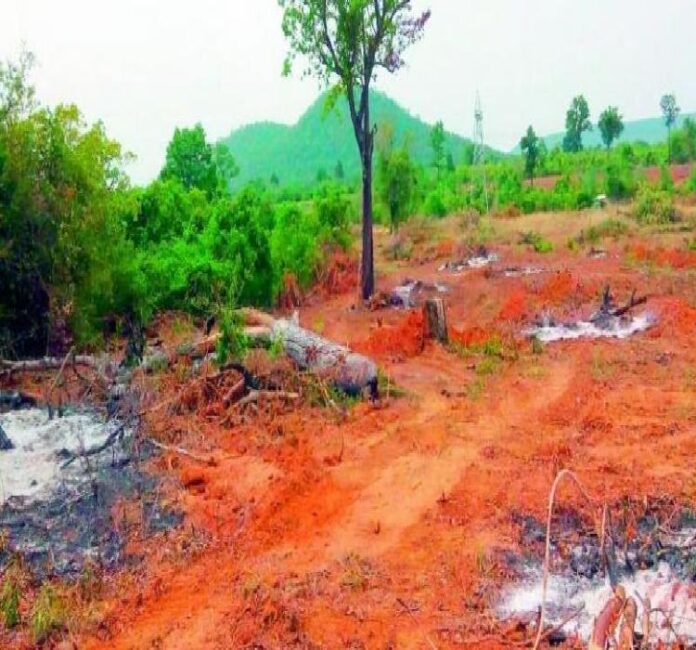 Though the Telangana state government has repeatedly said that it will address once and for all the issue of podu lands and provide ‘some kind of pattas’ to the claimants, it might not be as simple as it sounds. The tribal welfare department, had processed 96,676 claims and approved farming rights over 3.08 lakh acres of forest land in the state.

The forests in Telangana state are under siege, from thousands of fires chewing through hundreds of acres regularly, to illegal occupation, demands from cattle herders and sheep rearers to be allowed to graze their animals, and from people demanding pattas to a few lakh acres they have occupied on which they practice ‘podu’, or shifting, cultivation.

The issue of podu lands has been one of the most vexatious in the state which, over the past few years, has resulted in many run-ins between the forest department officials and staff and forest land occupants in several districts. Such incidents have sometimes ended up in department staff being beaten up by the people, and counter-allegations of people being attacked by the staff.

ALSO READ:  From A 'Hardcore Rebel' To A 'Servile Politician' - Telangana MLA 'Seetakka'

It is not that people filing claims seeking rights to continue farming in occupied forest lands have never been approved. Under the Scheduled Tribes and Other Traditional Forest Dwellers (Recognition of Forest Rights) Act, 2006, the tribal welfare department, the nodal agency for identifying eligible applicants, had processed 96,676 claims and approved farming rights over 3.08 lakh acres of forest land in the state.

These claims were from the 2.04 lakh-odd claims filed under the Act seeking hereditary rights to be allowed to cultivate occupied forest lands that cover 6.90 lakh acres. As on date, there are 15,558 claims covering 53,565 acres spread over Adilabad, Komaram Bheem-Asifabad, Bhadradri Kothagudem, and Nagarkurnool district are pending inquiry.

With only some 15,000-odd claims pending, one would not expect a large hue and cry as the state goes about its job in examining these claims. But the real problem lies in the rejected claims. None of the tribals, who filed the rejected 91,942 claims have been informed that their applications are no longer valid. This has resulted in tens of thousands of tribals, with saved pieces of paper of acknowledgements of claims filed, hoping that their claims may still be honoured, while this is not the case.

As per Supreme Court directions, every tribal whose claim has been rejected needs to receive what are called ‘speaking orders’, the decision of a rejected claim that is also read out to ensure that the decision is properly understood by the claimant.

Though the state government has repeatedly said that it will address once and for all the issue of podu lands and provide ‘some kind of pattas’ to the claimants, it might not be as simple as it sounds. If the 91,942 claims, rejected by the tribal welfare department have to be honoured, then the forest land needs to be dereserved, a next to impossible task as the state will have to provide in return, 3.27 lakh acres of afforestation-capable land to the forest department as per Central rules. The other option would mean that the government will need to find this whopping amount of arable land outside of forest areas for distribution among the rejected claimants.

Meanwhile, with strict instructions from the government to the forest department not to interfere with podu cultivation, it is learnt from the field that in several parts of the state, more forest land acreage is being cleared in the hopes that the government will give pattas to the land.

Incidentally, though rights to use the already cleared forest land by those whose claims were officially approved are in force, the fact remains that pattas cannot be given in forest land to anyone. #KhabarLive #hydnews