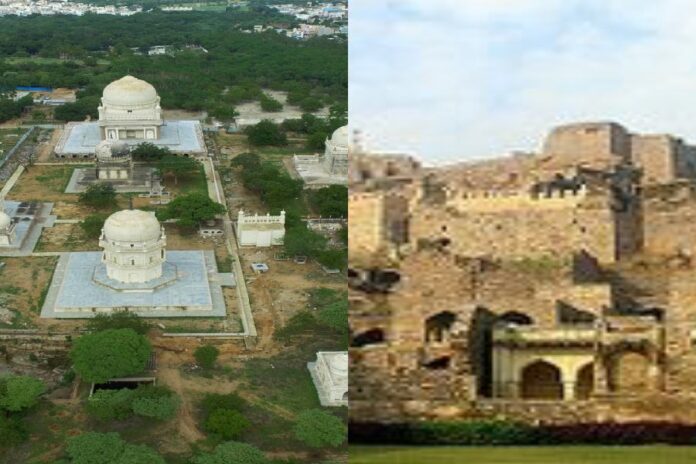 During the restoration work at the Qutub Shahi Tombs by the Aga Khan Trust for Culture has led to the surprise discovery of the signs of an old gate within the complex from where the burial processions from the Golconda Fort entered the tombs complex for the final ceremony of the departed royal. On this British poetess wrote a blind ode poem.

Initial excavation on the southern side of Sultan Ibrahim Qutub Shah tomb has thrown up a pathway with remnants of walls on either side leading to the compound wall of the complex where the gate might have existed in the past. Enquiries with locals revealed that the gate was called Murda Darwaza or Murda Gate. There are signs of a well and an area nearby where the bodies were bathed. The gate was located in alignment with the southern side of Ibrahim Qutb Shah tomb.

As the author describe during a chat with #KhabarLive, on the situation of royal graveyard at ‘Qutub Shahi Tombs’ or ‘Seven Tombs’ – “On a pleasant winter morning in early December last year, I was invited to visit the Qutb Shahi Tombs by the authorities of the Aga Khan Trust for Culture to see the ongoing restoration process at the site in the company of friends and likeminded persons. It was a special occasion for me for it was the first time I could see the Murda Darwaza (Door for the dead) that connected the Golconda fort and the Qutb Shahi necropolis after the removal of several layers of mounds of earth. This arched doorway, although not yet opened, is supposed to have been the channel to carry the dead bodies of the royalty and their close associates from their imperial chambers in the fort for the customary funeral bath and burial at the tombs complex.”

Letitia Elizabeth Landon would have been a happy person to know about the sighting of this doorway. A young English poet, L.E.L., as she was popularly known lived briefly from 1802 to 1838. Having penned the poem titled The Tombs of the Kings of Golconda, L.E.L. is not a well-known figure in literary circles as she preferred to remain anonymous in many of her works.

A highly unusual factor in her poem is that she wrote it without physically visiting the site ever. Obviously, she was mighty impressed with what she had read about the Tombs. It appears that at first she drew a picture of the place in her mind and then transported it to the paper. This may be because even till date there is no necropolis in the world where almost all the kings of a dynasty are buried.

The Tombs of the Kings of Golconda forms a part of the collection of The Zenana and minor poems of L.E.L. first published in 1839 and presently rests in the famed archival collection of the Oxford University, United Kingdom. Fisher in his Drawing Room Scrap Book in 1838, Robert Sears in his The Wonders of the World—Nature, Art and Mind in 1856, and Henry Longfellow in his Poems of Places: Asia in 1878 reproduced L.E.L’s ode on Golconda.

With an introduction by Emma Roberts, the collection comprises little books that are valuable mines of literary treasure written on various faraway lands. L.E.L. as Emma Roberts says, “not only read, but thoroughly understood, and entered into the merits of every book that came out.” …….. “The history and literature of all ages and all countries were familiar to L.E.L; nor did she acquire any portion of her knowledge in a superficial manner; the extent of her learning, and the depth of her research, manifesting themselves in publications which do not bear her name; her claim to them being only known to friends, who, like myself, had access to her desk, and with whom she knew the secret might be safely trusted.” 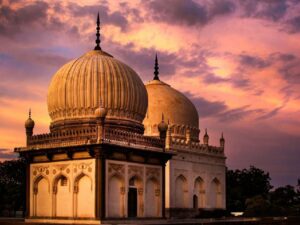 Poem: The Tombs of the Kings of Golconda
Morning is round the shining palace,
Mirrored on the tide,
Where the lily lifts her chalice,
With its gold inside.
Like an offering from the waves.

Early wakened from their slumbers,
Stand the glittering ranks;
Who is there shall count the numbers,
On the river’s banks?
Forth the household pours the slaves,
Of the kings of fair Golconda,
Of Golconda’s ancient kings.

Wherefore to the crimson morning,
Are the banners spread,
Daybreak’s early colours scorning,
With a livelier red.
Pearls are wrought on each silk fold.

Summer flowers are flung to wither,
On the common way,
Is some royal bride brought hither?
With this festival array,
To the city’s mountain-hold,
Of the kings of old Golconda,
Of Golconda’s ancient kings?

From the gates the slow procession,
Troops and nobles come,
This hour takes the king possession,
Or an ancient home —
One he never leaves again.

Musk and sandal-wood and amber
Fling around their breath,
They will fill the murky chamber,
Where the bride is Death.
Where the worm hath sole domain,
O’er the kings of old Golconda,
O’er Golconda’s ancient kings.

Now the monarch must surrender,
All his golden state,
Yet the mockeries of splendour,
On the pageant wait,
That attends him to the tomb.

Music on the air is swelling,
‘Tis the funeral song,
As to his ancestral dwelling,
Is he borne along.
They must share life’s common doom,
The kings of fair Golconda,
Golconda’s ancient kings.

For another is their glory,
And their state, and gold,
They are a forgotten story,
Faint and feebly told —
Breaking not the still repose,
Of the kings of fair Golconda,
Of Golconda’s ancient kings.

Glorious is their place of sleeping,
Gold with azure wrought,
And embroidered silk is sweeping,
Silk from Persia brought,
Round the carved marble walls.

Not the less the night owl’s pinion,
Stirs the dusky air,
Not the less is the dominion,
Of the earth-worm there.
Not less deep the shadow falls,
O’er the kings of fair Golconda,
O’er Golconda’s ancient kings.

Not on such vain aids relying,
Can the human heart,
Triumph over the dead and dying,
It must know its part,
In the glorious hopes that wait,
The bright openings of the portal,
Far beyond the sky —
Faith, whose promise is immortal,
Life that cannot die.

These, and stronger than the state
Of the kings of fair Golconda,
Or Golconda’s ancient kings.

It appears as if L.E.L., was closer to the realities of the Qutb Shahis than many other writers.  She is separated by a time gap of a century and a half. Her knowledge about Golconda was comprehensive and impressive enough to be translated into this poetic composition. After all, Golconda’s famed wealth, fertility of land, thriving trade and commerce, celebrated diamond mines and the strategic location of the kingdom giving it a seaborne access made the Qutb Shahis known in different parts of the world. #KhabarLive #hydnews 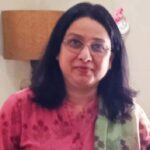