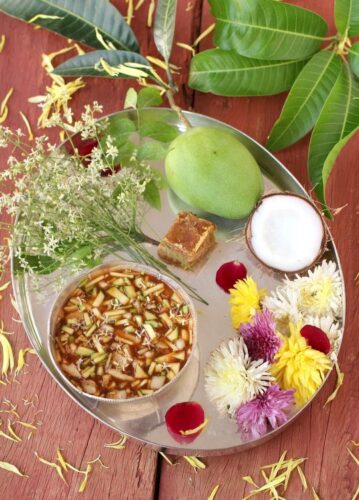 The Ugadi pachadi is made of neem flowers, raw mango, jaggery, pepper powder, coconut and salt. There are slight variations of making this. Some of the other ingredients that are used for making this tastier are fried gram (putnalu pappu), cashews, raisins and sliced banana.

‘Ugadi pachadi’ is a popular dish consumed in every Telugu household on Ugadi, or the Telugu New Year’s Day, which is just three days away. Prepared using raw mango, tamarind and jaggery, the recipe’s chief ingredient is quite special — flowers from the neem tree. Unfortunately, for many Telugus in Hyderabad, finding a neem teem, that too one bearing flowers, is an arduous task.

Until a few years ago, neem — an evergreen tree species known for its medicinal properties — was available all over the city. But their numbers have consistently come down. Case in point is the Nimboli adda near Kachiguda in the city. The locality, which supposedly got its name for being home to many neem trees, does not have more than a couple of young neem trees now. Flower-bearing trees are a rarity here.

One reason behind the decline in the number of neem trees, apart from deforestation, is the infestation of a parasite creeper called loranthus or Honey Suckle Mistletoe, as per officials of the Greater Hyderabad Municipal Corporation (GHMC) dealing with urban biodiversity. The parasitic creeper anchors itself onto the branches of neem trees and sucks water and nutrients directly from them, weakening the host.

To protect the neem tree, control measures against the parasite are imperative. The creepers must be removed in the early stages of infestation, or they should be sawn off from the branches of its host.GHMC officials admit that the dwindling number of neem trees in the city is a cause of concern and they, along with the HMDA, are taking up plantation of neem saplings as part of the Telangana Ku Haritha Haram programme. #KhabarLive #hydnews