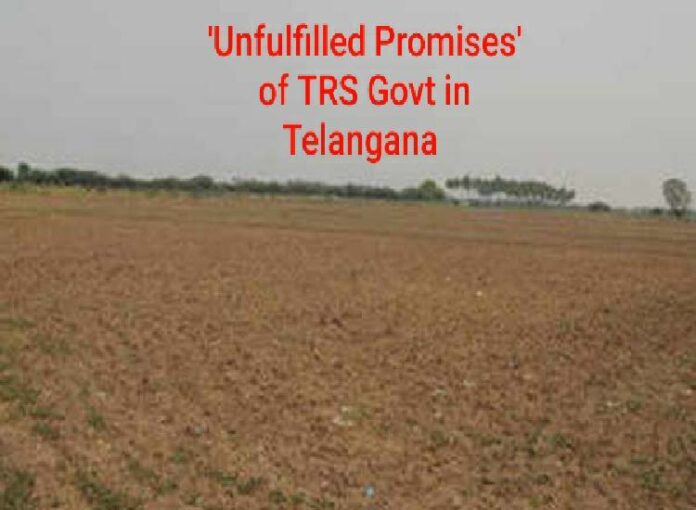 Some unfulfilled promises made by the TRS in its election manifesto have come to haunt the party at a time when the political climate in the State is heating up with a series of elections– the Graduate MLCs polls, the Nagarjunasagar Assembly bypoll and Warangal and Khammam Municipal Corporations–which would be conducted soon.

Distribution of three acres to landless poor SC families was one such promise made by the party in its first election manifesto in 2014 soon after the formation of the State and unemployment dole for jobless youth in the 2018 elections.

This gave rise to speculation if the distribution of land scheme will be given a silent burial as it ran into hurdles after about 12,000 acres were distributed between 2014 and 2016 to about 6,000 odd landless families out of the then estimated 3.3 lakh beneficiaries.

The government was prepared to buy cultivable land and distribute it, but the steep rise in the cost of agricultural land made the implementation of the scheme untenable. Thanks to the thrust given to irrigation projects, schemes like Mission Kakatiya saw a revival of thousands of tanks, good rains, the cost of agricultural lands zoomed. More so after reorganisation of new districts with better connectivity to the district headquarters. Not many were willing to part with lands after ‘Rythu Bandhu’ scheme was introduced.  “Now nothing less than Rs 20 lakh an acre is available even in remote villages, which were in the range of  Rs 3 lakh to Rs.5 lakh earlier,” sources said.

But it is wrong to assume that the government is replacing the distribution of land scheme. It can still allot assigned and alienated land, sources say. Yet the recent announcement by Chief Minister K Chandrasekhar Rao about “CM’s SC Empowerment Scheme’ to be personally monitored by him in the public meeting at Halia in Nalgonda district  is apparently to assuage the SCs and address the aspirations of this segment.

Apparently, there is a perception that the bouquet of welfare schemes being implemented by the State government was for all the communities. “There should be a scheme exclusively to generate livelihood and employment opportunities for the downtrodden SCs, who comprise about 16 per cent of the State population,” SC leaders believed to have represented.

According to government sources, the Chief Minister has indicated that Rs 1,000 crore fund will be allocated in the coming budget for the new SC Empowerment scheme. “The broad contours of the scheme and modalities are being worked out. There are various proposals under consideration providing mechanical agricultural equipment to youth groups by tying up with the agriculture department, identify the skill sets relevant for the future among the educated SC youth and tie-up with high-end training partners. For those with a high-school education, training may be arranged under the aegis of Industrial Training Institutes”, sources said.

With several SC youth coming out of engineering and other professional courses, the government is looking at assisting eligible youth to work on Startups in T-Hub.  In the rural areas, usage of agricultural machinery has increased manifold.

”There is a growing demand for skilled youth to repair and maintain this agri equipment and tools. The demand for skilled agricultural workers came into focus when thousands of migrant workers from Bihar, Jharkhand, Uttar Pradesh, went back to their States during the lockdown period imposed after the breakout of the Covid-19 pandemic. This is another area of livelihood generation,” sources added. #KhabarLive #hydnews