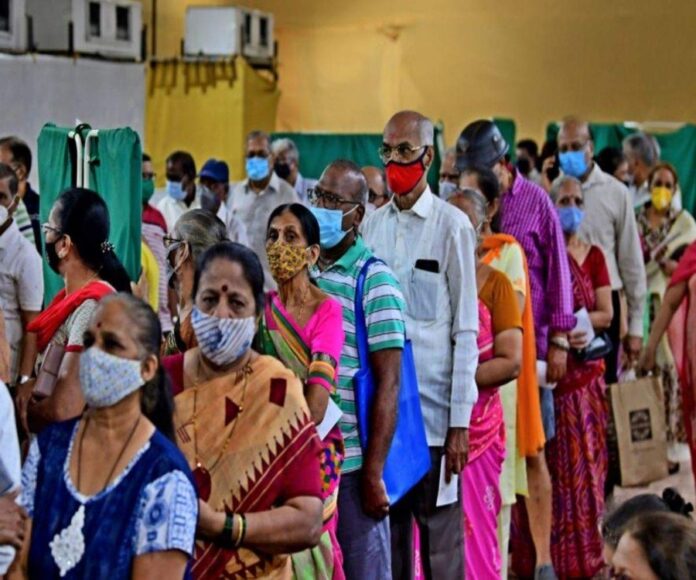 The desperately panicked Telugu people People waiting anxiously for their turn to get a vaccine for Covid -19 as early as possible. They literally have nothing else on their agenda for the days ahead.

As per experts, there are variations in the time gap required to administer the doses with regard to the two types of vaccines that are presently available all over the country: Covaxin and Covishield.  As for the former, the second dose should be administered to a particular person immediately on completion of one month time period.

The latter should be repeated after 6-8 weeks’ time. Otherwise, the vaccination would be in vain.  Those who have taken Covishield have some kind of relief as there is still time to get the vaccine and they hope to get their second dose in time.

Primary health centres and government hospitals are crowded by those seeking vaccine. It is a tough time even for the police to control the swelling crowds at the vaccine centres. There are fears that people at these centres may also be asymptomatic carriers of the virus.

ALSO READ:  Now, Ladies & Gentlemen, Presenting, Our Own - The ‘Made In India’ Bitcoin 'Lakshmi'

Acquiring vaccines to meet the requirement seems to be an uphill task for the authorities in both states. The Andhra Pradesh government is desperately looking for 10 lakh vaccines per day. There is strong belief among restive people that the authorities are not giving the correct picture relating to Covid-19 deaths. They point to the piles of bodies at graveyards!  Recently in Gujarat, 230 ads relating to local obituaries had to be carried in 6 pages in a newspaper on a single day. This happened on the day when the state government claimed there were only 25 deaths.

Prime Minister Narendra Modi was criticized by Jharkhand Chief Minister Hemanth Soren after Modi’s virtual meeting with Chief Ministers of various states, including Soren. Springing a surprise in political circles, Andhra Pradesh Chief Minister Y.S. Jaganmohan Reddy batted for Modi, and advised his Jharkhand counterpart that it was time for supporting the PM, keeping aside political differences. Surprisingly, none of the other non- BJP Chief Ministers in the country reacted on Hemant’s comments on Modi and none of them came forward in support of Modi. Some say Jagan sought to send positive signals to Modi.

Others ask: Is Jagan cautiously stepping forward on his political journey in future?  He has already set a goal for himself to retain power in 2024. For achieving that goal, he has to see that Naidu goes to polls alone in 2024. Splitting anti-government vote will be the motto for Jagan, rather than joining hands with Modi. Jagan has already invited his poll strategist Prasanth Kishor to work for him in 2024 also. He described Prasanth, while introducing him to party cadre in a meet held at Guntur, as “the person who would steer them(YSRCP) to power”.

It may be mentioned here that Kishor, who worked for the resounding victory of Mamata Banerjee of TMC in West Bengal, later announced that he would be distancing himself from such work. Nobody knows whether he has other plans for YSRCP.

There is strong criticism from Jagan’s political detractors that he deliberately came forward in support of Modi in the name of fight against Covid-19 considering his delicate position in the DA cases filed against him by CBI & ED. The rank and file of YSRCP is praying the Almighty for ‘favourable situation’ in courts in the event of any move for cancellation of his bail.

ALSO READ:  Beyond The Republic Day Parade: Looking For The 'Lost Ideals' Of The Nation

All political strategies can be kept aside for a while in the interests of people who are crying for attention from the governments.  If Jagan’s designs to impress Modi really work, he would get sufficient stocks of vaccines for Covid -19.  Noticeably, some states like Maharashtra, whose government is at loggerheads with Modi, are getting more stocks of vaccines than states like AP.

Amidst all this, it is heart-rending to note that ambulances carrying  Covid -19 patients from AP are not being allowed to reach Hyderabad by the Telangana police ostensibly due to non-availability of beds in hospitals there. VIPs and rich people from AP are free to go to Hyderabad for Covid- 19 treatment, whereas middle-class and poor people are badly treated at the borders.

At the end of the day, people of AP have a right to use the health infrastructure available at Hyderabad, at least considering that Hyderabad is the joint capital for both states of TS&AP for 10 years as per the provisions of AP Reorganisation Act -2014.

The ugly incidents on AP-TS border areas suggest that the status of Hyderabad as a joint capital is just on paper! #KhabarLive #hydnews