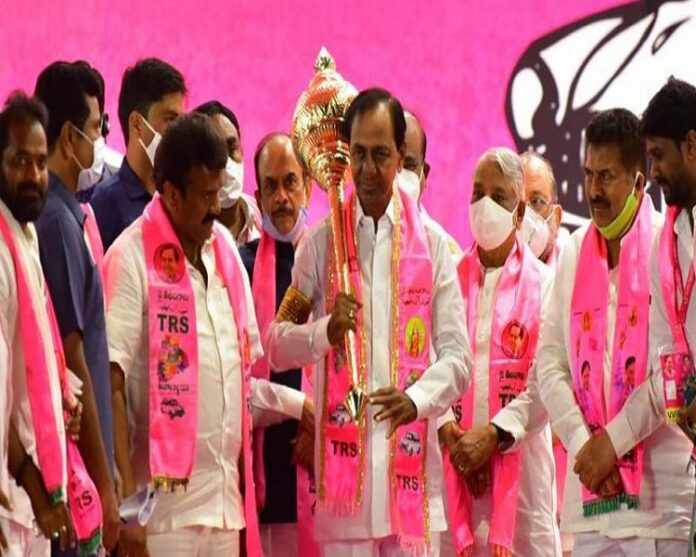 Going by the size of the entourage and the ongoing churn in the opposition camp at the national level, it appears that Telangana Rashtra Samithi (TRS) president and Chief Minister K Chandrasekhar Rao, during his visit to Delhi on 2nd September, may tie up the loose ends of his Federal Front formation.Officially speaking, KCR is going to Delhi to lay the foundation stone for the construction of TRS office building in Delhi. The Centre had allotted 1,200 sq yards of land for TRS office at Vasanth Vihar in Delhi.

In the recent TRS state committee meeting, the party leadership had decided to go ahead with the construction of an impressive party office in Delhi. KCR will lay the foundation stone in the presence of TRS MLAs, MLCs, MPs and members of the State Executive Committee. According to CMO, the Chief Minister will leave for Delhi on 1st September and return to Hyderabad on 3rd September.

At the national level, former Union minister and Nationalist Congress Party chief Sharad Pawar and West Bengal Chief Minister Mamata Banerjee have initiated steps to unite ‘anti -BJP forces’ to fight with BJP in the next Lok Sabha elections. KCR perhaps thinks that the political atmosphere in the country is presently in favour of those whom he had previously  envisaged as part of his Federal Front: ‘anti BJP’ and ‘anti Congress’ forces. The image of BJP, notwithstanding the pull of Prime Minister Narendra Modi, is fading. At the same time, the Congress, despite being a pan-India party, is not in a position to regain its lost ground by taking advantage of the present political situation.

KCR is of the considered view that time is ripe to meet some political leaders at the national level who are against BJP and Congress on this occasion. KCR is also thinking of inviting some leaders to the function, but the problem is that the Delhi government has been strictly implementing Covid protocol with regard to any functions. Since it is not possible for KCR to gather all the leaders, he is also considering separate meetings with some of them to discuss the political agenda.

Sharad Pawar and Mamata Banerjee are in favour of the Congress party and want to form a front with anti-BJP parties, including Congress. But they don’t want this front to be headed by Sonia Gandhi. KCR wants his Federal Front to comprise forces that are against BJP and Congress.

As for TS, TRS cannot join hands with the Congress because the grand old party is the main opposition in the state. ‘Anti-BJP’ parties like DMK, Janata Dal (Secular) of HD Deve Gowda, RJD of Tejaswi Yadav (Bihar) are also thinking that without the Congress it would not be possible to form a front at the national level against BJP.  Those parties have no problem with the Congress in their state-level politics, unlike the TRS in Telangana. Even Communist parties are in favour of having Congress in any front that may be formed ultimately to fight the BJP.

Against this background, it remains to be seen which political leaders KCR would invite and how he would convince them to join his Federal Front at the national level. In fact, KCR has already discussed this issue with Mamata Banerjee, MK Stalin, Deve Gowda, Navin Patnaik, Hemanth Soren and others in the past.  They all are in favour of the Federal Front, though not minus Congress party.  In any case, KCR wants to be active in national politics ahead of the next Lok Sabha elections. #KhabarLive #hydnews