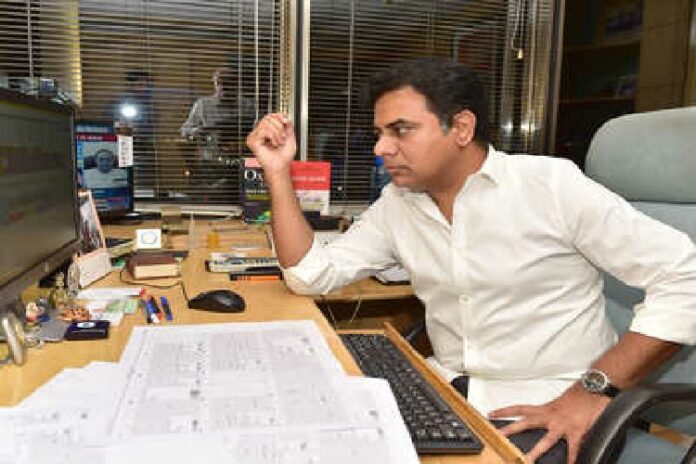 The game plan of the opposition for the next assembly polls, particularly the Bharatiya Janata Party, drawn over the past several months, was finalised keeping K. Chandrasekhar Rao as the prime target, which will go awry if KTR takes charge.

Amidst the growing clamour in the Telangana Rashtra Samiti and now seemingly inevitable rise of KCR’s son and minister K.T. Rama Rao as next Chief Minister, the Opposition parties, in particular, the challenger BJP seems to be ill at ease over any change of guard in the helm of state affairs.

The game plan of the opposition for the next assembly polls, particularly the Bharatiya Janata Party, drawn over the past several months, was finalised keeping K. Chandrasekhar Rao as the prime target, which will go awry if KTR takes charge.

For once, he may prove to be a contrasting kind of administrator to his father and current CM on several criteria. In fact, as CMs, they could prove to be as different chalk and cheese, which will push the BJP back to the drawing board.

For starters, the suave KTR, brimming with youthful dynamism, is expected to completely transform the image of the TRS government, which will make moot the repeated opposition accusations till now, and force a change in narrative.

“KTR will be ubiquitously present where the action is. This will render irrelevant the big charge of the opposition that KCR was restricting himself to either Pragati Bhavan, CM’s official residence or his farmhouse,” a senior TRS leader said, who is in the forefront of “make KTR CM” campaign.

Much to the surprise of his own partymen, state BJP president Bandi Sanjay has been repeatedly professing imminent doom for the TRS government. According to Bandi, the TRS government would fall rather quickly after KTR’s coronation.

“Bandi Sanjay should have instead tried to project a public narrative that change of guard in the TRS is immaterial to the BJP’s fortune, because it is set to bring down political stalwart KCR itself, so how would KTR matter?” a one of prominent BJP leader argued.

The TRS camp, for its part, is partly elated and partly confused about the revival of talk of KCR stepping down to facilitate his son’s elevation. The current political scuttlebutt amongst several senior leaders is that a change could happen anytime after the completion of KCR’s dream project and legacy, Yadadri, the creation of a temple city at Yadagirigutta.

TRS leaders are upbeat because KTR has already built a brand for himself, particularly among urban voters, and will undoubtedly tour the state extensively to connect with rural masses soon after his elevation.

“Ram anna is extremely articulate and multi-lingual. He can charm a variety of audiences with his macaronic capabilities, and can act as a bridge between India and Bharat, or Hyderabad and rest of Telangana,” said an MLA, adding that KTR was expected to be more accessible and rejuvenate the party morale and fighting spirit.

TRS party leaders also do not see any cause célèbre or anticipate any trouble or rebellion from grassroots leader and minister T. Harish Rao during this transition for a plethora of political reasons.

“What will he get in the BJP that he has not received in the TRS? He would stick to TRS and continue to work for the party and government, unless an attempt was made to marginalise him completely, which won’t be the case,” he said.

“Contrary to the perception of the opposition, Ram anna and Harish anna enjoy a good working relationship,” the MLA added.

Meanwhile, the BJP is hoping that KTR does not become the Chief Minister also because he can largely ward-off the anti-incumbency and seek a renewed mandate on the narrative that he needs a little more than three years to create a Bangaru Telangana. #KhabarLive #hydnews