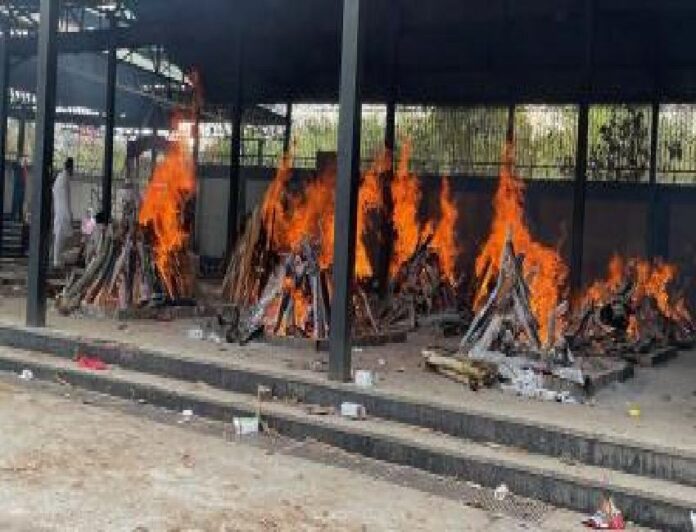 Despite government assurances and task force to handle the post death services, the mortality makes crematoriums a non-stop working machine. No proper facilities provided at many crematoriums like, wood, manpower and conveyance. Hence, the delay in cremation process  with heavy bodies arriving at crematoriums.

In many cases, even when a person died from Covid, the families are not revealing this and claim it was a natural death.

Smoke from half a dozen smouldering funeral pyres hangs over the crematorium in wisps and in columns, slowly enveloping the entire area. Even the walls of the rooms where bodies are ritually washed before cremation are not spared from the smoke from tonnes of wood and bodies consigned to the flames every day.

A man stacking the wooden steps, wiping the sweat from his face, asks the crematorium in-charge at Panjagutta: “All the platforms require cleaning before new bodies are placed and the fire lit. Where do we place a body that has just arrived? We already have six pyres burning.”

The man points to the embers giving out wispy smoke signals from the pyres lined up in front of the platforms.

Jagan, who manages the crematorium, responds by saying, “We have to find a place. Look where you can build one and that is where the body will have to be burnt.”

Jagan says the past two days gave a break from the hectic work at the crematorium over the past few weeks. But the remains from the last set of bodies burnt are yet to be cleared. “Families will have to come and collect the ashes before we do the cleaning.”

“Normally, we get about three or four bodies a day, but there have been days when we have had double that number,” he says.

Elsewhere, the Moramgadda Hindu Smashanavatika, as at Panjagutta, is a firewood- only cremation facility. All its six cremation blocks are full, with six to eight bodies being cremated each day.

Akash, one of the employees, says: “We have been asking people to take the bodies somewhere else because we have no space. All pyres are full for most part. We are helpless. There are also times when we have shortage of firewood, which delays cremations by four to six hours.”

The Bansilalpet crematorium is much busier. It handles 10 or 12 bodies a day. “We are helpless and tell the families to go and try elsewhere,” says its handlers.

At the Daira Hazrat Meer Mohammed Momin Qibla Astrabadi, also known as Meer Momin Sabh Daira — a Shia graveyard at Sultan Shahi, Mogulpura — it has been a very busy month from around April 13. The graveyard’s joint secretary Syed Hameed Hussain Jaffery says, “From April 13, there have been close to 200 burials here so far. The workers have been at it round-the-clock, even burying bodies till around 2am after the ritual bath and prayers.”

“We have 20 of our staff deployed for digging the graves and some 30 persons including five women for bathing the bodies. All of them are working voluntarily, understanding how tough it is for families losing their loved ones in this pandemic.”

Jaffery adds: “The same situation exists in other graveyards too. Fewer people are accompanying the bodies in these times. In many cases, even when a person died from Covid, the families are not revealing this and claim it was a natural death. This has happened at the Daira here. Some of those helping with the burials have been infected with the disease as a result.”

For Covid19, its victims cut across religions and all classes of the society. At the Bhoiguda Christian graveyard, around 10 bodies arrive daily. At the Narayanaguda cemetery, there is a regular arrival of casket-bearing bodies. Families of Catholic and Protestant denominations are using the cemetery.

Stated Jakarigari Shanti Kumar, a mason at the cemetery, “Earlier, it used to be one or two, or at the most some three bodies a day. Now we get six to eight. For the ones who pass away from Covid, their burials are taking place at Dundigal, Balapur and Ghatkesar.”

Senior mason, Matheri Raju, says: “The cause of death is being misrepresented by some families. They manage to get certificates from some doctors saying the person died of natural causes. Burial is allowed here only if the deceased did not die of Covid. But on account of people who lie about the cause, there is constant fear among us of catching the disease.” #KhabarLive #hydnews