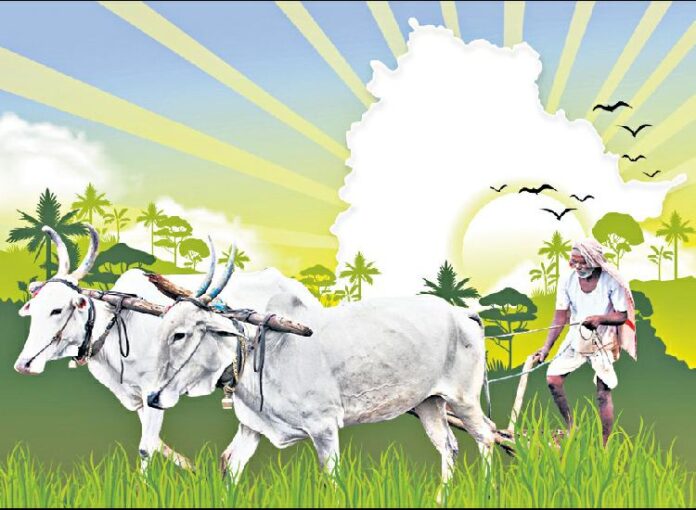 Debt, crop failure and low yield are problems that many farmers face in the Telangana state. The new farm laws will only make their situation worse, many believe, but KCR government is in full support to this law. #KhabarLive delves the main untold reasons for supporting Modi’s farm laws.

The farmers who are protesting in Delhi are not alone; they are joined by their counterparts across the country. In Telangana, farmers held over 25 protests across the state against the Centre’s farm laws on Republic Day, including a 1,000-vehicle strong parade in Hyderabad. Rural anger is focused on the Telangana government’s recent decision to close village-level paddy procurement centres across the state, a move that is in line with the farm laws.

Earlier, the ruling Telangana Rashtra Samiti (TRS) had opposed the farm laws and even participated in the nation-wide Bharat Bandh in December 2020. This policy reversal, according to the government, is due to losses caused by procurement and also because the ‘government is not a rice miller or a dal miller.’ Significantly, the government’s U-turn came soon after the BJP made major electoral gains in Hyderabad’s local body polls at the cost of the TRS.

The government’s decision adds to the rural distress in Telangana, as evident from the statements of families that have been affected by farmer suicides. At a distance of about 110 km from Hyderabad, the Siddipet district contains four assembly constituencies. The chief minister and the finance minister of the state were elected from this district. Coincidentally, the BJP also made inroads into the district recently after winning a fiercely-fought assembly by-election.

Schemes like the income support Rythu Bandhu – the inspiration for the PM KISAN scheme – served to improve the government’s image, especially ahead of the 2018 assembly elections. But in reality, even those farmers who received money under the scheme have also died by suicide. Reasons cited for suicides usually are crop failure, low prices and high debts.

Families affected by these issues – and by suicides – cite two major reasons for their anger towards the government.

First, the farmers are angry with the state’s suspicion of the poor, which makes paperwork unnecessarily difficult and insensitive towards their recent tragedy.

Laxmi, 36, lives in the Jagdevpur mandal of Siddipet. Her husband died by suicide in November 2020, as his three-acre cotton crop had a low yield and obtained low price. The family had received income support under the Rythu Bandhu scheme, and Laxmi is now waiting for the ex-gratia.

ALSO READ:  All Educational Institutions Shut Down Due To Covid Cases Surge In Telangana

“It has been two months since my husband’s death, and the officials say the delay in ex-gratia is because a letter is missing in my husband’s name in the application. We need the money desperately to repay loans,” she says. Even acquiring her husband’s death certificate required much effort – there was confusion on whether it was to be provided by the panchayat office or the hospital where he had died.

Laxmi’s anger runs deep. “Everytime I go to collect the ex-gratia, the officials asked me to return later. But I work as a farm labourer. I cannot afford to forgo the Rs 300 that I earn from my daily labour in the fields in this paddy sowing season,” she says.

While her family received the benefits promised by one of the government’s high-profile schemes, this was not the case when it comes to the housing scheme. Laxmi said, “We built our house with loans we could not afford, and it led to my husband’s suicide. All promises [that the TRS made] are for election time only.”

Second, the farmers carry a generational-anger for the government’s failure to create conditions to lift them out of poverty. While many farmers do not receive the minimum support price (MSP) anyway, the fear that the new farm laws will completely dismantle the system means the farmers know their struggles have reached terminality and so has the role of agriculture in their lives.

Mallesham, 28, from the Thoguta mandal of Siddipet is a graduate and left his job in Hyderabad to help his father in farming. His father died by suicide in September 2020.

“We have not added a single acre to our land since the 1990s. We do agriculture to keep ourselves where we are; but there is no growth, no scope for aspiration,” he explained. He supports the Delhi farmers’ protests and says the economics of the cotton crop work only marginally with the MSP, but fail in an open market.

“The losses kept building up and eventually killed my father. He used to say that he gained nothing from a lifetime of toil,” Mallesham said. It is not easy for him to speak about his father, who also worked for daily wages at a nearby project construction site.

Mallesham is angry that the Telangana government sought it fit to support the farm laws. “When the procurement centres close, farmers will be at the mercy of private traders. Why is the government supporting middle-men?” he demands. “Are governments formed without the farmers’ support?”

Governments in power seem to forget those who played a role in getting them elected. Anger is a vote in democracies. #KhabarLive #hydnews