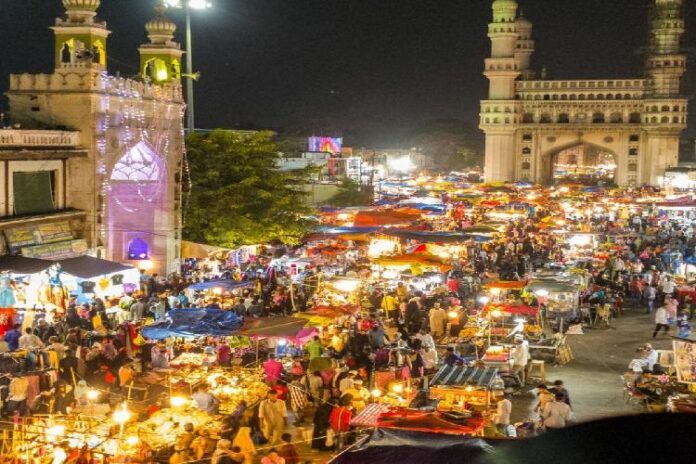 Light pollution is a menace in the city of Hyderabad which is killing the joy of looking up to the night sky, astronomy enthusiasts and scientists have complained.

The past few weeks saw various rare astronomical events, the Jupiter-Saturn conjunction, the triple conjunction of Mercury, Jupiter and Saturn, the Moon passing Mars- but astronomy enthusiasts in the city say that it is no more a thrill to witness these space events, because of the city lights.

A noted city based astronomer Praveen Suryavanshi said that just to witness a full dark sky, one now will have to travel as far as at least a 100 kms away from the city.

“I and my friends from the astronomers society in the city witnessed the Jupiter-Saturn conjunction from our offices and homes respectively. I was in Hi-Tech city that day, and in the shots I managed to get from the event show the kind of pollution from city lights and even the dust that emcompasses the sky now”, Praveen said. He added that the big flood lights, the neon lights on billboards and malls till the Shamshabad area have added to the mess, especially in the last four to five years. “These unnecessary lights and the continuous construction activities have spoiled the city skies so much that even the night sky reflects this light, and on most nights clouds are visible”, he said.

Dr. BG Sidharth, Director of the Birla Planetarium said that the first observatory near the city at Rangapur, 65 kms from the city, has also been affected by the light pollution. “Unless one is very far away, on a hill or mountain, practicing astronomy in today’s time is difficult, which is why the astronomy community here is growing weaker”, he said.

The Japal-Rangapur Observatory under Osmania University open for research and practical work for post-graduate and Ph.D students, as well as for the public, has had the effects of civilisation in the nearby villages, but still has its nights of clear skies, argued Dr. Shanti Priya, Head, Department of Astronomy, OU. However, she agreed that the kind of dark sky experience a few years ago, is something that this generation will never be able to get.

“We have held observation classes in the past few weeks for the conjunction occurrences among other events, for our 40-50 PG and research students. The LED lights around have had an effect on the observatory, but if the government takes some measures to increase the scientific temper while keeping in view the convenience of people around, like installing LED light covers, it will solve the issue to a great extent”, said Dr. Shanti Priya.

According to the world light pollution map, the location of the Rangapur Observatory falls in a rural or suburban transition sky, where the galaxy M33 in Triangulum, a key indicator of sky conditions visible to the eye is difficult to see. Here in the city, the location of the Birla Science Center Observatory is one of the highest light polluted areas anywhere in the world, making it impossible to locate the M33 galaxy in the city sky.

Astronomers in the city now demand that government must take steps to protect the few dark skies left in and around the city like the Kotpally Reservoir area near Ananthagiri Hills, the Pocharam Dam in Medak, the Pakhal lake near Warangal, the Laknavaram Lake area, among others, by making strict policies to restrict urbanisation and declare these spots as Natural Dark Sky Sites.

Amateur astronomers have also brought to light an Archeoastronomy Megalithic site, similar to the Stonehenge 200 kms from Hyderabad, which falls under the village of Mudumal in Mahabubnagar district, where dark skies can be witnessed clearly. They demand that these sites should be preserved and protected for astronomy enthusiasts. #KhabarLive #hydnews