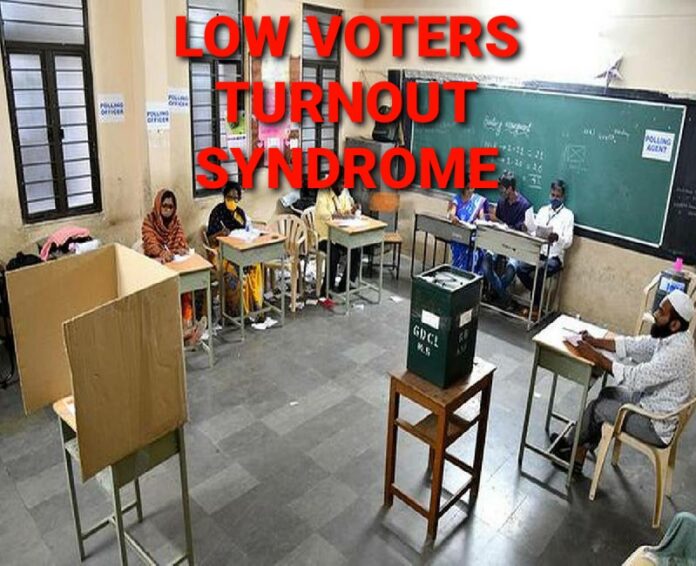 The fear of low turnout termed as  voting day syndrome always haunts the candidates in fray. This will lead to the chances of expected results in the elections. This is the main worry of all political parties in Telangana state.

Even as the campaign for the two MLC seats from the graduate constituencies reached the crescendo by all the political parties and independent candidates, there is one fear nagging most of them. Whether the voters will turn out in good numbers and exercise their franchise in the election scheduled for March 14 has become prestigious for every political party. The election is scheduled on a Sunday and it is preceded by Maha Shivarathri festival on Thursday and the weekend. It has been the experience that people, mainly employees tend to get into a holiday mood and go out of station affecting the voter turnout and polling percentage when the polling day falls on a public holiday.

This is precisely what the political parties are worried about after all the efforts that went into enrolling the maximum number of graduates into the voters’ list this time for what is turning out to be a keenly contested election. Though technically it is only two Graduate Constituency MLC seats, the election will impact 21 districts with polling taking place under the purview of 77 Assembly constituencies falling under 12 Parliamentary constituencies.

The appeal of the ministers leading the campaign in various districts to the voters is even if they relax till the second Saturday, they should return to their places on Sunday and discharge their responsibility. “As educated voters, you can assess, analyse better and elect the party and the candidate that will work for the benefit of all sections of society,” a minister said.

It is not only the ruling TRS, BJP and Congress parties and their candidates who are investing their time and effort on the lines of a general election, but also the Independent candidates like Prof K Nageshwar, a two time MLC and TJS President K Kodandaram, a key figure in Telangana movement and Million March event, who are leading the campaign and meeting different sections of voters every day and seeking their vote.

Never before an MLC election from graduate constituencies attracted such public attention for the intensity of the election campaign. For BJP, every election counts to realise its ambition of dislodging the TRS in the next general election while the Congress party is of the firm belief that people are fed up with both the TRS at the State and BJP at the Centre.

For the ruling TRS, winning both the MLC seats represented by S Vani Devi and Palla Rajeshwar Reddy is important to quell the disenchantment and anti-incumbency setting in some sections of society. It has been targeting the BJP government at the Centre for discrimination towards Telangana in sanctioning projects and resources.

For the BJP, a win in the MLC election will help prove that their success in the Dubbaka by-election and the good performance in GHMC elections was not a flash in the pan and that their voter base was steadily growing.

The Congress leaders on the other hand were enthused with the response to their recent campaigns on farmers’ issues, rising prices, growing unemployment and support to their candidates Chinna Reddy and Ramulu Naik. They are going to people with the message that both the TRS and BJP are headed by authoritarian leaders.

The ruling party on the last leg of the campaign is cashing in on the assurances given to the employees’ associations by Chief Minister K Chandrasekhar Rao on Tuesday to win the support of employees and teachers.

While KCR’s assurances on higher fitment to employees, enhancement of retirement age to 61 years, repatriation of Telangana employees working in Andhra Pradesh are expected to infuse a feel-good factor among employees, opposition parties are quick to point out that a large number of employees are sceptical, notwithstanding the statements of support to the TRS government by their association leaders.

The polling percentage in Hyderabad-Ranga Reddy and Mahabubnagar graduate constituency in the last election in 2015 was just 37.72 per cent and in Warangal-Khammam and Nalgonda districts, it was 54.62 per cent.

However, this time the number of enrolled voters almost doubled in both the graduate constituencies because of the interest taken by the political parties and voters and it should translate into a better percentage, said official sources. The graduate constituency comprises both urban and rural areas in the districts and normally voter turnout in rural areas is expected to be better.

Meanwhile, the office of Chief Electoral Officer is looking to the complaints it received from a candidate about the enrollment of bogus voters in Warangal, Khammam and Nalgonda graduate constituency on Tuesday.” We are verifying the rolls and if found true action will be taken against those who resorted to discrepancies in enrollment by giving false information”.

The final electoral rolls were published for both the Graduate constituencies on January 18 and 23 respectively. In the recent GHMC election when the election was held on December 1 preceded by a long weekend (as Nov 30 happened to be Guru Nanak Jayati), the polling percentage was only 46.6 per cent. #KhabarLive #hydnews