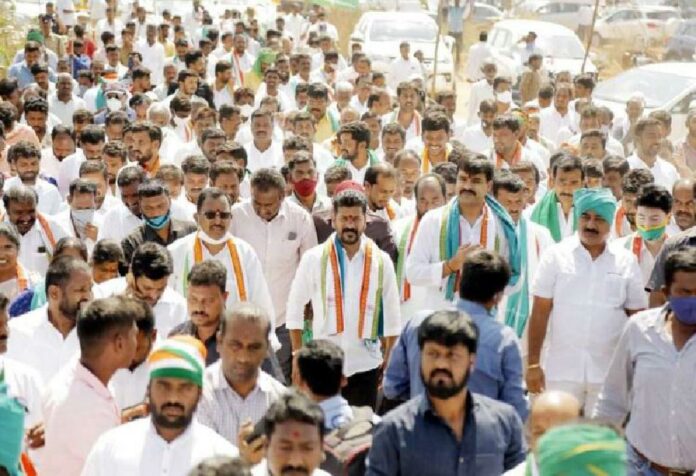 In a unique bid of attempt the senior leaders of Telangana Congress party, who would confine themselves to holding press meets in Hyderabad, are visiting all corners of the state to consolidate support from cadres in the form of Padyatra and Deeksha. Why this attempt? Let’s find more.

Congress leaders in Telangana seem to be positioning themselves as potential political contenders amid the party’s efforts to announce a new chief for the Telangana Pradesh Congress Committee (TPCC). Senior party leaders are flocking to all corners of the state, in a larger bid to consolidate support from cadres.

Leaders like Malkajgiri MP Revanth Reddy, Congress Legislature Party leader Batti Vikramarka, besides others like Jeevan Reddy and Sridhar Babu are organising meetings and protests to take up issues of voters, while Sangareddy MLA Jagga Reddy, Bhuvanagiri MP Komatireddy Venkat Reddy and others are planning yatras in their respective strongholds.

In the last week of January, Revanth Reddy organised a ‘Rajiv Rythu Deeksha’ in Armoor of Nizamabad, where he tried to amplify the cause of turmeric farmers and their long-standing demand to set up a Turmeric Board. Over the last week, the Malkajgiri MP was busy touring southern Telangana’s Nagarkurnool district with his ‘Rajiv Rythu Bharosa Yatra’. The MP who initially sat for a day-long protest, converted it into a ‘padayatra’ (foot march) along with Mulugu MLA Seethakka and other functionaries.

During the padayatra, Revanth hit out against the farm bills brought by the Union government and also blamed the TRS government for supporting each decision taken by the BJP-led government.

Meanwhile, Bhuvanagiri MP Komatireddy wants to start his yatra to highlight the delay in completion of irrigation projects in the state from February 20 to February 26. The yatra is expected to last for 120 km. Senior leader Bhatti Vikramarka and other leaders undertook ‘mukha-mukhi’ (Face to face) and ‘Polambata’ (Farm path) programmes from February 9, which are expected to continue till February 21.

Unlike the past, where party’s top leaders used to confine themselves to holding press meets at headquarters, the Congress leaders seem to be putting efforts to carry outreach drives. The move comes amid the BJP making major inroads into Telangana with a victory in the Dubbaka Assembly bye-election and a good performance in the Greater Hyderabad Municipal Corporation (GHMC) polls.

However, the unprecedented wave of yatras by the leaders of the Congress seems to be aimed at capturing the TPCC position, according to sources in the party. The state unit of the party has remained without a chief since former TPCC President Uttam Kumar Reddy resigned his post, following the party’s drastic defeat in the GHMC elections. He is serving as the interim chief until his successor is chosen.

The post is seeing several contesters and is also crucial for the party ahead of the 2023 Assembly elections in Telangana. However, the yatras which appear to be taking place at different places, under the leadership of different leaders, are continuing to suggest that the Congress still remains divided on its next state unit chief.

Speaking to #KhabarLive, All India Congress Committee (AICC) spokesperson Dasoju Sravan Kumar said that as decided by the party, there was no question of change in the TPCC chief until the Nagarjuna Sagar Assembly bye-poll. When asked if multiple yatras by Congress leaders are aimed at bagging the TPCC chief post, Dasoju said, “There is nothing wrong in aspiring. I think every party leader has a right to aspire to become the chief or leader of the party.”

The AICC spokesperson also said that the multiple padayatras by party leaders is good for the Congress as they’re taking up causes pertaining to people and farmers. “It is good that all of them are on the roads and working for the farmers, which will also benefit the party,” he said.

AICC Telangana in-charge Manickam Tagore had earlier said to #KhabarLive that the appointment of a new chief for the TPCC will be done after the completion of the Nagarjuna Sagar bye-poll only. #KhabarLive #hydnews