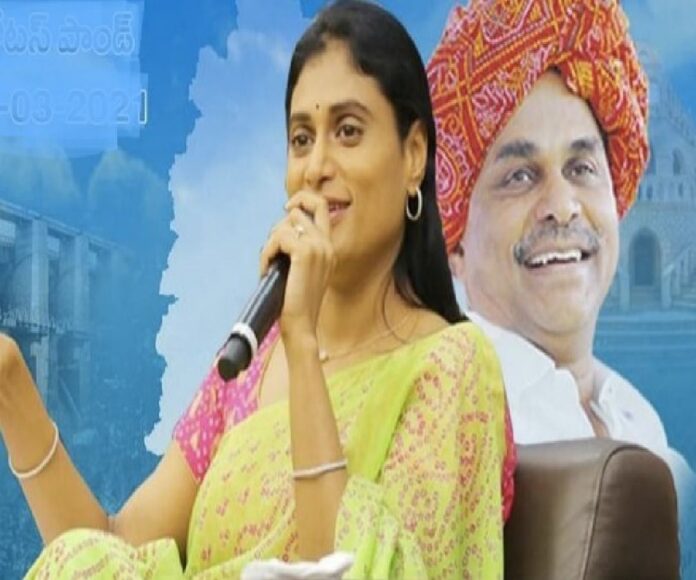 According to political pundits, the significance of launching a political party in Telangana is sheer to gain political milage with weaknesses and faure of parties with a woman tag.

Ahead of launching her political party on July 8, YS Sharmila, daughter of former chief minister YS Rajasekhar Reddy, sat on fast in Hyderabad on April 15 demanding among other things, employment to youth in Telangana. She declared that she would continue her agitation for the filling up of the government vacancies.

Anyone who observed Sharmila’s political statements made so far referring to Telangana State, will conclude that she has no clue about the developed Telangana and the way it has been made a role model by Chief Minister K Chandrashekhar Rao during the last seven years.

Sharmila is merely making demands that lack essence, basis or evidence. So far, the reasons present by her on why she is launching a party have no takers.

At the Khammam public meeting, she said she wants to question the present dispensation. If that be so, Sharmila will go down in history of this country as the only person who launched a political party to merely question the state government.

Which scheme, programme or project will  Sharmila question?

ALSO READ:  Is Your 'Blood Sample' Flowing Down The Lab Sink?

Is it the Kaleshwaram project, considered to be a man-made wonder and which has won accolades the world over? Will she question the government on how it turned Telangana, which was on the verge of power crisis, into a power surplus state?

Will she question the government on why it is supplying quality and free power to the agriculture sector and uninterrupted power to all sectors? Will she question the KCR Kits scheme which is helping pregnant women or the financial help to young women of all communities for their marriage through Kalyan Lakshmi and Shaadi Mubarak schemes?

Unfortunately for Sharmila, she does not have a single programme, policy or scheme that she can question!

In a vibrant democracy like ours, anybody can question the government but launching a political party can never be the reason for this.

No political leader or anyone ever had been successful launching a political party all by himself or herself.

In the past, leaders like Nadendla Bhaskar Rao, KE Krishnamurthy, Jana Reddy, Mudragada Padmanabham, Vijayashanti, A Narendra, P Indra Reddy, Devender Goud and others launched political outfits and wound them up sooner or later.

At a time when national parties like the Congress and BJP are unable to make gains against the TRS in the State, what will Sharmila gain under these circumstances?

Why should people or leaders from other political parties rally behind her? There is absolutely no sentiment or a great issue on which she can take a political ride. Telangana state does not require another political party as there are a dozen already in existence.

The turning point came in 1996 when the people gave a fractured verdict. For the first time, the BJP dethroned Congress and Vajpayee became the PM for 13 days. After the BJP failed to clear the floor test, 13 regional parties formed the United Front that ruled for two years.

Since 1996, all regimes at the Centre have been coalition governments, led either by the Congress or BJP. Since then, the days of a single party forming the government at the Centre were over till 2019 when the BJP led by Modi secured 303 seats.

A cursory look at the rise and success of the regional parties shows that their existence and ability to come to power was always based on mass issue or sentiment.

In Tamil Nadu, the DMK and later AIADMK came to power and still exist drawing their strength from the Dravidian movement.

Parties like the Samajwadi Party, BSP came into being on the issues of SCs, STs, Minorities and BCs; TRS was born out of a people’s movement for separate Telangana State.

TDP came to power appealing to the Telugu pride and sentiment; CPI and CPM were born out of Communist ideology while the AIMIM and Akali Dal were formed on religious lines. AAP rode to power on the issue of statehood for Delhi.

Sharmila’s party definitely does not fit into any of these categories.

The question remains — for what purpose is Sharmila launching her party, and at whose behest?

Such experiments of starting new political parties are nothing but quixotic and end up like Don Quixote de la Mancha as described in the Spanish novel written by Miguel de Cervantes. #KhabarLive #hydnews