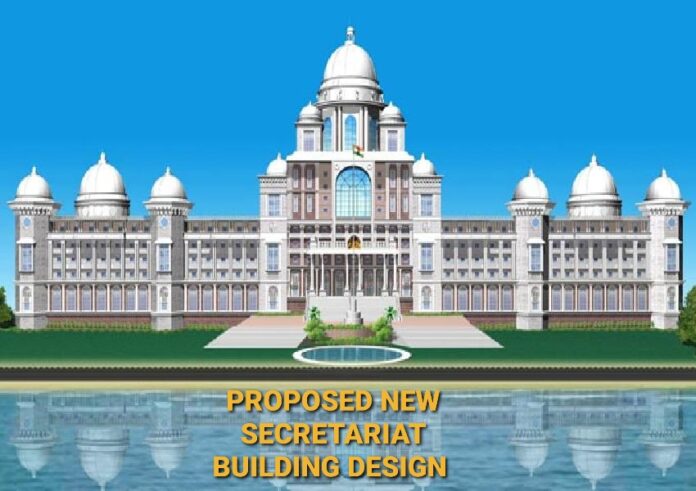 The new secretariat complex will be like a memorial to the sacrifices that Telangana’s people made for political freedom and an architectural marvel in design and development.

Like always, the naysayers and the opposition parties have started lambasting the government on it. They say the old complex, which was good for the 23-district united State is more than good for the new State, which is less than half of it. But the government averred that the present complex was randomly built at different times, lacked infrastructural facilities like adequate parking, fire safety and modern features for a State secretariat. The idea was mooted in 2016.

The government alternatively contemplated to find a suitable place for the new complex elsewhere like in Chest Hospital grounds, Erram Manzil and Gymkhana grounds to avoid demolition of the present structures. But for various reasons, the idea did not materialise. Because of its centrality in Hyderabad city, as the large part of the complex is old and required demolition, the government reverted to the idea of building a brand new integrated secretariat complex at the same site. A Cabinet decision to that effect was made on June 19, 2019. The foundation stone was laid on June 27. Meanwhile, five public interest litigations were filed on the government decision in the High court.

ALSO READ:  ‍‍Bad Roads Fixing In Hyderabad, Just A Call Away with  GHMC

Old Secretariat Building
A ministerial sub-committee and high-powered technical committees were constituted to study the state of the old complex to make suitable recommendations. The technical committee, in its report, found that it was not possible to make any changes to the conditions prevailing in the existing buildings.

There were eight blocks located in the congested lanes where fire service vehicles cannot enter and it was not feasible to have fire safety measures. They observed that the secretariat complex had 10 blocks, with accommodation of 4.45 lakh sq feet, of different ages ranging from more than 100 years to 20 years — varying from dilapidated condition to working condition. Except for two blocks, other blocks were reported to be in dilapidated condition. The building blocks were disjointed and scattered over an area of 25.5 acres.

The repairs to the old buildings with very old plumbing, electricity, etc needed heavy expenditure. There were no adequate conference facilities, parking and a green area. The cost could be as good or even more than the new construction, if it was attempted to make the repairs and carry out renovation to create spaces and other suitable facilities, without demolition.

So it was felt that it was better to demolish the existing structures and build an integrated building complex with modern facilities. The ministerial sub-committee concurred with it. The government took the decision. The proposed integrated building complex with 7 floors is designed to have about 7 lakh sq feet floor area. The new complex is estimated to cost Rs 600 crore.

Court Green Signal
The main grounds of the PILs were: no need for demolition; not a priority; unilateral decision by the government and huge expenditure. The HC bench refused to interfere in the State government’s decision saying it does not find any irregularity in the Cabinet decision. The bench dismissed the PILs filed separately between 2016 and 2019.

Yet, the opposition to the new secretariat continued. The Pradesh Congress Committee president of Telangana went to the National Green Tribunal (NGT) on the specious grounds of environmental damage. The NGT found no merit in it and dismissed his plea.

Every State has a Secretariat or government building complex depicting the history, culture and ethos of its people. Karnataka has the grandest of them all, built in 1956. Karnataka was not short of any buildings either in Bangaluru or Mysuru. Kerala, Himachal Pradesh and Tripura have beautiful Secretariat buildings. Even small States in the northeast region have beautiful government buildings depicting their architecture and culture. Ahmadabad and Naya Raipur Secretariats are modern examples.

So what is wrong if Telangana wants to build a Secretariat depicting the architecture, culture and ethos of the State, in place of a drab and haphazard-looking agglomeration of old blocks? It is a new State and certainly needs to have its new identity. The Secretariat, the seat of the power of the State government, is one of the embellishments of that identity. Even the Supreme Court concurred with the decision of the HC.

Apart from the incongruity of the old structure, there is no need for a government to live in an unhappy place where the State’s identity was ridden roughshod over for 58 long years. There is a need to have a complete break with that neo-colonial past and breathe a fresh air of political freedom in the new State.

It will have concrete structures in 2.4 acres of the 27.5 acre campus and the rest will be dedicated to greenery, landscaping, footpaths, parking and other accouterments. If such a prestigious structure is coming up in place of an unorganised old structure at an affordable cost, there is no reason to oppose it.

When Andhra Pradesh is said to have spent about Rs 1,100 crore for a temporary Secretariat, what is the issue if Telangana builds a permanent integrated secretariat complex with half that amount? Telangana needs a new government building complex. It will also be like a memorial to all the sacrifices of the Telangana people made in their long and poignant struggle for political freedom. #KhabarLive #hydnews