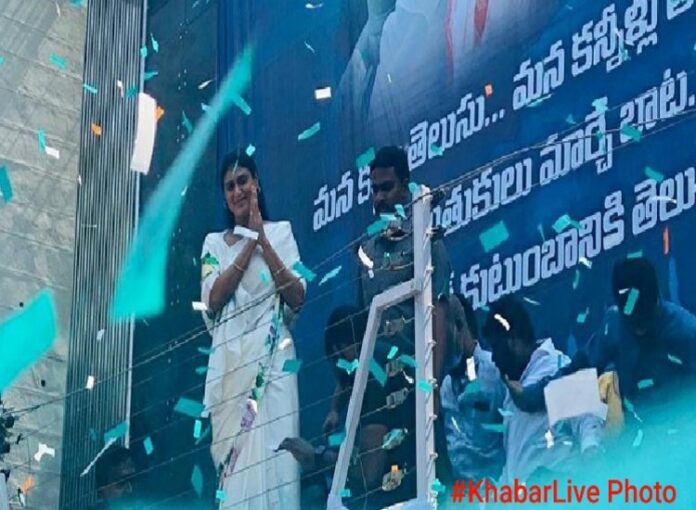 When ‘Lotus Pond’ bloomed with happiness, YSR family’s residence in posh Jubilee Hills in Hyderabad, was abuzz with activity morning as a large number of YS Sharmila, (sister of AP CM Jagan Reddy)  supporters descended there from various parts of the state.

A festive mood prevailed at Lotus Pond amid the beating of drums and bursting of crackers. A huge picture of Sharmila with her father and hailing her leadership was installed at the residence.

Sharmila, who arrived with her husband Anil Kumar from Bengaluru on Monday night, was holding the meeting with YSR loyalists from the united Nalgonda district, which has now been split into three districts.

This will be the first in a series of meetings likely to be held by Sharmila with YSR loyalists from Telangana over the next few days. She will be eliciting their views before deciding her next course of action.

While there have been speculations for the last few days that Sharmila will float a new party in Telangana, there has been no confirmation or denial from the YSR family

When a local channel managed to get close to her, Sharmila was asked a barrage of questions. She was asked about her political plunge in Telangana, the party’s agenda and also about when the launch would happen, to which she replied, “You will know soon”.  Soon #KhabarLive managed to convince her to throw some light on the meeting that happened today. She said, “The meeting was to know the ground realities. They understand the ground realities and take their suggestions. I plan to meet representatives from every district soon.

When asked why she wanted to know the ground realities in Telangana, Sharmila replied, “There is no Rajanna Rajyam here. Why is it not there? Why can’t we bring it?”

Rajanna Rajyam is a reference to the rule of Y.S. Rajasekhara Reddy in undivided Andhra Pradesh, she added.

YSR, as Rajasekhara Reddy was popularly known, was chief minister of Andhra Pradesh from 2004 to 2009, when he died in a helicopter crash.Following his father’s death and subsequent developments in Congress, Jagan Mohan Reddy quit the party to float YSR Congress Party.

Sharmila said though many years have passed since the death of his father, his popularity has not waned. “His rule was the golden rule. Every farmer lived like a king. He built pucca houses for every poor. He wanted to see that every poor student gets good education and a job. He used to say poverty is a curse. Since ill-health pushes the poor into debts, he brought Arogyasri. Today this is not the situation. I want Rajanna Rajyam back. I believe only we can bring it,” she told #KhabarLive.

Sharmila said the meeting was the first step as part of the process. “I don’t know the ground realities like you and what you see and experience in your respective places. Give me your suggestions and advice. I have come to hear you and understand,” she added.

“We don’t know if this exercise is aimed at forming a new party or strengthening YSR Congress Party in Telangana. Whatever decision Sharmila or Jagan take, we will abide by it,” said a YSR supporter.

Sharmila’s supporters recall the active role she played in mobilizing people’s support through her yatra across undivided Andhra Pradesh when Jagan Mohan Reddy was in jail in a disproportionate assets case in 2012.

The Jagan Mohan Reddy-led YSR Congress Party had not contested Telangana Assembly elections in 2018 and Lok Sabha polls in 2019 as the party was focusing on Andhra Pradesh. As the party wrested power in Andhra Pradesh from Telugu Desam Party (TDP) in 2019, YSRCP is believed to be working to revive its activity in Telangana.

In 2014 elections, YSRCP had bagged three Assembly and one Lok Sabha seat in Telangana. However, all of them later joined Telangana Rashtra Samithi (TRS). Since then, the party was almost inactive in Telangana, which was carved out of Andhra Pradesh in June, 2014.

Sharmila enjoys a huge support among the YSRCP cadres. Her supporters recall the active role she played in mobilising people’s support through her yatra across undivided Andhra Pradesh when Jagan Mohan Reddy was in jail in the disproportionate assets case in 2012.

Jagan Mohan Reddy-led YSR Congress Party had not contested the Telangana Assembly elections in 2018 and Lok Sabha polls in 2019 as the party was focusing on Andhra Pradesh. As the party wrested power in Andhra Pradesh from the Telugu Desam Party (TDP) in 2019, YSRCP is believed to be working to revive its activity in Telangana.

Y.S. Rajasekhara Reddy, who died in a helicopter crash in 2009, enjoyed huge support in Telangana. The YSRCP leaders believe that many people in the state still revere the later leader for several revolutionary welfare schemes implemented by him.

Sharmila, who had actively campaigned for the YSR Congress Party in 2014 and 2019 polls in Andhra Pradesh, is also said to enjoy good support among the party cadre in Telangana.

Earlier, while addressing the state executive committee of the Telangana Rashtra Samithi at Telangana Bhavan on Sunday, TRS party president and chief minister K Chandrasekhar Rao suddenly raised the issue of the launch of a new political party in Telangana.

He did not name either the party name or the person who will be launching the regional party in the state. But he said it was not so easy to launch and run a new political party these days, amidst such a tough competition.

“It will disappear as fast it is launched,” he said, without referring to which party he was talking about.

However, it was obvious that the TRS chief was talking about the proposed political party to be launched by YSR Congress party leader and Andhra Pradesh chief minister Y S Jagan Mohan Reddy’s sister Sharmila.

At the meeting, KCR recalled that in 1995, he had won the assembly elections from Siddipet and his friend Ramachandra Reddy from Dommat (presently, Dubbak) on Telugu Desam Party ticket. Later, Ramachandra Reddy had quit the TDP along with K Jana Reddy and K E Krishna Murthy and launched a new political party.

“But within no time, they wound up the party and jointed the Congress. In the immediate next elections, Ramachandra Reddy did not even get the party ticket. Though he was a good leader, he had to pay the penalty for floating a new political party without any strategy. TRS in the only party after the TDP which survived,” he said.

This shows the alertness of ruling party and assessment of new political entry. But he forgot the unfilled promises to Telangana people may reverse with secret revolt, which is happening in the state silently. Anyways, time will tell the reality fate of the rulers. #KhabarLive #hydnews