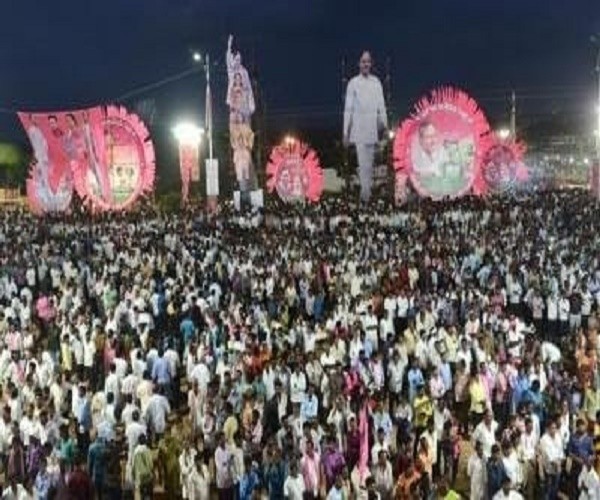 The mega public meeting held by the Telangana Rashtra Samithi at Kongara Kalan village on the outskirts of Hyderabad on Sunday was a disappointment not only for the political observers and the media, but even for the TRS leadership.

Though for the public consumption, the TRS leaders are saying the meeting was a grand success with an unprecedented turnout, they are not claiming, as they had gone it before the meeting, that the turnout was 25 lakh.

They are now saying the party leadership is extremely happy with the mobilisation of crowds.

But, reliable sources in the TRS say party president and chief minister K Chandrasekhar Rao was not at all happy with the crowd mobilisation and called for constituency-wise reports on the same from the party leaders.

The intelligence sources reportedly told KCR that the total turnout at the Kongara Kalan meeting, including those who were stuck up on the outer ring road and elsewhere, was not more than five to six lakh.

Preliminary reports indicated that in many constituencies, the local TRS leaders did not evince interest in mobilising the crowds as they had realised they would not get the party tickets for the next elections.

This is because KCR has already indicated that except three or four MLAs, all the sitting MLAs would be retained for the coming elections and he would announce the list in September last week.

This has taken the steam out of the ticket aspirants and they thought it would be waste of money to mobilise the crowds.

Even the sitting MLAs have taken it easy as they are now sure of their tickets; so, there is no point in pleasing the party leadership.

ALSO READ:  How To Ensure Your Remote #WFH Staff Is Productive In COVID-19 Scenario?

“Had the KCR not announced that all the sitting MLAs would be retained, there would have been competition among the ticket aspirants within the constituency and hence, they would spent money to bring crowds to the meeting to get into the good books of KCR,” a party leader said. #KhabarLive