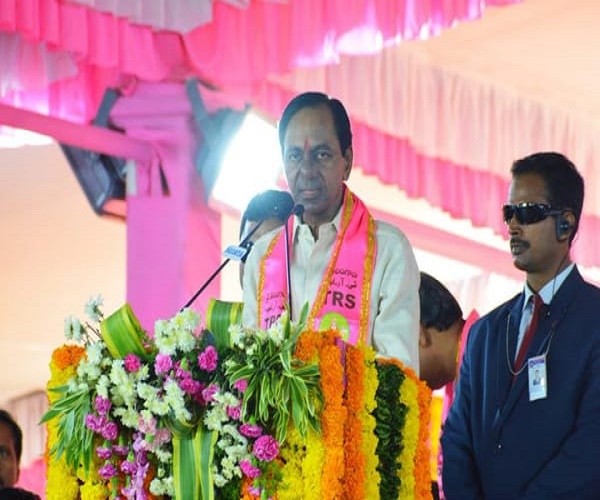 Telangana CM K Chandrasekhar Rao urged the people of the state to not become slaves of parties dictated from Delhi, and called for emulating Tamil Nadu for their self-respect. Notwithstanding such a rhetoric KCR has not said anything on the centre despite state having a long list of unfulfilled demands. KCR’s talk is merely an attempt to rouse emotive issues on the eve of elections.

Though the Telangana sentiment catapulted him to power in 2014, the 2019 mandate would be on the performance of his government against the expectations he roused. As he is pitted against the national party congress , KCR attempts to fuel regional identity by invoking Tamil Nadu model. But, the emergence of TRS and socio-political idiom of Telangana have nothing to do with the Dravidian political legacy superimposed by the filmy glamour of Tamil Nadu politics.

The Telangana movement was more about a separate state which is essentially a politico geographic territory rather than a fervent socio political identity . It was not federal movement against the imposition of Hindi as in the case of Tamil Nadu or the exclusive linguistic identity .

The Hyderabad state which now largely constitutes the Telangana was in existence from 1948 to 1956, while Andhra state carved out of composite Madras state was in existence from 1953 to 1956. The merger of the two states was questioned even at the time of formation of Andhra Pradesh. But, the united telugu state was crated with some promises for the Telangana region.

As these promises embodied in Gentleman’s Agreement remain unimplemented , the movement for separate state of Telangana begun to oppose the dominance of yet another region of Telugu land itself. On the contrary, the Tamil Nadu politics are woven around Tamil nationalism. While Telangana represents sub regional sentiment against the composite linguistic identity, the Tamil Nadu politics and society represent a strong and legitimate Tamil linguistic aspirations.

While the Telangana movement was for only a separate state , the Tamil Nadu regionalism is a combination of linguistic nationalism and radical social reform movement that questioned the casteist orthodoxy . The Dravidian politics is more a social revolution though its character was largely diluted subsequently at the altar of political expediency.

Therefore, it is erroneous to draw any parallels between Telangana and Tamil politics
Besides, the TRs has been pusillanimous in its attitude towards centre. Many of the provisions of bifurcation act remain unimplemented. The long standing demands of Telangana remain unattended to as the state is not on the political radar of the ruling dispensation at the centre.

The High Court is yet to be bifurcated. Bayyaram steel plant is given a go-by. The centre refuses to accord national status to any of the irrigation projects in the new state despite BJP leaders explicitly promising to this effect in the run up to 2014 elections.

The Kazipet coach factory remains a dream. The rail connectivity has not been improved. The NDA government has cancelled the Information technology and Investment Region (ITIR) sanctioned by the previous UPA regime .

Yet, the TRS refuses to raise any strong protests except occasional statements. This is more due to political proximity TRS supremo enjoys with BJP all India leadership

Yet , KCR raising the bogey of revolt against Delhi sans any rationality. He has not even touched on his non-Congress , non-BJP front in his speech at the massive rally held near Hyderabad on Sunday.

Thus, KCR invoking the Tamil model and referring to Delhi dominance is a calculated move to put Congress in dock rather than any serious attempt to assert the Telangana sub-regional identity. #KhabarLive