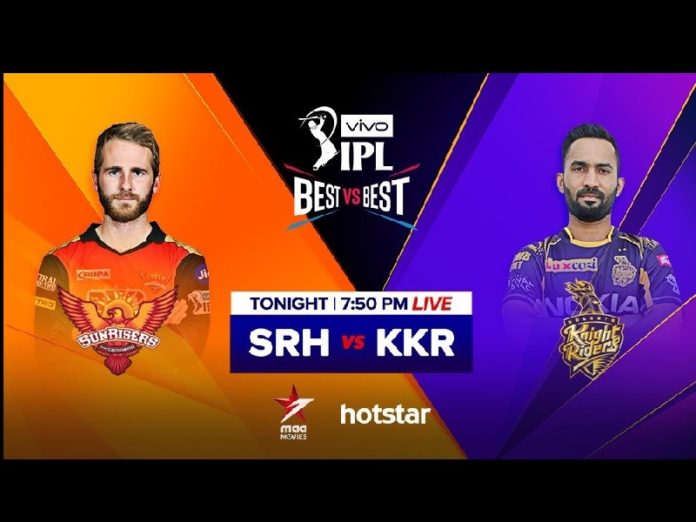 With Royal Challengers Bangalore winning their last match, things have certainly opened up in the Indian Premier League. RCB and RR currently stand at the bottom of the table, but still, stand a chance to qualify for the playoffs. Right above them are Sunrisers Hyderabad and Kolkata Knight Riders who will be facing off each other in the upcoming fixture at Hyderabad in a bid to get back into the top half of the table.

While Sunrisers Hyderabad still have an extra match, time is running out for Kolkata Knight Riders. Both SRH and KKR have just four wins to their name and would need at least three more wins from their remaining six and five matches respectively matches which is certainly not going to be easy considering how competitive this IPL has been.

MATCH PREVIEW
SUNRISERS HYDERABAD
The win against Chennai Super Kings couldn’t have come in at a better time for Sunrisers Hyderabad. Having lost three back to back games prior to that, Sunrisers were struggling and staring down the hole before their victory over the best side of the tournament.

Without Kane Williamson in their lineup, Sunrisers Hyderabad were clearly struggling to find depth in their batting lineup as no one except Vijay Shankar looked confident in the middle in any of the matches they played without Williamson. With Williamson back, the Sunrisers look a stronger side on all accounts.

The opening pair of Jonny Bairstow and David Warner has without a doubt been the standout feature of their side this season. Warner and Bairstow have been involved in multiple fifty and century-plus stands this season, which has been the reason for almost all their wins in the tournament so far.

Their last match, however, was set up by their excellent bowling in the middle-overs and some innovative bowling changes and accurate field settings. Rashid Khan was brilliant against CSK and will have a key role to play against Andre Russell considering the success Imran Tahir has had against him. It’s not that Sunrisers Hyderabad do not have chinks in their armors, but Kane Williamson has done a stupendous job of hiding those chinks and getting the best of their side. It is not going to be easy for them against power-packed KKR lineup, but as seen in the last match, the last year’s runners-up are well and truly capable to topple any side on their day.

KOLKATA KNIGHT RIDERS
As compared to the earlier half of the tournament, things haven’t been as bright for the Shahrukh Khan owned franchise. Kolkata Knight Riders have now lost four matches in a row resulting in a steep slide from first position in the points table to the sixth. The last time they ended up on the happier side was against Rajasthan Royals around two weeks ago.

Their misfiring top-order and over-reliance is clearly apparent which was further emphasized in their game against Royal Challengers Bangalore where lack of time for Andre Russell and Nitish Rana cost them two important points. While Andre Russell has without a doubt been the most valuable player in this edition of the tournament, none of their other players have been consistent enough.

Their batting has struggled on the whole with Robin Uthappa scoring at less than run a ball in almost each of his outings. His slow starts has played an instrumental role in where the Knight Riders eventually finish while batting first and has put immense pressure on batsmen to follow while chasing huge totals – as was the case against RCB in their previous match.

Unlike their batting, their bowling hasn’t been as inconsistent. While Kuldeep Yadav hasn’t been able to deal the same level of damage that he does while playing for India, the other bowlers have done decently. Andre Russell and Prasidh Krishna have done reasonably well for them and the inclusion of Harry Gurney has provided their bowling attack with another dimension. With the likes of Piyush Chawla, Nitish Rana, and Sunil Narine too at their disposal, their bowling certainly doesn’t lack in variety.

MATCH PREDICTION
It’s going to be an exciting battle with both teams eyeing a slot in top four and not many matches to go. A win here carries significant importance for both the sides as that will not only push them into the top half but also help them keep a margin of safety. While Kolkata Knight Riders did exceedingly well in the last match to get close to the mammoth total posted by RCB especially after the start they had, it won’t be as easy to score against Sunrisers’ bowling lineup. KKR are a little too over-reliant on Andre Russell and Nitish Rana whereas Sunrisers Hyderabad have a better-balanced side with the likes of Bairstow, Warner, Shankar, and Williamson around. On top of this, Sunrisers Hyderabad are playing at home and due to that as well as the above reasons, Sunrisers Hyderabad are better placed, albeit slightly, to emerge on top in the upcoming encounter.

OUR MATCH PREDICTION: Sunrisers Hyderabad To Win this Match. #KhabarLive