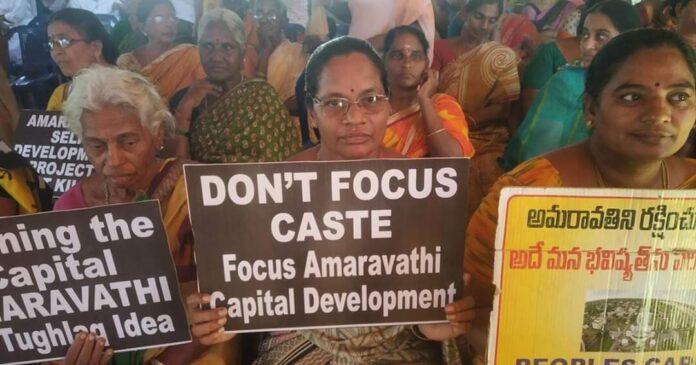 For 43 days since December 17, thousands of farmers in 29 villages in Amaravati in Andhra Pradesh have been staging determined protests. They believe the state government has betrayed the promises made to them in 2014 when they joined a land pooling scheme to allow a new capital to be constructed.

Andhra Pradesh had to build a new headquarters after the state was bifurcated in 2014. The old Andhra capital of Hyderabad became part of the new state of Telangana. The Telugu Desam Party government in power at the time rushed through with plans for a new city in Amaravati, near Guntur and Vijayawada.

Six years later, thousands of farmers who gave up almost 33,000 acres of land for the construction of Amaravati have been left in the lurch. After the state government changed hands in May, the new chief minister, Jaganmohan Reddy of the YSR Congress, decided to build three capitals instead of one. While Amaravati will become the legislative capital, Kurnool will be the judicial capital and Vishakapatnam will be the executive capital. This, said Reddy, would spread the fruit of development throughout the state.

This decision was made in a most undemocratic manner. The farmers of Amaravati were not adequately consulted. They had signed up for the land pooling scheme because it promised to raise the value of their agricultural plots after they were transformed into urban real estate. With the new three-capital plan, this is unlikely to happen.

When the farmers began agitating against this decision, Reddy’s government unleashed the police on them. Protestors were brutally assaulted, women protesting peacefully were beaten up and cases filed against them. The police action was so extreme that the Andhra Pradesh High Court was prompted to take up the matter voluntarily and ask the government why its officers should not be punished.

The 29 villages are facing extreme surveillance. Farmers said that drones were used to keep an eye on them and until the court intervened, they were asked to show their Aadhaar cards as they moved within their villages. The chief minister has not bothered to hold talks with the agitating farmers to allay their fears that the development of their land that the state government had promised will be suspended.

One of the reasons for the YSR Congress government is scaling back construction work in Amaravati are the allegations of largescale corruption when the previous Telugu Desam Party government started the project. Former chief minister Chandrababu Naidu has been accused of insider trading in land deals after the capital was announced in 2014.

However, the Reddy government has not offered convincing answers about how it plans to avoid the same kind of corruption as it prepares to build not one but three capitals. How does it expect farmers and other land owners in Kurnool and Vishakapatnam to voluntarily give up their land given the experience of Amaravati?

Amaravati has showed farmers that Andhra Pradesh lacks consistency in policies. In the ego battle between the state’s leaders, policies are changed whimsically with little regard for the people are affected by them.

Reddy has demonstrated scant regard for democratic norms in pushing for his three-capital formula. When the law to implement this decision was halted in the Legislative Council, Reddy decided to dissolve the council itself on Monday. Imagine what would be the reaction if the Bharatiya Janata Party government at the Centre decides to dissolve the Rajya Sabha because it refused to pass a law?

The Andhra Pradesh government must ensure that it listens to the voices of the farmers. #KhabarLive