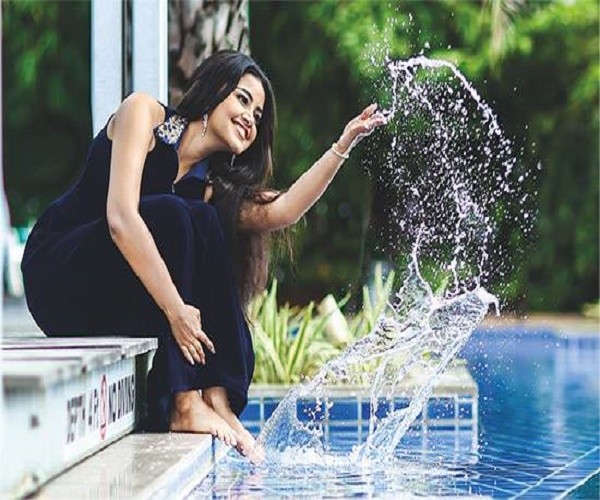 Looks like yesterday when this Kerala Kutti came like a fresh breeze in the iconic Malayalam film Premam. She became a star overnight. With her girl-next-door looks, big eyes and thick hair, she simply walked into the scene of success.

This wonderful actress has already been giving back to back hits for the past three years. As she gears up for her upcoming release of the movie Hello Guru Premakosame with Ram Pothineni, Anupama Parameswaran has been extremely busy. Amidst her promotional activities, she squeezes in some time out to talk to us about herself and her journey in the film industry that has become a second home for her.

Life in Kerala Backwaters
Born in a humble middle-class family and settled in Irinjalakuda in Kerala, life for me was all about having my favourite ice cream, chilling out with my school friends, unfortunately, having to study once in a while as well.

Love for acting
Though I always had a great love for acting, I never ever thought that I would make it to films. I left my graduation to learn acting.

I could get into films, perhaps, because, I was in the right place at the right time. I am very thankful to God for the great films and opportunities that are coming my way.

The first experience
It was totally unexpected. Premam was in the making and a friend of mine told me to send my photos. I sent them a few, without even telling anyone at home because I knew there would be a big uproar. Anyway, when my parents eventually came to know of it. They were absolutely sure that I would not make it. I faced a stiff competition and was chosen, though not in the very first shot. Initially, the team was not happy with my diction. Then I worked on it and ultimately made myself acceptable.

Parents’ reaction
As expected, my parents were totally against it. Eventually, they understood my passion and accepted my decision. Once the movie was released, they felt happy and proud of me.

Playing the same role twice
It was a mixed feeling. As I knew the character, I could perform better. At the same time, I was all the time thinking of ways to make it different. I was 18 when I played the Malayalam version. But after two years I was playing the same role. So, it was like 20 year-old being a teenager.

Learning a new language
After Premam I started getting a lot of offers from all languages. The thought of making a career in the films was just sinking in. Therefore, I decided to go slow. It was not very difficult to pick up Tamil as it was akin to Malayalam, but with Kannada and Telugu it was a different story. Yet, I made up my mind that I should dub for myself and made a conscious effort to pick up languages.

Choice of roles
I look at every film as a whole. For me, the priority has always been the script and the role I am given. How my role differs from the previous one I did and if I will be able to do justice to it, are the questions I ask myself. If the answer is yes, I go for it. Thankfully, I have been offered good and meaty roles.

The bitter note
I t is all media created. What you see on screen is the result of a team effort. And when we work as a team, it is common to have a free exchange of creative suggestions, besides some differences. It was a very small incident of Prakash sir giving me a suggestion which was blown out of proportion. They went to the extent of saying that we were unable to stand each other. It is sad, but then I feel that it is a part of being on the constant radar of media. Once again I clarify there is no bitter note.

ALSO READ:  A Child’s Hunger To Grow Is The Fuel They Need

Handling failures
This is an industry that makes you taste success and it may throw you down overnight. The night before any release is a dreadful one because while making the film everyone associated with it has a positive outlook, but when it is released it is all about how the audience receive it. And this is something that we cannot predict. I realized this at the very beginning. Therefore, I enjoy success, but don’t get carried away. I learn from my failures rather than being upset. I strive to give my best to all my roles & leave the rest to the audience to decide.

The effects of stardom
For a girl who used to roam around on the streets without inhibition, it is a bit surreal. Now people identify me, ask for autograph, photographs and give direct praises. Also, I am a girl who never had any filters to my mouth. What is on my mind was what I had on my tongue. But this industry has taught me to be watchful of my emotions and words. Initially, when I used to read something unkind written about me, I used to get upset, wondering what would people think about me. But as I said, over the years, the industry has taught me the art of saying ‘Let go.’ I have realised that all these are distractions that hinder progress. The best way is to focus on one’s work and ignore those issues that are not in our control.

Working with Ram yet again
As I have worked with Ram before, I am extremely comfortable with him. We understand each other’s strengths as actors and enjoy a rapport that reflects on the screen. It is always a wonderful experience to work with him. He is an extremely focused actor and a cool guy.

Do you ever feel that you could have done better?
I am never satisfied. A day or two after doing the scene, some thought occurs to me. I start thinking that I could have done it better. As an actor, I am greedy.

Message to fans
I can not thank them enough. It is because of their love, I stand here. When I get appreciation, it further motivates me to perform better. It makes me feel responsible towards my profession. Moreover, I believe that the only way I can reciprocate their love is by doing my job well and by doing good roles.

The first thing you notice in a stranger?
Eyes and smile. I think both speak a lot about the person.

The first thought on waking up…
It is about Whiskey,
my pet.

What kind of music do you listen to?
Emotional, meaningful

What makes you angry?
Fake people

Sad?
When I am not being cared for.

Dream role?
I want to be a versatile.

A perfect day…
The day I fall asleep the moment I hit the sack.
Strongest quality I can mingle and chat with anyone.

If not an actress?
I am not sure, but something to do with the creative field.